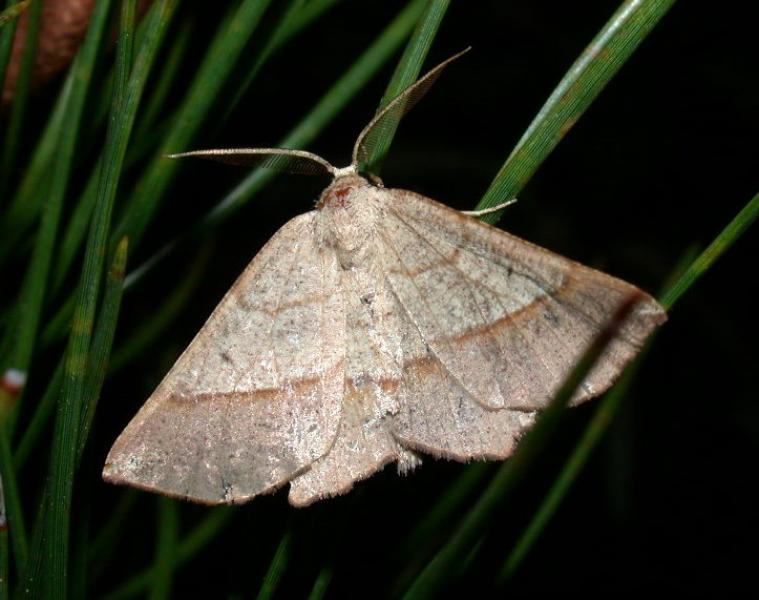 Euchlaena madusaria is not an extremely strong flier. It is thought to fly approximately 1 meter/second, or approximately 2.2 mi/hr (NatureServe 2010).

Euchlaena madusaria has not been found at many locations despite substantial trapping effort on Long Island. Three populations have been documented in Suffolk County since 1997. This moth is found locally in dry woodlands and adjacent scrublands, mostly in sandy or barrens areas. Additional surveys are needed to better understand its status and distribution in New York State.

The short-term trend for Euchlaena madusaria in New York State appears to be stable. At one of three populations documented in the state, moths were captured in 1997 and 2005, resulting in seven adults captured over the course of the two survey years. This indicates that the population is viable and reproducing. The other two populations were first documented in 1997 or 2007, respectively, and have not been surveyed since. Most of the populations are on protected land.

The long-term trend for Euchlaena madusaria in New York State is unknown. There are historical records from Yaphank. Surveys should be conducted in Yaphank to determine if a population still exists at that location.

Elimination and fragmentation of habitat by commercial and residential development are probably the most significant threats to Euchlaena madusaria. In addition, fire suppression and allowing succession to a more closed canopy may eliminate some suitable habitat in the Dwarf Pine Barrens.

Periodic controlled burns or mechanical removal of vegetation are needed to maintain the natural community at the Dwarf Pine Barrens. In addition, restricting ATV use and minimizing lighting to maintain dark sky conditions in occupied areas would be beneficial.

Additional research is needed to document larval foodplants and more precise habitat needs of Euchlaena madusaria. Additional inventory and monitoring is also needed. The species is best captured at blacklight or bait at night in dry woodlands and adjacent scrublands in sandy or barrens areas that contain larval foodplants, which are reported to include various trees (including oaks) and blueberry. In New York State, it has been captured flying most often in June, and also in late May and in early September. There are historical records of Euchlaena madusaria from Yaphank, and surveys should be conducted in Yaphank to determine if a population still exists at that location.

Euchlaena madusaria inhabits dry woodlands and adjacent scrublands in sandy or barrens areas that contain larval host plants, which are reported to include various trees (including oaks) and blueberry. In New York State, it has been found in several habitats including pitch pine-oak-heath woodlands, maritime heathlands, and dwarf pine plains.

Euchlaena madusaria is found in Suffolk County, with three populations documented in recent decades, and historical records from Yaphank.

Euchlaena madusaria is widespread in eastern Canada, and it is found locally, mostly in sandy or barrens areas in the United States south to southern New Jersey (NatureServe 2010).

This is a yellow-tan moth with thin, distinct antemedial, postmedial, and subterminal lines. The outer third of the forewing is darker with a pale mark at the tip. The edge of the forewing is smooth (Schmidt 2003). The wingspan is approximately 28 mm. The larvae are grey-brown and striped, and look like twigs (McGuffin 1981).

Adults are nocturnal and lay up to 225 eggs. Eggs hatch in approximately ten days. Larvae overwinter when they are almost mature (McGuffin 1981).

Larvae are reported to feed on various trees (including oaks) and blueberry.

The best time to see Euchlaena madusaria is during its flight season. In New York State, it has been captured flying most often in June, and also in late May and in early September.

The time of year you would expect to find A Geometrid Moth present and reproducing in New York. 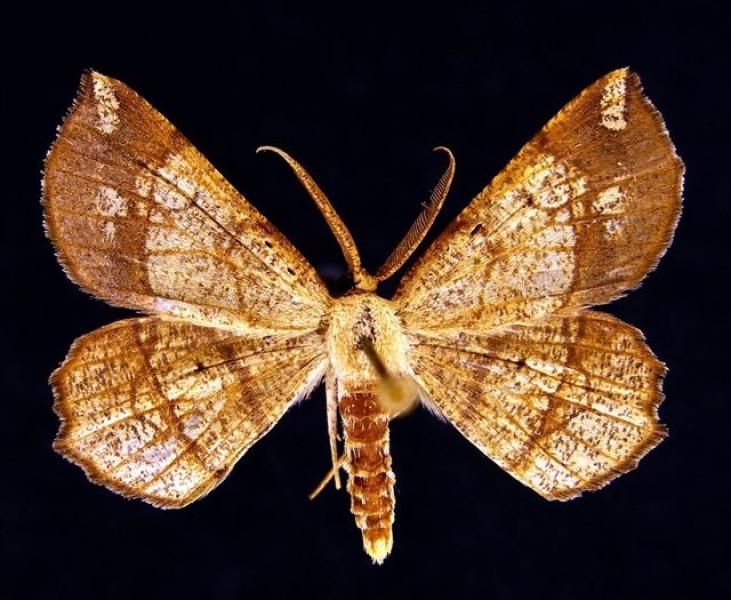