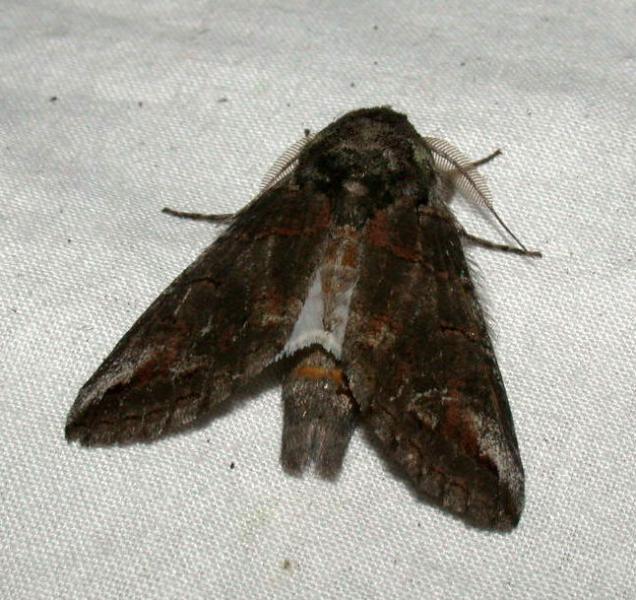 This species lives in habitats where hot fires can be common. The open oak scrublands where this species lives are "pyrogenic," meaning they require frequent fire to exist. Pupae of this species are found several inches deep in the ground, and they may overwinter there for three years. Thus, there is always a reservoir of pupae safe from even the hottest forest fires.

This species appears to be relatively stable over the past decade. The presence of this species over multiple years at the dwarf pine barrens site indicates that the population is viable and reproducing.

The numbers of this species on Long Island have probably declined from historical numbers due to habitat loss from development and the suppression of fires.

Known threats include habitat loss due to development and fire suppression, although the threat of development for the remaining habitat on Long Island may be low. The suppression of fires in barrens and other dry places would cause a loss of habitat for the species and therefore a reduction in population size. This species requires open woodland or barrens with pitch pine and scrub oaks. Forest fires are needed, on average, every 5-10 years (Jordan et al. 2003) to maintain this type of habitat. Lack of fires will result in the succession of this community to a closed-canopy forest of tall oaks and other hardwoods (Little 1979, Jordan et al. 2003). Conversely, a fire affecting an entire occurrence could eliminate most or all life stages that are present. For this particular species, though, larger populations are strongly buffered against short-term events of all kinds by the presence of pupae deep in the soil at all times, most of which wait two or rarely three years before emerging. Thus, unlike most Lepidoptera, this species could easily withstand 100% mortality of a larval cohort (NatureServe 2010).

The best management strategy for this species is the management of the natural community, or habitat, where this species occurs. Maintaining the Long Island pine barrens with their full suite of plant and animal species requires frequent (every few decades) disturbance to maintain open-canopy, shrub-dominated communities and to prevent succession to a closed-canopy hardwood forest (Jordan et al. 2003). Researchers have determined that an active fire management program utilizing prescribed fire with appropriate mechanical treatments is the preferred method (Jordan et al. 2003). Researchers have also determined that the size, type, intensity, and timing of fires (pyrodiversity) needs to be evaluated for each site to maximize benefits to the natural community and the species it supports (Jordan et al. 2003). The entire occupied habitat for a population should not be burned in a single year. For example, in places where prescribed burning is used, refugia (unburned areas) are needed for many species to ensure that any life stage can survive a fire. October to May burns are preferred for this species because the moths will be pupae in the soil during the fall and spring. However, larger populations are strongly buffered against short-term events of all kinds by the presence of pupae deep in the soil at all times, most of which wait two or rarely three years before emerging.

Additional surveys are needed with blacklight traps to determine the extent of the occurrence and locate new occurrences. This species comes to light in June and July, typically after midnight. In addition, research is needed on the response of this species to prescribed (controlled) burning and mechanical treatment to improve habitat.

In New York State, this species is found only on Long Island. The habitat is dwarf pine barrens. Scrub oak is the foodplant.

This species is restricted to Long Island, where it is documented from the dwarf pine barrens.

This species was historically known to be present from Martha's Vineyard, off Massachusetts (F.M. Jones specimens, University of Delaware) and is known to be present in Nantucket (Mark Mello in 2004); eastern Long Island, New York; the New Jersey pine barrens from about Lakehurst south to northern Atlantic County; part of the Maurice River ultraxeric sand system in Cumberland County, New Jersey; and a few localities in the southeastern and sandhills regions of North Carolina. At least historically it was also present farther south in South Carolina (McClellanville) and supposedly in Atlanta, Georgia (Dyar 1921). The latter more likely came from sand hill areas to the southeast of Atlanta. This species is not expected in Delaware, Maryland, or probably Virginia now, although it probably did occur in southeastern Virginia originally. It is often falsely reported from Florida (NatureServe 2010).

This species is a relatively robust moth. It is difficult to identify and needs to be confirmed by an expert in moth identification. Forbes (1948) describes the species as follows: males and larvae resemble the common H. obliqua, which is normally also present, but larvae and females can be identified by color and markings. This moth has a blue-gray color, with the thorax and base of the costal margin a contrasting pale gray. The hind wing is pure white.

The adults are active from mid-June to mid-August in the dwarf pine barrens of Long Island. The pupae of this species can exist for many years buried in the ground.

The time of year you would expect to find A Prominent Moth present and reproducing in New York.