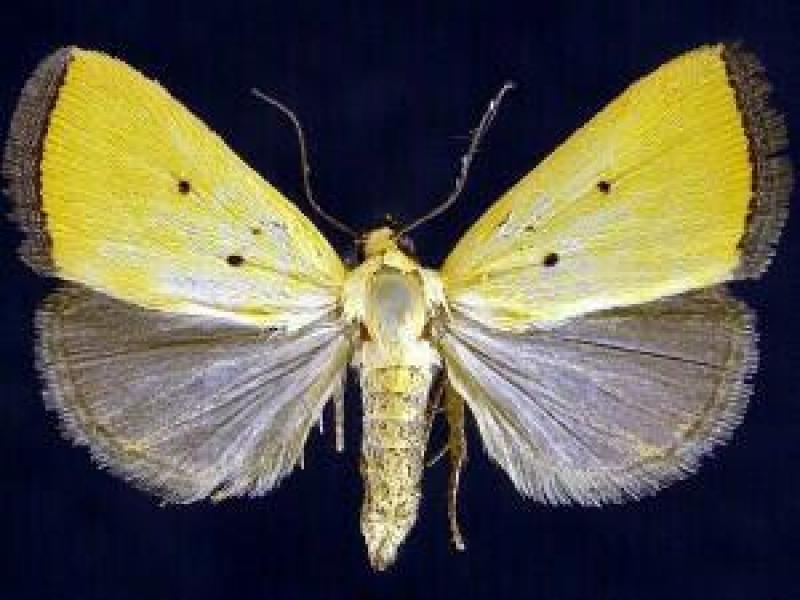 When handled "roughly," the caterpillar of this species can wriggle violently in addition to regurgitating a yellow-green fluid (Wagner et al. 2011).

There are two extant occurrences on Long Island which is the northern portion of its range.

Insecticide use should be avoided when possible if rare species are present. When insecticide use cannot be avoided, careful planning along with consistent rare species monitoring, can result in successful eradication of the target species without eliminating rare species. A biocontrol alternative is Bacillus thuringiensis (Btk) for some target species, such as spongy moths. However, sensitivity to Btk varies among native species and this option should be fully researched for treatment timing and regimes and weighed with other options to have the least impact on native lepidopteran populations (Schweitzer et al. 2011).

In New York, black-bordered lemon moths have been found at the edges of the following habitats: maritime heathland, maritime dunes, maritime grassland, and sea level fen.

This species has been found in Suffolk County, Long Island, the northern part of its range.

Black-bordered lemon moths can be found from Massachusetts to Florida, west to Missouri and Texas (Covell 1984).

Feculae can be "thrown" from the caterpillar's perch with a whip of the terminal abdominal segments. When handled "roughly," the caterpillar of this species can wriggle violently in addition to regurgitating a yellow-green fluid (Wagner et al. 2011).

Known foodplants include crabgrass and morning glories (Covell 1984). Wagner et al. (2011) stated that caterpillars feed on panic grass and bluegrass while in captivity.

The time of year you would expect to find Black-bordered Lemon Moth present and active in New York.