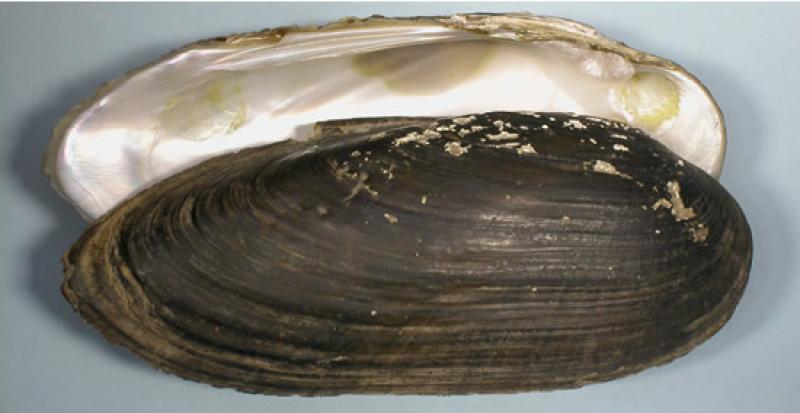 The thick, lustrous shell of this species was highly valued by the pearl button industry in the early 1900s.

This species is currently known from only 7 different creeks or rivers statewide and of those only 2 or 3 consist of healthy, viable populations. Although it has been found more recently in creeks where it was not formerly known in western New York, some of these are only old weathered shells or of poor population viability and likely do not represent range expansions, but rather increased survey effort. The primary host fish species (Sauger) itself is rare and narrowly distributed in the state.

It appears that this species was never common in New York. However, because of the widespread degradation of water quality since the industrialization of the state it can be safely assumed that this species previously had a much wider distribution, and higher abundance levels. Seventy-three percent of the records shown by Strayer and Jirka (1997) are from pre-1970. Black Sandshells were already apparently very uncommon in both the Great Lakes (Schloesser and Nalepa 1994) and St. Lawrence (Ricciardi et al. 1996) basins prior to the Zebra Mussel invasion.

Strayer and Jirka (1997) suggested that because much of this species' range had not been adequately surveyed, its status wasn't well known. More recent surveys in western New York have found them in creeks from which they were not previously known (Marangelo and Strayer 2000).

The single most important cause of the decline of freshwater mussels during the last century is the destruction of their habitat by siltation, dredging, channelization, impoundments, and pollution. A healthy fish assemblage is critical to viable mussel populations and dams have resulted in heavy losses of mussels, mainly due to elimination of host fish species. Rarity and decline in New York of the primary host fish species (Sauger) is likely to account for the ongoing threats to this mussel (Khym and Layzer 2000). Erosion due to deforestation, poor agricultural practices and the destruction of riparian zones, causes an increase in siltation and shifting substrates that can smother mussels. Domestic sewage, effluents from paper mills, tanneries, chemical industries and steel mills, acid mine runoff, heavy metals, and pesticides have all been implicated in the destruction of the native mussel fauna.

The effects of PCBs and other toxic chemicals, and general water pollution, should be investigated for their potential role in the decline of this species. When feasible, the removal of impoundments in order to restore rivers to their natural flow would be beneficial since these structures negatively affect required fish host species as well as the mussels themselves. Khym and Layzer (2000) suggested that infecting any sportfish (especially Sauger/Walleye) with glochidia prior to release could be a good opportunity to augment populations.

There is still much to learn about this species in New York, especially determination of the primary host fish species and whether the closely related Walleye and Sauger can serve equally well as primary hosts. Details about habitat requirements (current speed, water depth, substrate grain size, substrate stability, water temperature, and water quality factors) also need work. However, Strayer et al. (1994) found that the distribution of Unionids was not related to these typical physical habitat qualities, but instead was related to long term stability of the substrate (i.e., flow refuges) and other large-scale habitat variables such as riparian zone vegetation (i.e., grassy vs. forested). Both large and smaller scale forces promoting the patchy occurrence of Unionid mussel beds is an active area of research (Strayer et al. 2004).

Black Sandshells are typically found in medium-sized to large creeks and rivers in locations with a strong current and substrates of coarse sand and gravel with cobbles in water depths from several inches to six feet or more (Parmalee and Bogan 1998).

There are three general areas of occupancy in New York, reflecting the routes of entry into the state: the Allegheny, Great Lakes, and Champlain basins (Strayer and Jirka 1997). Within the Allegheny drainage the species is known from the Allegheny River in the vicinity of Olean and Portville, as well as two of its major tributaries, the Cassadaga and Conewango creeks. In the Great Lakes basin, there are old records from Lake Erie, but more recently a thriving population was located in Tonawanda Creek along the border of Niagara and Erie counties (Marangelo and Strayer 2000). Several pre-1970 records are also known from the Erie Canal and Oneida Lake (Strayer and Jirka 1997) and shells were found in 1993 and 2008 (Mahar and Landry 2020). Live mussels were found south of Oneida Lake, in Chittenago Creek at Bridgeport. The St. Lawrence basin population seems to be the most precarious, since only pre-1970 records are known from the St. Lawrence River (Strayer and Jirka 1997), and small population are found in the Grass, Oswegatchie, and Raquette rivers. Finally, a small population also occurs on the Poultney River, a tributary of Lake Champlain. Sauger was found to be the primary host for this mussel (Khym and Layzer 2000) and the mussel's distribution within the state does follow the general distribution this rare fish.

This species is widespread in the eastern and central U.S. and Canada, occurring from the Great Lakes basin south into the Mississippi River drainage to Louisiana and in some Gulf Coast drainages (Parmalee and Bogan 1998).

This mussel has a thick, subelliptical, elongate shell reaching about 20 cm long. The periostracum is dark green and shiny with rays in younger animals, but in older specimes it is dark brown to black. The hinge teeth are heavy; pseudocardinals triangular or slightly compressed. The nacre is most often white, but can be pinkish or purple. The shells of females are broader and more rounded posteriorly than those of the males (Strayer and Jirka 1997).

The shells of this species are distinctively large, heavy, and elongate with a black periostracum and strong hinge teeth (Strayer and Jirka 1997).

Adults of this species are sessile with only limited movement in the substrate. Passive downstream movement may occur when they are displaced from the substrate during floods. More major dispersal occurs while glochidia are encysted on their host(s). Being ectothermic, activity levels of mussels are presumably reduced greatly during colder months of the year. Gravid females of Ligumia display marginal papillae to attract fish hosts for their parasitic larvae. The moving displays attract fish which readily attack displaying females, causing them to release glochidia onto the gills of the fish (Corey et al. 2006).

Little is known about the activity periods of Unionid mussels but they are presumed to be greatly reduced during cold times of the year. Freshwater mussels are most often easiest to locate during late summer when water levels are lowest. This species is a long-term breeder; its gravid period overlaps in different individuals and extends nearly year round (Clarke 1981).

The time of year you would expect to find Black Sandshell reproducing in New York.

Information for this guide was last updated on: March 5, 2009