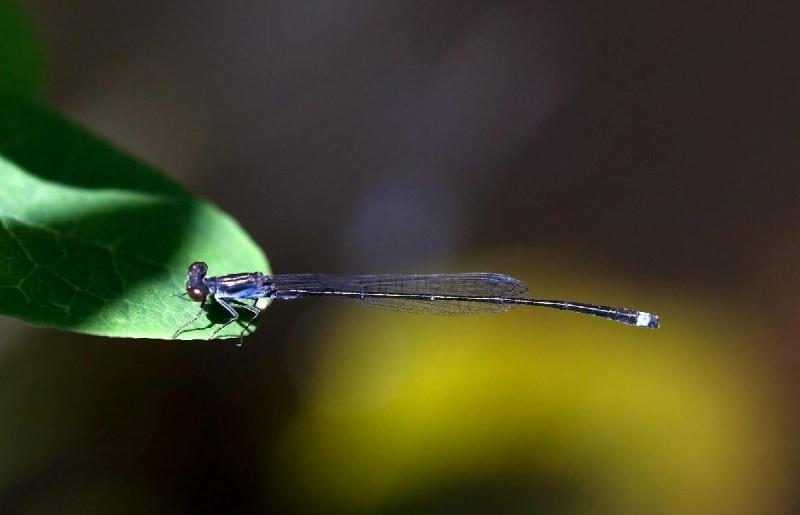 The immature male Blackwater Bluet is similar in appearance to the adult female until it matures later in the flight season (Lam 2004). This is true for many odonate species, but male and female reproductive structures remain distinctive throughout their lives.

In New York, Blackwater Bluets have only been confirmed at two locations in Suffolk County within one kilometer of each other, likely representing a single metapopulation (New York Natural Heritage Program 2011a). In addition to a highly restricted range in New York, there are a number of threats at the locations where it is known to occur (see Conservation and Management section).

The Blackwater Bluet was first documented in New York in 1998 and has since been observed at locations in Suffolk County (New York Natural Heritage Program 2011a). Sightings of this species are fairly recent and rare in New York; therefore, short-term trends are unclear.

Recent observations since the late 1990s have been made at two locations on Long Island, but information prior to this is not available for New York (New York Natural Heritage Program 2011a). Since observations are fairly recent, long-term trends are unclear.

Any activity which might lead to water contamination or the alteration of natural hydrology could impact Blackwater Bluet populations (NYS DEC 2006). Such threats might include roadway and agricultural run-off, ditching and filling, eutrophication and nutrient loading from fertilizers, herbicides, and septic systems, changes in dissolved oxygen content, and development (NYS DEC 2006). Groundwater withdrawal is a potential threat in lentic habitats on Long Island (New York Natural Heritage Program 2011). The introduction of grass carp is also a threat to coastal plain ponds on Long Island (New York Natural Heritage Program 2011b). In addition, both emergence rates and/or species ranges may shift for odonate species as a result of climate change (Kalkman et al. 2008).

Any efforts to reduce roadway and agricultural run-off, eutrophication, development of upland borders to ponds and resulting increased groundwater withdrawal, invasive plant and animal species, trampling of vegetation from recreation, and ditching and filling activities should be considered when managing for this species (NYS DEC 2006, White et al. 2010). Maintenance or restoration of native shoreline vegetation and surrounding upland habitat should benefit this species, as females in this genus require native emergent vegetation for successful reproduction and spend much of their time in upland habitats away from the breeding pond (Gibbons et al. 2002, White et al. 2010).

Further inventory is needed to define the extent of populations of Blackwater Bluets in New York, and additional survey work in streams, rivers, and coastal plain ponds on Long Island could reveal new populations. In addition, research is required to understand the habitat requirements of this species, and to create appropriate management guidelines for its persistence in known locations (NYS DEC 2006).

Throughout the Northeast, Blackwater Bluets are found in streams and rivers and more rarely in lakes (Lam 2004). However, the two New York sites are coastal plain ponds; one is surrounded by coastal plain poor fen (New York Natural Heritage Program 2011a).

New York lies near the northern edge of the species' range. There are only two known populations in Suffolk County where Enallagma weewa occurs, and these are separated by approximately one kilometer from each other (New York Natural Heritage Program 2011a).

Blackwater Bluet has a total known range in the eastern U.S. along the Atlantic and Gulf coastal plain, from Louisianna northward to Rhode Island (Abbott 2007, NatureServe 2010).

New York has 23 species in the genus Enallagma (White et al. 2010). However, most Bluets have more blue on their bodies than the Blackwater Bluet. Adult males are mostly black on the head, thorax, and abdomen except for a pale gray color on the sides of the thorax and a blue abdominal segment nine (Lam 2004). Females and immature males have a black head with a narrow blue band behind the eyes. The thorax has a brown mid-dorsal stripe, with blue, brown, and black shoulder stripes, and pale blue below. The abdomen is dark above, pale blue below, but abdominal segment 10 and most of nine are blue (Lam 2004).

Males have dark bodies with a blue tip on abdominal segment nine (Lam 2004).

In New York, adult Enallagma weewa have been documented from July through the first half of August (Donnelly 1999, White et al. 2010). New Jersey flight dates range from the first part of June through mid-September (Bangma & Barlow 2010).

The time of year you would expect to find Blackwater Bluet present and reproducing in New York.