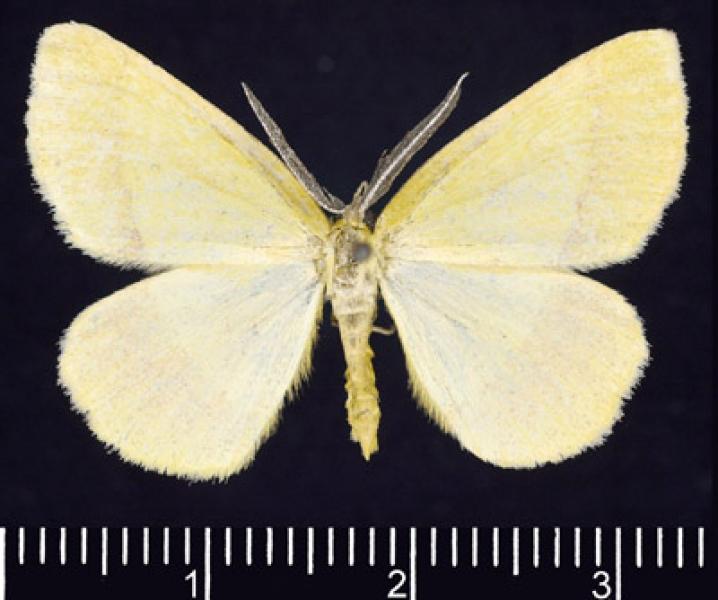 The foodplant, New Jersey Tea, of the Broad-lined Catopyrrha larvae was once so common that it was commercially important, especially around the time of the American Revolution. Now the plant is so reduced that this moth, another related species, and a skipper butterfly whose larvae feed on the leaves of the same plant are probably gone from New Jersey, most of New York, and neighboring states. The Albany Pine Bush is probably the only place in the Northeast where all three still occur. Excessive browsing by deer and loss of brushy and barrens habitats are among the factors in this decline.

The Broad-lined Catopyrrha is currently found in the Albany Pine Bush and possibly in Saratoga County. This species was formerly much more widespread than it is now. Like other New Jersey Tea (Ceanothus americanus) specialists, the Broad-lined Catopyrrha has become very rare or disappeared in all neighboring states. Outside of New York, only two other occurrences are known to be extant east of Ohio.

Given the decline in Mottled Duskwing (Erynnis martialis) populations, which feed on the same plant, and the damage to the foodplant (New Jersey Tea) by deer and other factors at the Albany Pine Bush, there is little doubt this moth is also declining.

Long-term trends suggest a large to very large decline (75% to greater than 90%) in the population of this species due to decline of habitat and its food plant.

Habitat loss and fragmentation are the largest threats to this species, mostly because its host plant New Jersey Tea (Ceanothus americanus) is less common than it once was in its native range due to habitat degradation and over browsing from deer (Schweitzer et al. 2018). Additionally, both the lack of fire and too frequent prescribed burning has the potential to cause mortality for this species (Schweitzer et al. 2018). Further concerns are with the use of biochemical and biological controls for invasive Spongy Moth (Lymantria dispar), such as Bt (Bacillus thuringiensis - a bacterial biological control used on Spongy Moth caterpillars). It is uncertain how sensitive Broad-lined Catophyrrha larva are to Bt and therefore has the potential to pose a threat as with many other Lepidoptera (Schweitzer et al. 2018).

The best management strategy for this species is the management of the natural community, or habitat, where this species occurs. Researchers have determined that "an active fire management program utilizing prescribed fire with appropriate mechanical treatments" is the preferred method in pitch pine-oak forest communities (Jordan et al. 2003), such as those occuring in inland pine barrens. Researchers have also determined that the size, type, intensity, and timing of fires (pyrodiversity) needs to be evaluated for each site to maximize benefits to the natural community and the species it supports (Jordan et al. 2003). The pitch pine-oak forest community, where this moth occurs, requires moderate intensity fires. The entire occupied habitat for a population should not be burned in a single year (Schweitzer et al. 2018). For example, in places where prescribed burning is used, refugia (unburned areas) are needed for many species to ensure that any life stage can survive a fire. Consider planting New Jersey Tea at restoration sites if it was a native to the ecosystem. Additionally, white-tailed deer (Odocoileus virginianus) populations should be managed to reduce over browse of host plants. If biochemical or biological control (such as Bt) is to be used in known occupied habitat, New Jersey Tea should not be sprayed and it should be delayed until larvae have matured into adults to limit mortality (Schweitzer et al. 2018).

In New York, the only known extant population of this species is a cluster of colonies in the Albany Pine Bush (inland pine barrens). However, this species should be looked for at any habitat that has or recently had the Mottled Duskywing which uses the same foodplant (New Jersey Tea). As this species declined and disappeared from the Northeast, the last few known locations were mostly on inland pine barrens. Historically, this species was not limited to such places. In adjacent states and provinces, habitats also include or included oak savannas, openings in oak woodland, trap rock glades, and serpentine barrens. The Broad-lined Catopyrrha might occur on alvars or even old fields that have an abundance of the foodplant.

This species was once thought to be widespread in New York (Forbes 1948) though is now only known to be extant at one location in Albany County (Albany Pine Bush).

The current global distribution is uncertain. It formerly occurred in New England and New Jersey, and is currently found near Albany, New York, southeastern Pennsylvania west to about Minnesota and south into Georgia and Texas. The species has disappeared in some other peripheral areas and it appears to have had very few occurrences in Kentucky and probably other places in the center of the range.

This species has a wingspan of 2.7-3.7 cm and is characterized by dull gray to brown wings during a spring brood (Covell 1984). During a summer brood its wings will be a straw yellow to olive in color (Covell 1984). Underside of the wings are yellow or tinted pink during its summer form. Antemedial (am.) and median lines vary. Postmedial (pm.) lines are complete and curve outward covered in diffuse spots beyond the midpoint (Covell 1984).

This is a medium-sized pale or grayish geometrid moth with a distinctive yellow and pink underside. The very plain appearance above with the two diffuse but obvious lines on the forewing are also distinctive. Note that the male also has pectinate (parallel projections or divisions) antennae. While the color above varies, this moth is easily identified from pictures. Flushing a moth from New Jersey Tea from May to July is an immediate clue that it may be this species.

The best life stage for identification is the adult stage, but larvae could be identified by an expert.

The adults can be flushed from New Jersey Tea clumps or nearby in the daytime. They are also active at night and come to lights and, in the summer, to sugar baits.

There are two broods in mid or late May to early June and much of July; a few may be present earlier in spring or later in June. This species overlaps with the Mottled Duskywing and with both broods of Karner Blue (Plebejus melissa samuelis).

The time of year you would expect to find Broad-lined Catopyrrha reproducing, larvae present and active, and pupae or prepupae present in New York.

This species has gone by other generic names especially Catopyrrha. McGuffin, in the Geometridae of Canada, used the species name Cruentaria, which all other authors have applied to a more common southern species. The name Erastria was misapplied to a group of Noctuidae for decades and that is the more familiar usage.