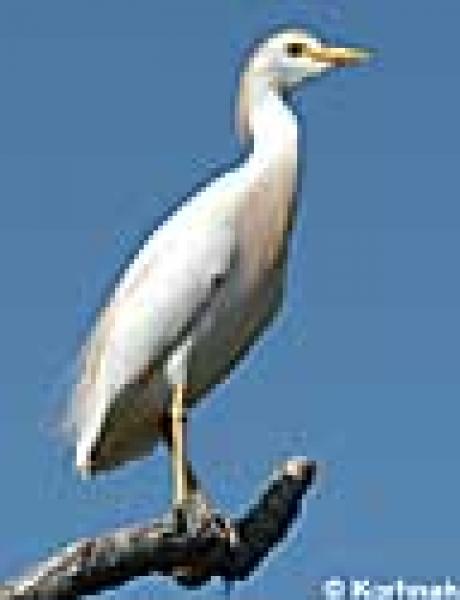 Cattle egret is so named due to it being commonly found foraging among livestock and other grazing animals. In other parts of the world where it is found, the cattle egret is named after the animal with which it is commonly found (Elephant Egret or Rhinoceros Egret, to name a few) (Telfair 2006).

New York is near the northern limit of the Cattle Egret's breeding range, with breeding populations being restricted to a few islands in Lake Champlain and Southern Long Island (McGowen and Corwin 2008; New York Natural Heritage Program 2009).

Since the 1980s, populations of cattle egrets in New York have been on a steady decline. During the Breeding Bird Atlas surveys, the number of confirmed breeding blocks declined from eight during the 1980-1985 surveys to five during the 2000-2005 surveys (McGowan and Corwin 2008). Once reported in the 100s on Long Island (Kerlinger 2004), cattle egrets have dwindled to an average of one pair per year since the early 2000s. The birds have not been observed as nesting upstate since the mid 1990s. A recent survey conducted in 2007 on Long Island showed an average of one breeding pair of cattle egrets at two of the 14 known colonies (New York Natural Heritage Program 2009).

The cattle egret range continues to expand worldwide, with populations in the United States fluctuating over the last 40 years; however, Atlantic Coast populations have been on a steady decline since the 1970s-1990s (Telfair 2006; Sauer et al. 2007). The cattle egret was first reported as breeding in New York on Gardiners Island in 1970 (Puleston 1970). During the late 1970s they were also reported breeding upstate at two locations: Four Brothers Islands in Lake Champlain and Little Galloo Island in eastern Lake Ontario (Bull 1976).

Degradation of breeding and foraging habitat is the greatest threat to cattle egrets (McCrimmon 2006). Other threats include flooding, development, disturbance of nesting areas by human activity such as boating, fishing, dredge spoil deposition, and predation primarily by gulls, fox, and raccoons (New York Natural Heritage Program 2009).

Continue to develop and conduct management and habitat restoration plans along with state, local, and federal partners. Continue to monitor populations and discuss ways to improve survey methods. Compare state population trends against regional trends to determine population dynamics across various geographic areas and time periods. Consider developing and initiating a banding program to get a better handle on breeding populations and migratory patterns (McCrimmon, Telfair 2006).

More information is needed regarding migration (timing and routes), fidelity to breeding, and foraging sites (Telfair 2006). Identify all potential threats including those created by human disturbance as well as predators, pathogens, and invasive species and seek ways to diminish their impact (McCrimmon 2006).

Cattle Egrets are colonial nesters, nesting with other species of herons in trees and shrubs of upland woodlands, swamps, or vegetated islands in both inland and coastal areas (Telfair 2006). In New York, Cattle Egrets breeding on Long Island utilize non-barrier and dredge spoil islands that are thickly vegetated with trees, shrubs, and vines (New York Natural Heritage Program 2009). The population in the Adirondacks breeds on relatively flat islands composed of pine and mixed hardwoods (New York Natural Heritage Program 2009). Cattle Egrets typically forage among grazing animals in agricultural fields and grasslands (Custer and Osborn 1978; Telfair 2006). They have also been observed foraging in trees and shrubs (Kushlan 1979).

A native of Africa, the Cattle Egret's rapid range expansion has resulted in this species being found breeding on every continent except for Antarctica, although it has been spotted flying near islands off its coast. In the United States, it is found in every state except for New Hampshire, West Virginia, Montana, and Washington (Telfair 2006). Cattle Egrets that nest in the northern part of North America generally winter in the southern states, with Florida and southern California harboring the largest concentrations of them in the winter (Telfair 2006; NatureServe 2009).

The Cattle Egret is a stocky, small to medium-sized egret averaging 50 cm in length with a wingspan of 85-95 cm and a body mass of 270-500 g (Telfair 2006). The bill and neck are shorter and thicker than most other egrets (Peterson 1980). Non-breeding adults are mostly white with a pinkish-orange crest. The bill and iris are yellow and legs are dark green. In breeding adults, plumes on the breast, crest and back become salmon in color. The iris becomes a deep yellow, the bill turns orange-red, and the legs change to yellow-green and even deep red for a brief time (Telfair 2006). Juveniles are all white except for the light tan-colored crown on top of their head. Their legs and bill are black and their eyes are yellow. Hatchlings are semialtricial with olive to blue-gray skin and are covered with white down on the head and back. The feet, legs, and bill are tan. The eggs are elliptical in shape ranging from 30-55 mm in length and light blue in color, gradually becoming lighter before hatching. The shell texture is matte and smooth. Nests are bowl-shaped composed of sticks, twigs, and vines and are sometimes lined with herbaceous material. Cattle egrets typically vocalize only at the breeding colony, with the most common adult vocalization sounding like a throaty rick-rack. The chick begging call sounds like a high-pitched zit-zit (Telfair 2006).

The thick neck and salmon-colored plumes on the head, breast, and back of adults during breeding season make the cattle egret distinguishable from other white herons and egrets.

Cattle egrets can be easily identified when the adults are in their breeding plumage.

Populations of cattle egrets in the northern part of their range including New York are migratory, arriving at their breeding grounds between March and early May. Pairs form shortly after arriving. Eggs are laid a few weeks later at two-day intervals, taking about a week to put down a full clutch of three to five eggs (Weber 1975; Telfair 2006). Incubation ranges from 22-25 days with both male and female taking turns incubating. Hatching is asynchronous and occasionally results in mortality of younger chicks (Weber 1975). Cattle egrets typically forage in groups among grazing mammals, sometimes seen riding on the animal's back. They leave the colony after sunrise, feed to mid-afternoon, then return to the colony an hour after sunset (Siegfried 1971). The most common foraging technique involves walking slowly and then making quick jabs at their prey. Birds that forage among grazing mammals have been shown to be more successful at catching prey and use less energy than those that forage alone (Dinsmore 1973; Grubb 1976).

Cattle egrets forage for a variety of organisms. Common foods taken are spiders, grasshoppers, crickets, caterpillars, and earthworms (Seigfried 1971; Fogarty and Hetrick 1973). If foraging near water, frogs and small fish will be consumed. Cattle egrets have also been known to consume small passerine birds and rodents (Seigfried 1971).

Cattle Egrets can be found breeding in New York from late May to early August (Telfair 2006).

The time of year you would expect to find Cattle Egret active and reproducing in New York.