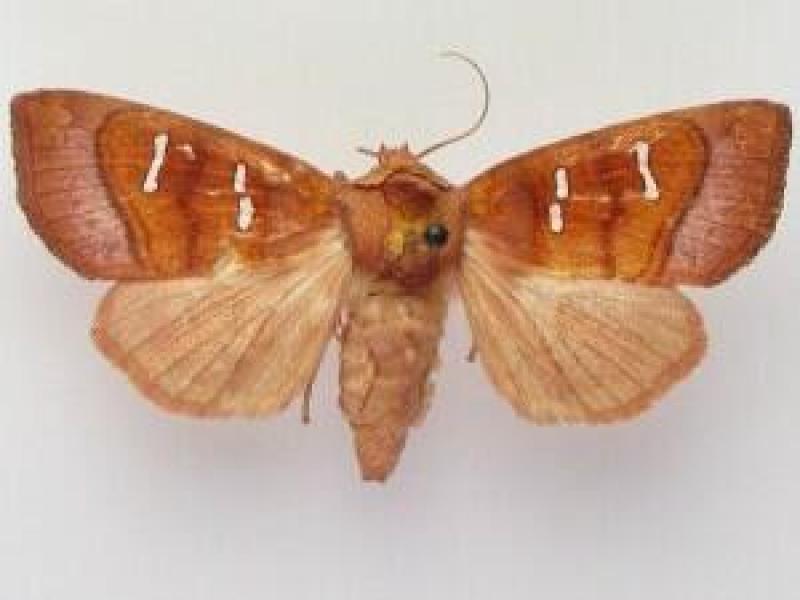 State Conservation Status Rank
S1?
Critically Imperiled in New York (most likely) - Conservation status is uncertain, but most likely especially vulnerable to disappearing from New York due to extreme rarity or other factors; typically 5 or fewer populations or locations in New York, very few individuals, very restricted range, very few remaining acres (or miles of stream), and/or very steep declines. More information is needed to assign a firm conservation status.
Global Conservation Status Rank
G4
Apparently Secure globally - Uncommon in the world but not rare; usually widespread, but may be rare in some parts of its range; possibly some cause for long-term concern due to declines or other factors.

Most species in the genus Papaipema seem to have declined since the 1970s, except a few. Exceptions include the Chain Fern Borer Moth, others whose larvae feed on ferns, and the Flypoison Borer Moth. This fact strongly indicates that the overabundance of deer in recent decades has contributed to the decline of most Papaipema species. This is because deer severely browse the larval foodplants of most Papaipema species, but deer generally do not severely browse ferns or the flypoison plant, which are the larval foodplants of the species not known to have declined (NatureServe 2010).

One population of the chain fern borer moth is documented. The population has not been surveyed since 1987, when one individual was captured. Potential habitat (wetlands that contain sizeable stands of Virginia chain fern, the larval foodplant) exists throughout much of New York State. However, in parts of the state, its distribution is very limited (Weldy and Werier 2010). The Chain Fern Borer Moth is known to be confined to certain areas throughout its range (D. Schweitzer, personal communication). In general, species in the genus Papaipema tend to not occupy many apparently suitable habitats, for unknown reasons. Some, many, or all habitats for the Chain Fern Borer Moth may be suitable only in certain years, depending on water levels. Also, in any given area, some habitat patches may be occupied in some seasons, and others in other seasons (NatureServe 2010). Additional surveys are needed to better understand the status and distribution of this moth in New York State.

The short-term trend for the chain fern borer moth in New York State is unknown. The one documented population was surveyed once in 1987 and not since. One individual was captured at the site. The larval foodplant, Virginia chain fern (Woodwardia virginica), appeared to be in decline at the site.

The long-term trend for the chain fern borer moth in New York State is unknown. Some habitat has probably been lost, but the original range and abundance are unknown.

In general, anything that kills or stunts the larval foodplant, Virginia chain fern (Woodwardia virginica), is a threat. The most obvious threat is habitat loss. In addition, hydrological alterations in occupied wetlands could destroy the ferns. Herbicide use along transportation and utility corridors could damage Woodwardia virginica in nearby occupied wetlands. The spread of invasive plants might be a threat. Mosquito spraying may be a threat, as well. Where this species is occupying multiple small habitat patches as a metapopulation, artificial lights (including bug zappers) operating in the early fall could disrupt necessary movements between these patches (Eisenbeis 2006; Frank 2006). This could cause fern patches where a local colony dies out to remain unoccupied, and this could eventually eliminate the entire population.

Occupied wetlands should be evaluated to minimize encroachment and fragmentation by development. This is because 1) several species in the genus Papaipema tend to not occupy small habitat patches and 2) surrounding natural areas serve as buffers that reduce the impact of sediments, nutrients, and pollutants entering wetlands in stormwater runoff. A general recommendation for species in the genus Papaipema is that five to ten hectares of habitat should be conserved at a site in order to safeguard a population against assumed events, human disturbance, or intense localized predation in some places in some years, which tends to vary from season to season. For species that are not prone to severe disturbances, such as the Chain Fern Borer Moth [which is relatively less prone to deer herbivory of its larval foodplant, Virginia chain fern (Woodwardia virginica)], smaller habitats that contain dense stands of the foodplant can support viable populations (NatureServe 2010). In occupied areas, the following practices would be beneficial: 1) maintaining the natural hydrology, 2) restricting herbicide and insecticide spraying, and 3) conducting forestry practices, and transportation and utility corridor maintenance practices, in a way that minimizes negative impacts to occupied wetlands. In areas where artificial lighting is necessary, using sodium lights or other low ultraviolet lamps would be beneficial. Controlling invasive plants that threaten Woodwardia virginica would be beneficial. Monitoring deer herbivory in more upland habitats may also be beneficial. Although deer generally do not severely impact ferns, they sometimes do eat the young fronds in May. If they eat a lot of the fronds in the spring, they might be significant predators on young larvae.

The chain fern borer moth occurs in wetlands such as acid bogs, fens, swamps, edges of ponds, wet thickets, and swales (Weldy and Werier 2010) that contain persistent, abundant or numerous, patches of Virginia chain fern (Woodwardia virginica), the larval foodplant (Hessel 1954; Covell 1984; Wagner et al. 2008). In general, species in the genus Papaipema tend to not occupy many apparently suitable habitats, for unknown reasons. Some, many, or all habitats for the Chain Fern Borer Moth may be suitable only in certain years, depending on water levels. Also, in any given area, some habitat patches may be occupied in some seasons, and others in other seasons (NatureServe 2010). In New York State, the moth was documented to occupy a swale containing a nearly pure, dense stand of Woodwardia virginica.

The chain fern borer moth is distributed in eastern North America in the coastal states from Massachusetts to southern Florida. It is possible there are some gaps. Its distribution does not extend inland.

The chain fern borer moth has orange forewings that include some brown and purple shading. The brown median line is slightly bent. The postmedial line is double and slightly rounded. The most distinctive feature is that all three spots on the forewings are white, and they form narrow vertical bars. The orbicular and claviform spots are almost joined. The hind wings are yellow with grayish-brown veins, and the outer portions are shaded. The wingspan is 35-40 mm (Covell 1984). Frass of larvae is orange (Hessel 1954; Wagner et al. 2008). The early instars (stages) of many larvae in the genus Papaipema are colorful, with rings or whitish stripes on a maroon, pink, purple, or brown body. Later instars become whiter (Wagner et al. 2008). The species is most easily identified as an adult moth (Wagner et al. 2008; NatureServe 2010), and its identification should be confirmed by an expert if based on a photograph or sign other than an adult specimen (NatureServe 2010).

The adult is the best life stage for identification (Wagner et al. 2008; NatureServe 2010).

The best time to see the chain fern borer moth is during its flight season, generally from late August-early October (Covell 1984; Wagner et al. 2008). In New York State, the moth has been documented to fly in early October.

The time of year you would expect to find Chain Fern Borer Moth present and reproducing in New York.

Hessel, Sidney, A. 1954. A guide to collecting the plant-boring larvae of the genus Papaipema (Noctuidae). Lepid. News. 8: pp. 57-63. Note a corrected version is included as Appendix D of the Lepidopterists' Society's basic techniques manual (Winter, 2000).