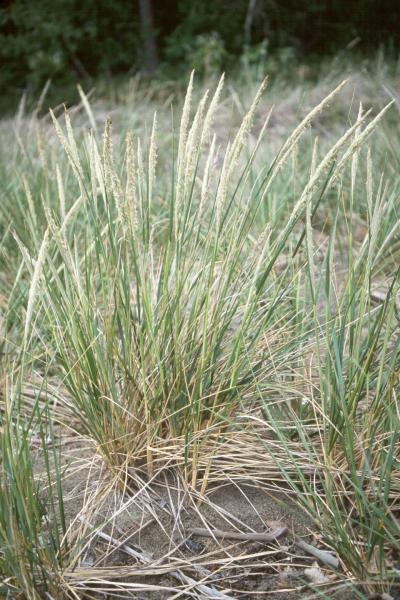 Based on the current circumscription, there is an estimate of six known populations. Most of these are threatened at some level by the introduction of the Cape strain (Ammophila breviligulata). This introduced strain is more aggressive and may genetically swamp the true native population. There are also numerous development and recreational activities that may threaten these populations.

The number of populations is stable and no more populations are expected. Within the Great Lakes, populations of the more vigorous Cape strain (Ammophila breviligulata) are probably outcompeting and reducing numbers of the true native Champlain strain but the speed of this reduction is not known.

Development at the Plattsburgh population and along the Lake Erie and Lake Ontario shorelines has substantially reduced numbers of plants from historical levels by cutting off natural dune formation and by introducing Cape strain (Ammophila breviligulata) that has outcompeted the native dune grass.

Beach erosion and the development of a park at the Plattsburgh population threaten regeneration. The plants along the Great Lakes shorelines are threatened by the introduction of the Cape strain (Ammophila breviligulata) that outcompetes the native dune grass.

Along the Great Lakes shores, the non-native Cape strain (Ammophila breviligulata) needs to be eliminated and replaced with the native species. The dunes in Plattsburgh need to be monitored every five years to evaluate how this grass is regenerating.

Research needs to be done on how this species competes with the more vigorous Cape strain (Ammophila breviligulata) and how this applies to management needs. Can this grass be grown, planted, and used as a viable restoration species for Great Lake and Lake Champlain dunes?

A beachgrass found on the sand beaches and dunes along Lake Champlain and the eastern shore of Lake Ontario, particularly on the top and front sides of the low lake dunes (New York Natural Heritage Program 2002). Dunes and dry sandy shores (Gleason & Cronquist 1991, under Ammophila breviligulata).

Based on the current circumscription, this beachgrass is limited to the shores of Lake Champlain and the eastern shore of Lake Ontario. A few reports exist for the Lake Erie region, but to date all reports have turned out to be transplanted populations of the Atlantic beachgrass (Ammophila breviligulata).

As a recently described species, the global distribution of this plant has yet to be fully determined. At a minimum, the distribution of this plant is limited to Lake Champlain and the eastern shore of Lake Ontario. The range could be as broad to include all the plants (true native populations only, excluding plants originating from non-Great Lake seed sources) throughout the Great Lakes, St. Lawrence Seaway, and the coast of Newfoundland (Peter Baye pers. comm).

Champlain dune grass dominates the small dunes of Lake Champlain and portions of Lake Ontario. Long rhizomes produce many clumps that can be scattered in the sand or tightly arranged to cover the dune. Many long, flexible, very narrow leaves arise like a fountain from a central clump. They are flat at the base but the margins become inrolled toward the narrow sharp tip. One to many flowering stems grow from the base of the clump and reach 2-3 feet in height. They produce many flowers arranged in a compact spike-like inflorescence 13-21 cm long in the top half to one-third of the stem. A so-called flag leaf arises just below the inflorescence and measures 8-22 cm long. The yellow anthers give the inflorescence its color as they hang out of the flowers. When the flowers mature and senesce they turn tan to brown. Reproduction is primarily vegetative and seed production and seedling survival is very low. Flowering stems are seen more often in moving sand near the water and can be absent in plants that persist in sand that has been stabilized for many years.

This beachgrass is native to Lake Champlain and the Great Lakes. The flag leaf is 8-22 cm long. The compact panicle is about 9-17 cm long, linear-cylindric, and abruptly ended, not attenuate. It tends to flower earlier (late June through early July) than Ammophila breviligulata.

Ammophila breviligulata occurs on the Atlantic coast and has been planted throughout the range of Ammophila champlainensis. This more common species has a larger panicle (23-30 cm long), larger flag leaf (30-24 cm long), and flowers in late August and September.

This grass flowers in late June to early July. The flowering stalks and leaves can be seen whenever they are not covered by snow, but they are often difficult to identify to the species level unless you are intimately familar with Ammophila. Surveys should be conducted during the peak flowering period.

The time of year you would expect to find Champlain Beachgrass flowering and fruiting in New York. 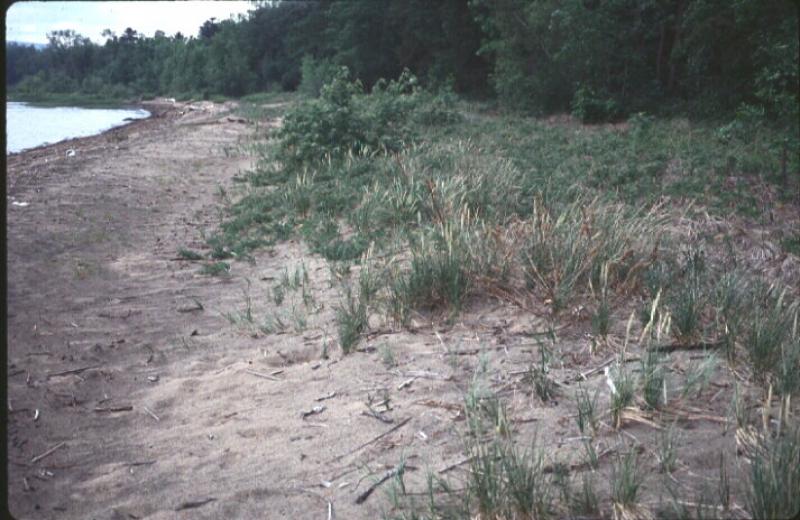 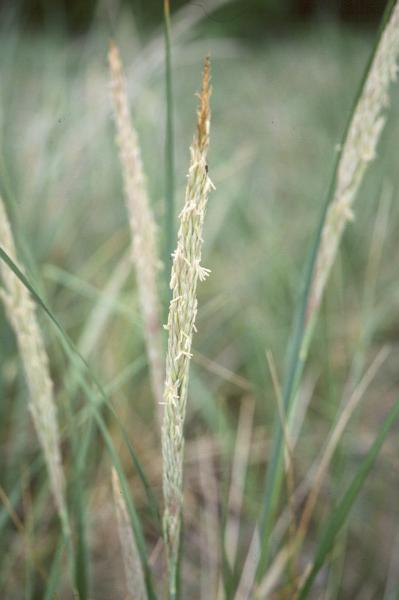 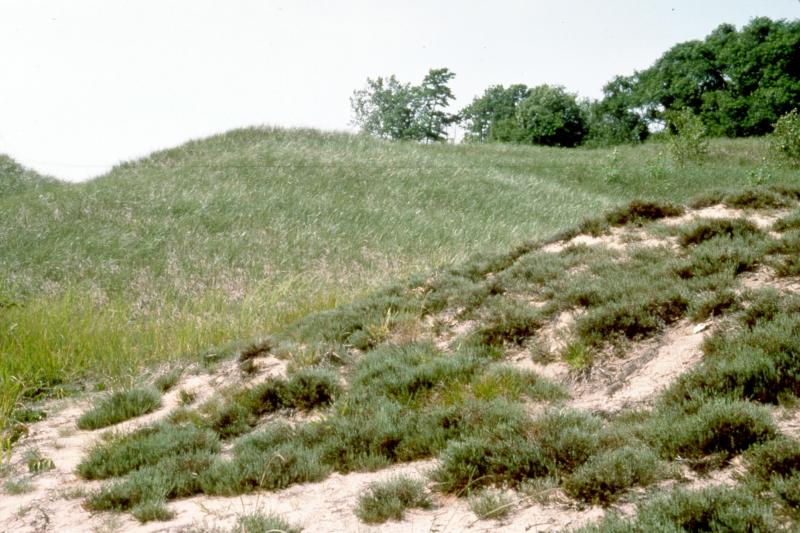 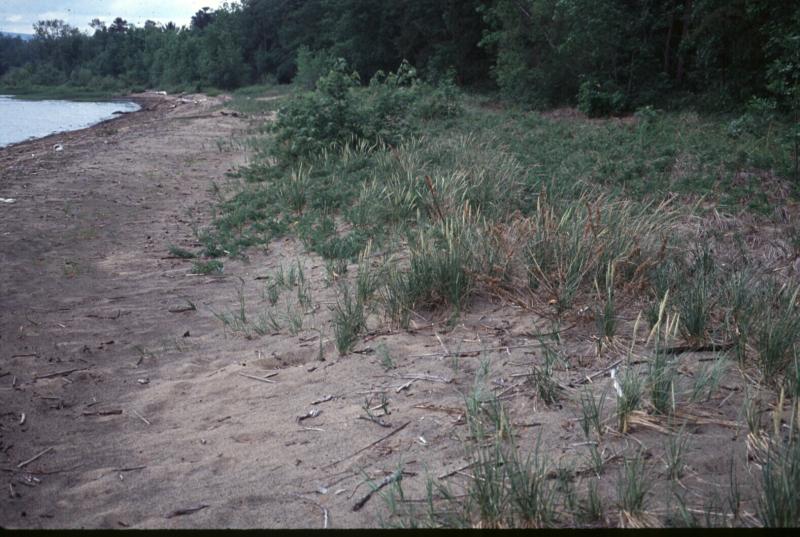 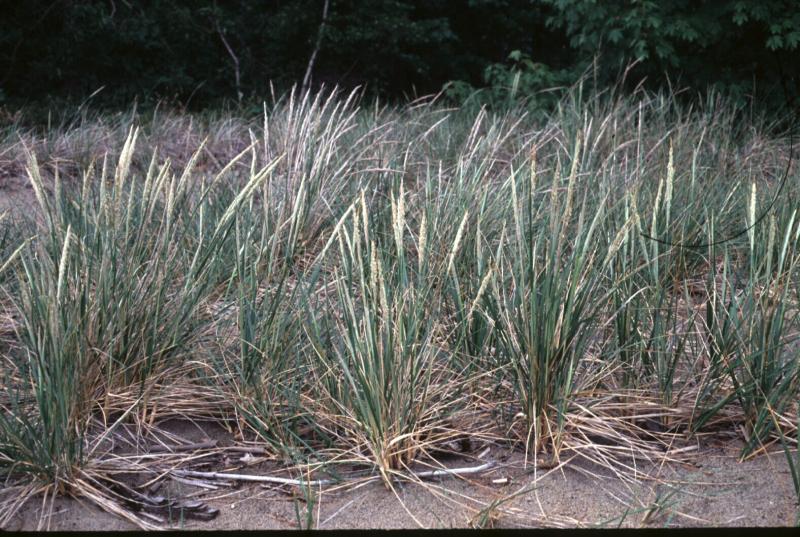 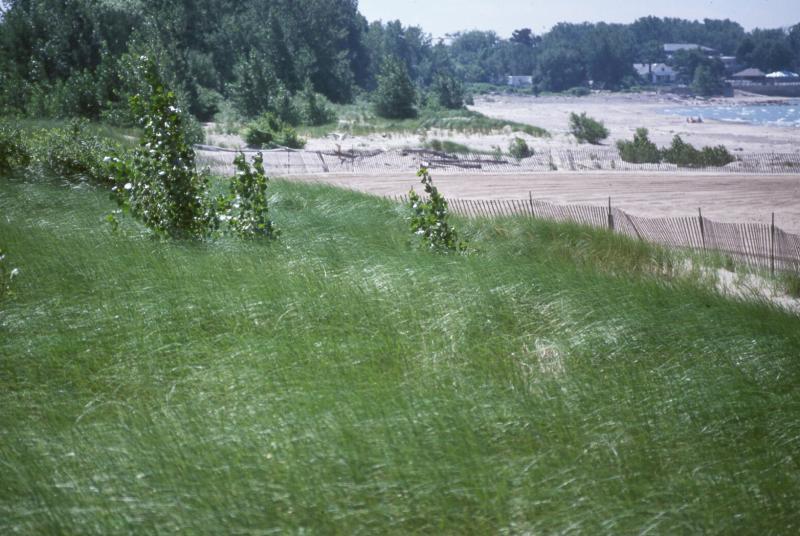 This was recently described as a subspecies instead of a full species. SIDA Vol. 22(1):496.

Walker, Peter J. 1998. Biogeography, speciation, and concerted evolution in Ammophila (Poaceae): infraspecific variation in the Internal Transcribed Spacer of Nuclear Ribosomal DNA. A thesis presented by Peter J. Walker to the faculty of the Graduate College of the University of Vermont. March 1998.