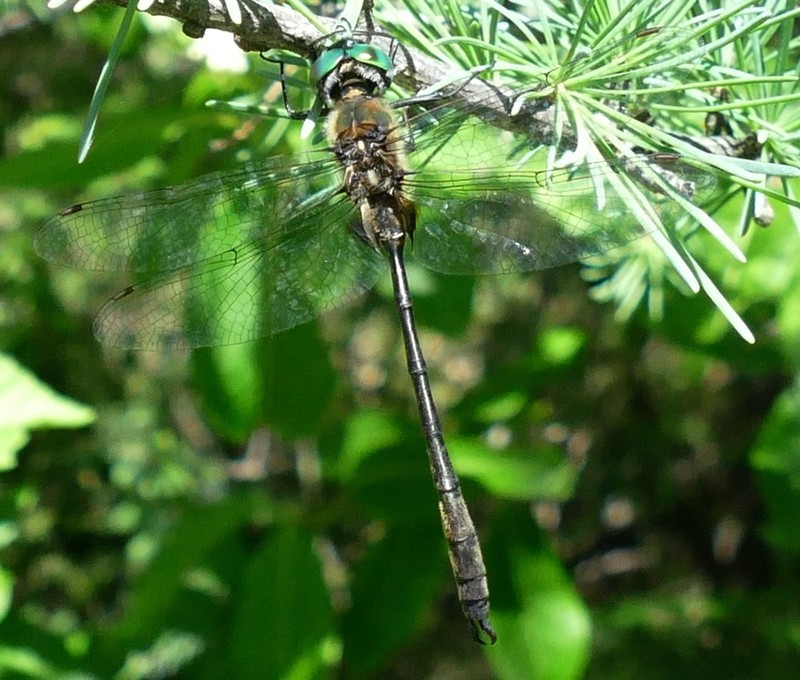 Delicate Emeralds are one of the more easily distinguishable Somatochlora in New York with a combination of short wings, very slender abdomen, and basal spot on the hind wings (Jones et. al. 2008).

In New York, Somatochlora franklini is known from five bogs in three counties in the North Country (New York Natural Heritage Program 2020). It has a small known range in the state, limited to Adirondack sphagnum bogs and bog swales where threats to habitats could include climate change and hydrologic alteration due to human activities.

White et al., (2015) found declines in county-level distributions since 2000, but slight increases since 1970 throughout the entire Northeast. In New York, this species has occupied one or two sites in Franklin County until 2010 and has been found in three additional sites in the Adirondacks with additional inventory since then. There is no information on population trends for this species at known locations, as a number of sites have only recently been documented and it was first observed in the state in 1995 (Donnelly 1999, New York Natural Heritage Program 2020).

Long-term information regarding population size is not available prior to the late 1990s (New York Natural Heritage Program 2020). Since observations are fairly recent, and the full extent and size of the populations have not been determined, long-term trends are unclear.

Any activity which might lead to water contamination or the alteration of natural hydrology could affect Delicate Emerald populations (NYS DEC 2005). Such threats may include roadway run-off, industrial pollution, the building of dams, peat mining, forestry, or development activities near their habitats. Natural succession could also threaten some sites as shallow pools fill in with vegetation over time (NYS DEC 2005). Both emergence rates and/or species ranges may shift for odonate species as a result of climate change (Corser et al. 2014).

Further research is needed to define the distribution and population size of the Delicate Emerald and inventory in Adirondack sphagnum bogs is needed. In addition, research is required to understand the habitat requirements and threats to this species, and to create appropriate management guidelines for its persistence in known locations (NYS DEC 2005).

Throughout its range, this species inhabits small spring-fed boggy streams (Walker and Corbet 1975). This species is found in sedge and moss-filled fens, at the foot of hillsides below seepage or in wide-open meadows. It is not usually encountered near open water. In New York, specific habitat characteristics include large bogs and boggy swales in the Adirondacks. S. franklini is one of a number of primarily boreal emeralds, many of which are on the rear edge of their northern ranges and limited to the coldest regions of the state.

Delicate Emeralds have been documented in three counties in northern New York: Essex, Franklin, and St. Lawrence. It has been observed at five bogs in these counties since 1995 (New York Natural Heritage Program 2020).

Delicate Emeralds have bright emerald green eyes when mature. Males have a dark thorax with metallic green iridescence and one lateral spot on the front half, fading with age. Their abdomens are brownish to black and more slender than other Somatochlora, with dull brown side spots on abdominal segments 1-2 and a dull yellow ring at the end of S2. The wings are short, clear or with a yellowish wash and a dark brown basal spot on each hindwing. The male cerci (terminal appendages) are distinctive from other Somatochlora and appear knife-like in profile and gradually taper toward the base. Females are similar to males, but have a thicker abdomen and a dull orange dorsolateral spot on S3. The genital plate is scoop-shaped and nearly as long as S9 (Jones et al. 2008, Paulson 2011).

The time of year you would expect to find Delicate Emerald present and reproducing in New York.

Abbott, J.C. 2006-2020. OdonataCentral: An online resource for the distribution and identification of Odonata. Available at :https://www.odonatacentral.org/ (Accessed: February 24, 2020).

Information for this guide was last updated on: June 23, 2020