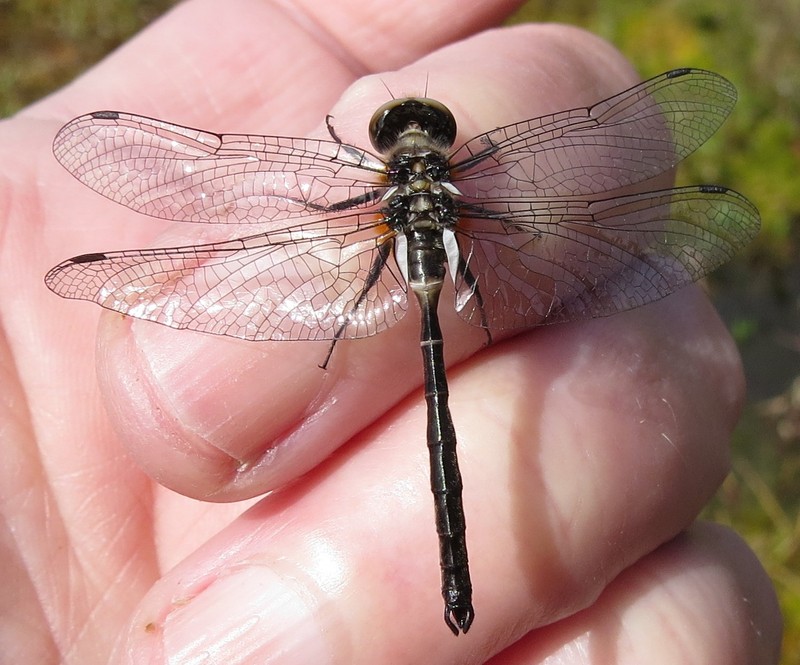 The larva of this rare and elusive glacial relict species was not described until the 1990s (Charlton and Cannings 1993; Mead 2003).

The Ebony boghaunter is seldom encountered due to its secretive nature, scarce breeding habitat, and early flight season. However, there is strong reason to believe that its range has retracted significantly northward toward the Canadian border, possibly due to warming. Populations are inherently vulnerable because they are small and widely scattered (White et al., 2010).

The range in New York appears to be retracting northward toward a small core of sites in southern Franklin County (White et al, 2010).

A historical site in Broome County (1947) has likely been extirpated because it has been thoroughly searched without success over many years (White et al., 2010). This had been the southern-most known locale in the entire range.

Because it does not appear to be a strong disperser, the threats to this species stem mostly from its confinement to small, widely scattered populations (Mead 2003). Climate warming could also serve to restrict this glacial relict species to cold climate refugia (Corser et al., 2015).

Site-specific management prescriptions would protect wide forest buffers around occupied or potential wetland mosaics, because these dragonflies mate, feed and perch on trees and on the ground in small clearings in the surrounding forest for much of the time, the females only briefly coming to water to to oviposit.

Habitat affinity is difficult to determine because the type of wetlands in which it has been located do not seem to be in limited supply. This led  Charlton (1985) and Charlton and Cannings (1993) to surmise that some distinct feature of the larval habitat is limiting. Thus, this rare species could use a thorough systematic statewide inventory. Because it has a short early flight season, is secretive, inconspicuous and occurs in small widely scattered colonies, it will likely remain under-reported, even by seasoned naturalists.

The traditional habitat description of this secretive species includes fens and acid bogs with soupy sphagnum pools surrounded by woodlands (Paulson 2011). However in New York, it seems to occupy larger wetland mosaics that can include many different types of wetland microhabitats, from open water with marshy or swampy areas, along with some presence of a fen or bog component; usually there is also running water, such as a small brook. Larvae develop in small, deep, sedge and moss-choked pools.

This is primarily a Great Lakes and Northeastern species, known from widely separated colonies from Nova Scotia west to Manitoba, south to Wisconsin, New York and Massachusetts.

This small (3.0 cm) all black emerald often has some yellow or whitish markings on the thorax and abdomen. White rings separate abdominal segments 2-4. Male eyes become brilliant green with age. The sexes are similar.

This is a very small, nearly all black emerald, with a metallic face and green eyes that often looks and behaves more like a Whiteface (Leucorrhinia).

Males are often seen perching adjacent to the wetland on the ground in small sunlit openings, such as trails. Eggs are laid exophytically (outside plant tissues) and the larvae live within saturated strands of moss.

The larvae are generalist predators, while the adults feed on small flying insects.

The flight season of this inconspicuous species is brief and early with the few New York records falling within about a month and a half, between May 11 to June 23.

The time of year you would expect to find Ebony Boghaunter reproducing and larvae present and active in New York.

Jones, C.D., A. Kingsley, P. Burke, and M. Holder. 2008. The Dragonflies and Damselflies of Algonquin Provincial Park and the surrounding area. Friends of Algonquin Park, Whitney, ON.

Information for this guide was last updated on: June 30, 2017