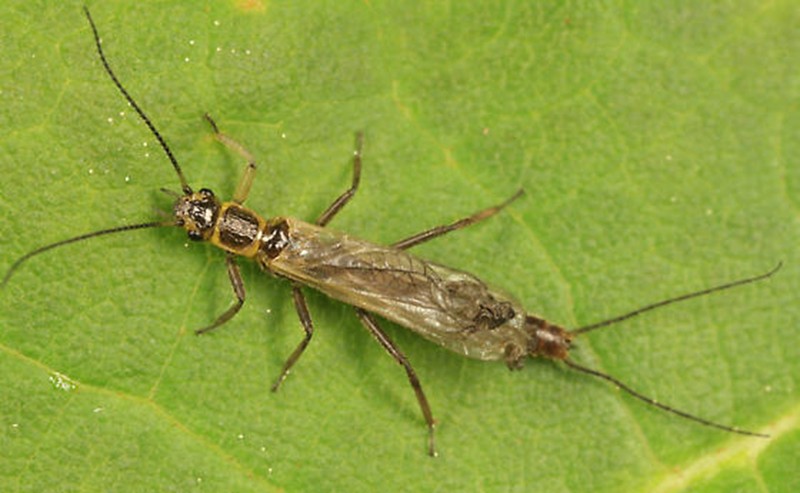 State Conservation Status Rank
SNR
Not Ranked - State conservation status not yet assessed.
Global Conservation Status Rank
G3
Vulnerable globally - At moderate risk of extinction due to rarity or other factors; typically 80 or fewer populations or locations in the world, few individuals, restricted range, few remaining acres (or miles of stream), and/or recent and widespread declines.

The Gaspe Sallfly belongs to the Green Stonefly family (Chloroperlidae). One would assume that all species within this family are green, however many are yellow and some are other colors (McCafferty 1998).

Little research has been done to assess the threats that may face Gaspe Sallfly. However, it is well understood that benthic macroinvertebrates, such as stoneflies, are often impacted by changes in their habitat quality (e.g., degradation of water quality, alterations to streamflow, and temperature). Infrastructure such as dams can increase stream temperature and alter stream flow (Zaidel et al. 2021). Likewise, deforestation or the removal of trees along stream banks can increase water temperatures and siltation (Souza et al. 2020). These changes in water quality, flow, and temperature could have an impact on Gaspe Sallfly populations.

Any measures to reduce water contamination or hydrological alteration such as agricultural run-off, shoreline development, and damming that would affect river flow should be considered when managing for this species (NYS DEC 2005). Consider reducing road salt usage in transportation corridors near streams (NYSDEC 2005). Maintaining a forested buffer around the river would be beneficial to many aquatic macroinvertebrates as it helps reduce siltation and pollution from activities such as farming, logging, and construction. Additionally, where construction is taking place near water systems, measures to reduce siltation as much as possible are recommended. This could include disturbing only the work area to maintain as much vegetation as possible to reduce runoff, working in phases to allow for more centralized control of sedimentation, using sediment traps or ditches to direct runoff away from the river or, stabilizing soil by seeding, mulching, use of blankets, or wool binders. Protect slopes by using silt fences or fiber rolls.

Further research should be conducted to better understand Gaspe Sallfly behavior and habitat needs in order to protect it from potential threats, such as the degradation of habitat.

This species is known to inhabit medium-sized streams to large rivers and has been collected in streams lined with bedrock, boulders, and large cobble (Myers et al. 2010).

This species lacks a good physical description for identification. This species is part of the family Chloroperlidae, known as the green stoneflies. Larvae within this family tend to be patternless and measure anywhere from 5-12 mm long (excluding tail), gills are typically lacking, and hindwing pads are usually parallel (McCafferty 1998). Tails are almost always shorter than the abdomen. In the adult stage, species within the family Chloroperlidae are similar to those within the Perlodidae family with the exception that the anal lobe of the hind wing is sometimes reduced or absent and "vein A2 in the forewings either forks at a point beyond the placement of the A1-A2 crossvein or does not fork at all" (McCafferty 1998).

Adults have been collected between May and mid-September suggesting that this could be the best time to see this species (Myers et al. 2010).

The time of year you would expect to find Gaspe Sallfly present and reproducing in New York.

Information for this guide was last updated on: August 9, 2022