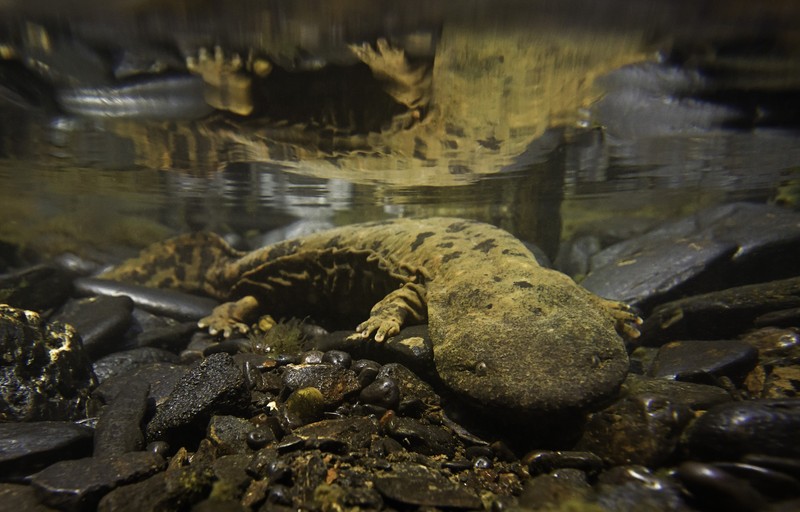 Hellbenders are the largest salamanders in the western hemisphere.

Hellbenders have a very restricted distibution in the state, and populations appear to be declining. They face many threats, especially threats that affect habitat quality.

Populations in the Allegheny River and Susquehanna drainage appear to have declined in the last 20ish years from the 1980s to 2000s (Foster et al. 2009). A study from 2004 and 2005 comparing populations sizes at eight sites in the Allegheny drainage to a study from the mid-1980s found that one of the sites no longer had hellbenders (Foster et al. 2009). Three additional sites had lower estimated population sizes than in the previous study, while three sites had greater estimated populations than were found in the 1980s. However, the ecological density decreased at all but one site between 1985 and 2005. Low numbers of adults were found in the Susquehanna River and tributaries in the 1980s; only 2 nests and no larval or juvenile hellbenders were found during these surveys (Bothner and Gottlieb 1991). Seven of 24 known populations are considered good, or between good and fair viability (NYNHP 2020), while eight populations are considered historical or without any observations within the last several surveys.

Eastern hellbenders appear to be declining long-term (NatureServe 2019). Historical data is insufficient for determining accurate long-term trends in New York because of lack of records, and many historical records are vague (Bothner and Gottlieb 1991, NYSDEC 2020). No juveniles have been reported since prior to the 1980s.

There are many threats facing eastern hellbender populations in New York. These salamanders rely on good water quality and certain habitat structures to thrive, and threats to those necessities can negatively affect them. Sedimentation in streams and pollution from sources such as road salt and agricultural runoff can diminish habitat quality (Quinn et al. 2013, NYNHP 2020, NYSDEC 2020). The damming of streams and rivers can fragment hellbender habitat or populations (Gibbs et al. 2007, NatureServe 2019, NYSDEC 2020). Hellbenders are also accidentally caught and sometimes killed by anglers (Foster et al. 2009, Gibbs et al. 2007, NYNHP 2020, NYSDEC 2020). Predation by fish, including nonnative species, may threaten the health of some populations (Foster et al. 2009, NYNHP 2020). Bodinof Jachowski (2018) found that recruitment of young age classes was higher in areas with higher levels of catchment-wide riparian forest, leading to high-density populations, while areas with lower catchment-wide riparian forest had low-density populations with lower recruitment of young. Another threat to New York populations is disease. The chytrid fungus (Batrachochytrium dendrobatidis) was first discovered in NY populations in 2009. This fungus affects the skin tissues of amphibians, and occasionally leads to poor body condition or death in hellbenders.

Protecting streams from siltation, pollution, or a reduction in stream quality will positively affect eastern hellbender populations in New York (NatureServe 2019). There are several ways to accomplish these protections. Upland buffer habitat around streams and rivers should be maintained and clearing or replacing natural vegetation along river banks should be avoided (Mitchell et al. 2006, NatureServe 2019). Upstream riparian forest may be especially important in maintaining suitable habitat (Bodinof Jachowski 2018). Additional management practices that would benefit hellbenders are to avoid alteration of the rivers and leave snags and rocks in the waterway (Mitchell et al. 2006). Additionally, non-native game fish and other exotic species should not be introduced into occupied streams.

There are several aspects of hellbender ecology for which additional research is needed. More study is needed on the distribution and life history of these salamanders, specifically demographic and behavioral studies, as well as research into minimum population sizes, mortality factors and survivorship for each age class, and how land us practices affect populations (Blais 1996, Foster et al. 2009, Quinn et al. 2013, NatureServe 2019, NYSDEC 2020). Further study into the impact of Batrachochytrium dendrobatidis and other causes of declines in hellbender populations in New York is also needed. Research on if headstarting projects result in adults recruiting to the population would also be beneficial.

Hellbenders require cold, fast-flowing rivers and large streams with little or no siltation (Gibbs et al. 2007). Hiding places, such as large rocks, undercut banks, and sometimes underwater talus piles, and submerged boards and timbers, are necessary (NYSDEC 2019, Quinn et al. 2013). Shelter rocks in a stream in New York were large and flat, with an average size of 101 x 81 cm (Blais 1996), and rocks were 46% larger at occupied sites (Quinn et al. 2013). Larvae need deep gravel beds for survival. Males excavate nests under large rocks in the streams for the females to lay their eggs in. Individuals use deep water pools and year-round fast flowing riffles as over winter sites (NYSDEC 2019)

Hellbenders occur in the Allegheny River and its tributaries in Allegany and Cattaraugus counties, as well as the Susquehanna River and tributaries in Broome, Chenango, and Delaware counties (Gibbs et al. 2007)

Hellbenders are large, brown salamanders that range from yellow brown to almost black, and may have dark, irregular blotches (Gibbs et al. 2007). Their tails are keeled and laterally compressed, and they have broad, flat heads and bodies. They have small eyes and large mouths. Folds of skin cover the sides of these salamanders from the back of the head to the base of the tail. The legs are short and stocky, with 5 toes on the hind feet and 4 toes in the front.

The large size and skin folds.

These large salamanders are fairly sedentary with small home ranges (Blais 1996, Gibbs et al. 2007). They walk along the bottom of the river at night, and use large rocks as hiding places.

Crayfish make up the largest part of their diet, as well as smaller quantities of fish, earthworms and insects (Gibbs et al. 2007).

The time of year you would expect to find Hellbender active and reproducing in New York.

Bothner, R. C., and J. A. Gottlieb. 1991. A study of the New York state populations of the hellbender, Cryptobranchus alleganiensis alleganiensis (Daudin). Proceedings of the Rochester Academy of Science 17:41–54.

Information for this guide was last updated on: March 5, 2021