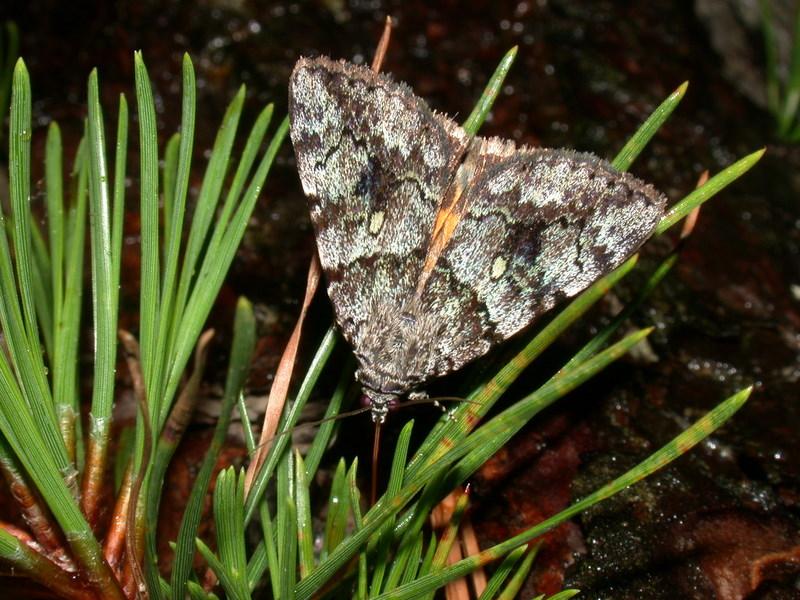 State Conservation Status Rank
S1S2
Critically Imperiled or Imperiled in New York - Especially or very vulnerable to disappearing from New York due to rarity or other factors; typically 20 or fewer populations or locations in New York, very few individuals, very restricted range, few remaining acres (or miles of stream), and/or steep declines. More information is needed to assign either S1 or S2.
Global Conservation Status Rank
G4?T4?
Apparently Secure globally (most likely) - Conservation status of both the species as a whole and the subspecies/variety is uncertain, but most likely both are uncommon in the world but not rare; usually widespread, but may be rare in some parts of its range; possibly some cause for long-term concern due to declines or other factors. More information is needed to assign a firm conservation status for both the species as a whole and for the subspecies/variety.

Within New York State, the Jersey jair underwing is known to occur only on Long Island. Currently, three populations are documented. Throughout its range, the moth is generally rare and local, having a spotty distribution and being restricted to major areas of dry oak scrub.

The short-term trend for the Jersey jair underwing in New York State indicates that the population is stable. The species is widespread in the Dwarf Pine Plains. At this site, approximately 180 individuals were captured over the course of seven survey years between 1986 and 2005, indicating that the population is viable and reproducing. The other two documented populations in the state are on protected lands.

The long-term trend for the Jersey jair underwing in New York State is unknown (New York State Department of Environmental Conservation 2005). However, it is possible that the population has undergone a substantial decline since the extent of its habitat, pitch pine-scrub oak barrens, in the state has been reduced substantially since historic times (Wagner et al. 2003).

Elimination and fragmentation of habitat by commercial and residential development is the main threat to moth and butterfly species such as the Jersey jair underwing that inhabit shrublands in southern New England and southeastern New York. Fire suppression and allowing succession may eliminate suitable habitat for the Jersey jair underwing (Wagner et al. 2003), while excessive prescribed burning and wild fires that consume entire occupied habitats are also threats (NatureServe 2010). Lights from adjacent areas such as airports can also disturb the moths.

Maintaining suitable habitat is the main management need. The natural communities that the Jersey jair underwing inhabits require periodic fire or mechanical management for their maintenance. When conducting prescribed burns, it is necessary to retain substantial unburned patches (refugia), since survival of Jersey jair underwings in burned areas is minimal. Therefore, it is ideal for occupied habitats to be subjected to infrequent partial burns (Wagner et al. 2003; NatureServe 2010). In addition, in occupied areas it would be beneficial to restrict ATV use and to minimize lighting to maintain dark sky conditions.

The Jersey jair underwing is known to occur on Long Island.

The Jersey jair underwing has a widespread range, but within that range it has a very spotty distribution and is restricted to major areas of dry oak scrub. It is known mostly from New Jersey and east Texas, but it also occurs in New York (Long Island), eastern North Carolina, the Florida panhandle, and Oklahoma. It likely occurs elsewhere in between (NatureServe 2010).

The Jersey jair underwing is a colorful moth with a wingspan of approximately 35-40 mm. Its forewings contain brown shading between the postmedial and subterminal lines, and its hind wings are yellowish orange, with black only at the border (Covell 1984). The caterpillar is pale gray with uniform gray mottling (Wagner et al. 2008).

There is one generation each year. Adults lay their eggs in bark crevices or in the leaf litter at the base of the larval foodplant, scrub oak (Quercus ilicifolia). The eggs overwinter. In the spring, larvae (caterpillars) must eat new leaves rather than older, hardened vegetation. The larvae seem to have five instars before pupating and emerging as adults. Adults have a relatively long flight season (Wagner et al. 2008), lasting from early July until early September in New York State.

The best time to see the Jersey jair underwing is during its flight season. In New York State, it has been captured flying from early July until early September.

The time of year you would expect to find Jersey Jair Underwing present and reproducing in New York.