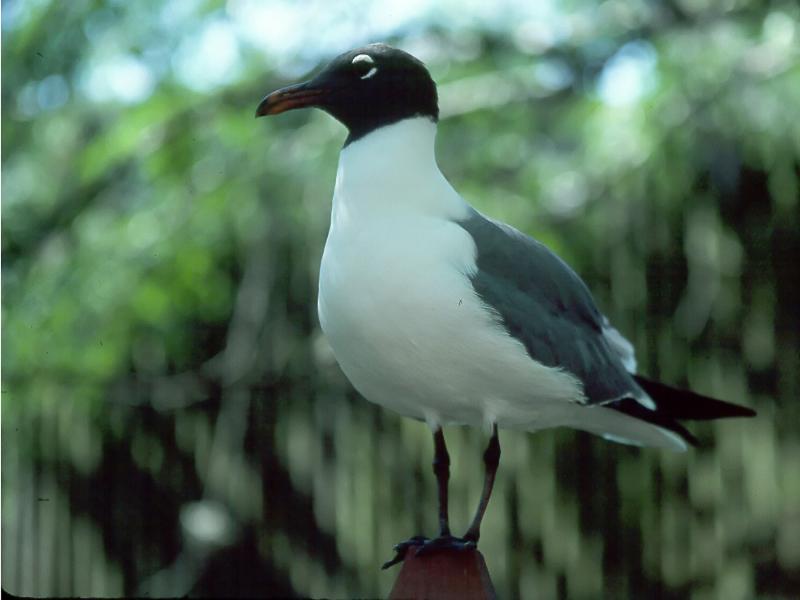 Unlike other gull species, Laughing Gulls rarely steal eggs and chicks of other birds (Burger 1996).

New York is near the northern limit of the Laughing Gull's breeding range, with breeding populations being restricted to beaches, dredge spoil islands, sandy non-barrier islands, and recently, salt marsh islands along the coast of southern Long Island (New York Natural Heritage Program 2009). Much of the former breeding habitat has been lost due to development and recreational activities along Long Island's beaches, resulting in the Laughing Gull and other beach-nesting species to nest on salt marsh islands (Burger 1996; McGowen and Corwin 2008).

Since the inception of gull control measures at John F. Kennedy airport, over 63,000 Laughing Gulls were killed or removed from areas near the airport runways between 1991 and 2003, causing a 60 percent drop in the nesting population at Jamaica Bay (McGowen and Corwin 2008). Comparing the first and second breeding bird atlas for this species is a challenge since the birds were lumped into the general gull colony category instead of counted as a stand alone species. There are currently six active sites where Laughing Gulls have been known to breed (New York Natural Heritage Program 2009). During the last three years (2001, 2004, and 2007) of Colonial bird monitoring by the New York Department of Environmental Conservation only four pairs were observed during the 2007 survey year (New York State Department of Environmental Conservation 2007).

Up until 1900, Laughing gulls were regular breeders on Long Island. Their eggs became valued for collectors and the demand for their feathers for the millenary trade decimated their populations and the bird was extirpated from New York by the start of the twentieth century (Buckley and Buckley 1978). Laughing Gulls continued to be spotted as a migrant but in 1978, a nest was discovered and once again they began breeding on Long Island. Their numbers greatly exploded and by 1990, there were over 7500 pairs nesting on the island marshes in Jamaica Bay Wildlife Refuge. The largest of the colonies nested near the end of a runway at John F. Kennedy Airport, which were a danger to aircraft, prompting the Port Authority to begin gull control measures (McGowen and Corwin 2008).

Loss of suitable nesting and foraging habitat due to development, recreation, and erosion; competition with other gull species; and gull control activities as a result of minimizing collision with aircraft, pose the greatest threats to Laughing Gulls (Burger 1996).

Work with partners to develop a salt marsh restoration plan including the removal of invasive species such as Phragmites on nesting grounds. Monitor populations and improve on survey methods (Wasilco 2006).Work with the Port Authority to identify and implement less lethal ways of gull control around John F. Kennedy Airport (Burger 1996).

In New York, Laughing Gulls are restricted to the saltmarsh islands of Jamaica Bay National Wildlife Refuge along southern Long Island. There are historical records of breeding on the Line Islands in Nassau County (New York Natural Heritage Program 2009).

Laughing Gulls can be found breeding along the Atlantic Coast from Maine to Florida, along the Gulf Coast from Florida to Mexico, and sporadically along the Gulf of California. The birds also breed on several Caribbean islands including Aruba and the islands of the Bahamas and Lesser Antilles (Burger 1996; Natureserve 2009). Nonbreeding Laughing Gulls can be spotted during the summer around the eastern Great Lakes as well as Baja California (Burger 1996). During the winter months, those that breed in the northern part of the range overwinter from North Carolina south throughout the breeding range. Florida, Mexico, and both coasts of northern South America from Peru to Columbia host the greatest concentrations of wintering Laughing Gulls (Burger 1996; Natureserve 2009).

The Laughing Gull is a medium-sized bird 40-46 cm in length with a long wingspan averaging 102 cm (Peterson 1980; National Geographic Society 1999). They are easily identified by their black head and grey back and wings that blend into their black primary wing feathers. The rest of their body parts are white, with some pink on the breast when the birds arrive at their breeding grounds, which gradually fades away. The bill is brownish with a bright red-orange tip. Legs and feet are a deep red (Burger 1996). During the Nonbreeding season, the black head of the adults changes from black to white with grayish streaks, the white underparts take on gray undertones, the dark grey back and wings become lighter (National Geographic Society 1999), and the color of the bill, legs, and feet become black (Burger 1996). Juveniles are generally brownish grey in color with the feathers of the wings, outlined in white that resembles a scale-like pattern. The tail feathers are gray and are edged in white. Hatchlings are born covered in down that is light brown in color with the underside a lighter brown. The down is mottled with brownish black spots. Eggs are smooth, oval in shape, have a mean length of 50 mm, and a mean weight of 40 g. The color varies from pale cream to olive brown with dark splotches. Laughing Gulls nest on the ground. The nests are composed of salt marsh vegetation such as reeds and grasses. The average size is about 14 cm wide, 6 cm deep, and 28 cm high (Bent 1921, Burger 1996). Laughing Gulls have a variety of calls, with the most common ones being the long call (sounding like kee-ahh, kee-ahhh), defense call (a series sounding like kakakaka), and alarm call (sounding like kuk-kuk-kuk). Head tosses often accompany these calls (Burger 1996).

The black head and lack of a white band separating the black primaries from the rest of the grey wings of the adult Laughing Gull in breeding plumage is the characteristic most useful in identifying this species.

Laughing Gulls can be easily identified when the adults are in their breeding plumage.

Laughing Gulls arrive at their breeding grounds a month before breeding, roughly mid-April. Pair bonds are formed just before arrival to the breeding colony. Territories are quickly established soon after arriving and nest construction begins with both sexes working together. The male typically gathers nest material while the female arranges it. Eggs are laid down shortly after with three eggs making up a full clutch. Incubation begins when the second egg is laid down, with both male and female taking turns incubating them. Chicks start to hatch around 23 days after the start of incubation. Hatching is asynchronous, with the first two chicks being hours apart and the third chick hatching about a day later (Bent 1921; Burger 1996). Laughing Gulls typically forage at low tide during the day, and sometimes forage during high tide at night (Bernhardt et al 2010). While foraging for flying insects, they exhibit a behavior called "hawking", meaning they take their prey on the wing (Sweet 1993).

Laughing Gulls feed on a variety of invertebrates including beetles, ants, flies, worms, spiders, and grasshoppers (Bernhardt et al 2010). On occasion, they will steal prey from the mouths of Brown Pelicans and eat the eggs of terns (Bent 1921).

In New York, Laughing Gulls begin to arrive at their breeding grounds in late March to early April and remain throughout the breeding season. Dispersal from breeding grounds begins in late summer. They begin their fall migration to their wintering grounds in October (Burger 1996). Nonbreeding Laughing Gulls have been spotted inland throughout the year near the Great Lakes and have also been observed along Long Island during the winter (Bull 1985).

The time of year you would expect to find Laughing Gull active and reproducing in New York. 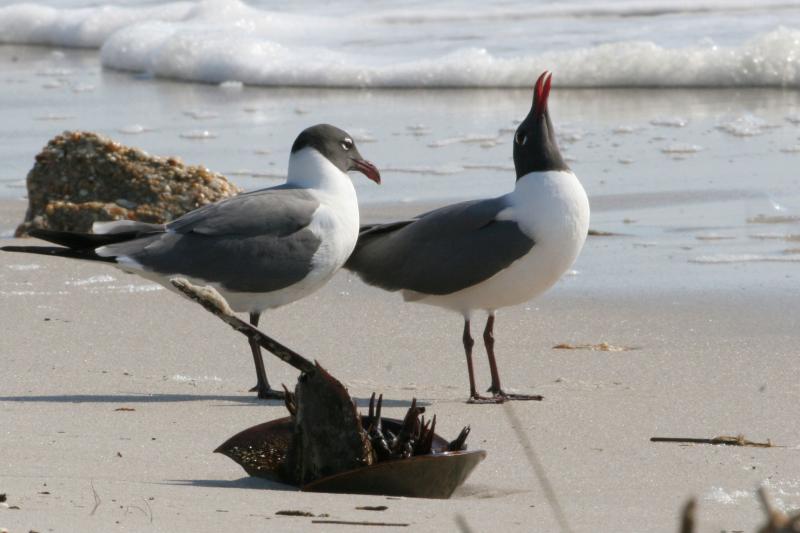