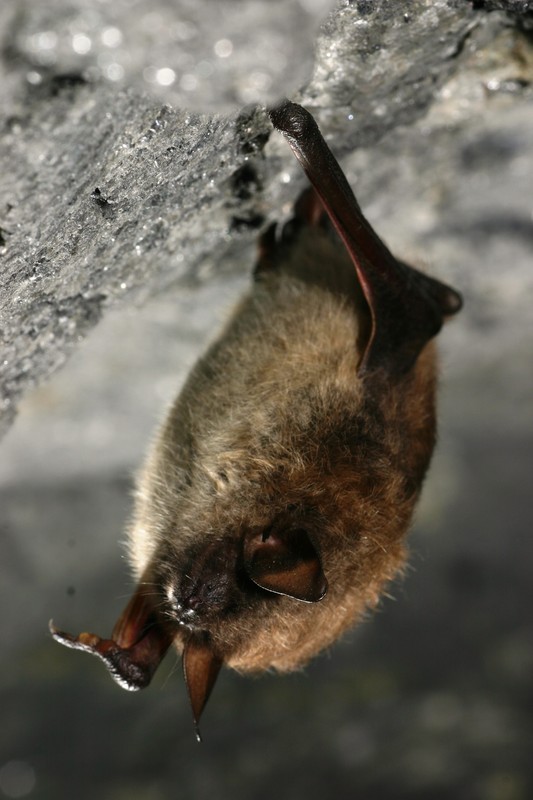 The little brown myotis has been heavily impacted by white-nose syndrome, a disease caused by a fungus that grows on their nose and wing membranes. Prior to 2006, they were the most common bat in the state but became rare throughout most of the state by 2010.

Little brown myotis was very common in New York prior to the appearance of white-nose syndrome in 2006. Only approximately 10% of the statewide numbers remain (NYSDEC 2012).

Little brown myotis populations declined approximately 84% in abundance from 2007 to 2015. There was an increase of 900 bats counted in 2012 (totaling 2,400), up from around 1,500 in 2011 during annual hibernacula surveys (NYSDEC 2012). It is not clear whether this represented an actual increase in numbers due to improved survival or fecundity or whether it was caused by movements of bats from other areas. Frick et al. (2010) predicted a 99% chance of extinction of the little brown myotis by 2026.

The long-term trends were presumed to be stable or increasing prior to the appearance of white-nose syndrome in 2006 (NYSDEC unpub. data).

The little brown myotis has suffered significant population declines throughout New York. Although the negative trend in annual survey numbers leveled off between 2011 and 2013, it is too early to say if numbers are stabilizing. White-nose syndrome is a significant and pervasive threat to the persistence of this once common species.

By far the largest threat to the little brown myotis in New York is white-nose syndrome (WNS) which was first discovered among bats in a cave in Schoharie County, New York in 2006. White-nose syndrome is caused by a fungus Pseudogymnoascus destructans (previously Geomyces destructans) that is often visible on the bats muzzle and wings (Blehert et al. 2009). The fungus may invade hair follicles and cause lesions under the skin (Blehert et al. 2009). Bats wake from hibernation and burn fat reserves that are needed to survive the winter and they become emaciated (Blehert et al. 2009). Extensive damage to their wing membranes and dehydration may also be contributing factors to mortality (U.S. Fish and Wildlife Service 2013). Survival over multiple years after exposure to WNS and healing of wing damage and infection has been documented in some individual little brown myotis at Ft. Drum, New York (Dobony et al. 2011).
Bats may be particularly sensitive to environmental toxins including those found in herbicides and pesticides. Elevated levels of persistent organic pollutants including especially PCBs, DDT, Chlordanes, and PBDEs have been found in little brown bats, in the Hudson River valley in New York (Kannan et al. 2010). The levels found in the bats were only 1 to 3 times less than lethal concentrations reported from previous studies (Kannan et al. 2010). Bats are highly susceptible to DDT residue and this chemical was widely used as a pesticide to control bat infestations in houses in the 1940s (USGS 2013). It was widely used as an agricultural pesticide in the 1950s and 60s until its agricultural use was banned in 1972. Since DDT is highly persistent (soil half-life is 2-15 years, aquatic half-life is about 150 years) (NPIC 1999), it can pose a threat to bats when there is exposure to trace residues remaining in the environment (USGS 2013). Extensive applications of insecticides and some bio control methods, such as Btk, could also pose an indirect risk to bats by reducing availability of insect prey.  Past long-term declines of the little brown myotis may be partly attributed to the use of pesticides (direct and indirect application) and to control measures targeting maternity colonies which may frequently occur in houses (Fenton and Barclay 1980).
If proper precautions are not used, cavers and researchers entering hibernacula may cause disturbance rousing bat colonies or can transport the fungus that causes WNS on their clothing (NatureServe 2013). Other potential threats may include climate change, commercial cave development, flooding and hibernacula collapse; habitat loss and fragmentation from development, hydraulic fracturing, and construction of new wind facilities; and direct mortality from wind facilities (U.S. Fish and Wildlife Service 2013).

Gating mines and caves can prevent human entry allowing the bats unobstructed access.  Following proper specifications and monitoring bat populations before and after gate installation are important, however, as gating can affect the airflow and temperature in the cave, making areas of the cave uninhabitable for certain species (U.S. Fish and Wildlife Service 2013). Buildup of debris at cave entrance gates can also have the same effect (U.S. Fish and Wildlife Service 2013).

Research is needed to document summer roost locations in New York and to determine areas of the state with the highest local abundances. Ongoing winter hibernacula surveys are needed to monitor trends of the remaining populations.

The little brown myotis uses a variety of forest types and they are somewhat of a habitat generalist. They occur in deciduous, mixed, and coniferous forest stands. At a landscape-scale in New York, they are associated with habitats that have a higher composition of wetlands and shrub cover and lower amounts of agriculture (NYNHP unpub. data). They are known to occur at elevations up to 657 m (2,155 ft) in the Adirondacks during summer (Saunders 1988).

In winter, little brown myotis hibernate in caves and mines in areas with high humidity and temperatures that are typically above freezing (Fenton and Barclay 1980). Their presence was positively related to mine entrance width and height in West Virginia (Johnson et al. 2006).

The little brown myotis appears to still occur throughout most of New York as of 2013 (NYSDEC unpublished data). However, it is unclear whether die-offs associated with white-nose syndrome may have reduced the summer distribution in some areas of the state.

The distribution of the little brown myotis is widespread in North America spanning from southern Alaska and Canada through most of the contiguous United States, though the species is generally absent from the southern Great Plains region (NatureServe 2013). Southwestern populations formerly assigned to this species have now been assigned to M. occultus (Piaggio et al. 2002; NatureServe 2013). The southwestern range boundary includes southern California (except extreme southeast), Nevada, northern Utah, northern Colorado, and perhaps northeastern New Mexico (Piaggio et al. 2002). The high density of caves in the Appalachian Mountain range and eastern Midwest (Culver et al. 1999) likely support much larger populations of this species than in other parts in the species' range (NatureServe 2013). The largest known colonies of little brown myotis are in the northeastern and mid-western United States, with the northeastern population considered the core range of the species (Kunz and Reichard 2010). Smaller populations occur in the southern and western United States (Davis and Hitchcock 1965; NatureServe 2013).

The little brown myotis has glossy fur that may range from golden brown to cinnamon brown in color and buffy to pale gray below (Fenton and Barclay 1980; Hall 1981). When pressed forward, their ears reach approximately to their nostrils and their tragus, the fleshy protuberance in the outer ear, is approximately half the height of their ear (Fenton and Barclay 1980; Hall 1981). They typically weigh 7-14 grams, with females slightly larger than males (Harvey et al. 2011).

The little brown myotis appears very similar to the Indiana bat (Myotis sodalis) but they have longer hairs on their feet that extend beyond their toes and they lack a keeled calcar, the spur of cartilage that occurs on the ankle joint (Fenton and Barclay 1980; Hall 1981:198). Northern bats (Myotis septentrionalis) have longer ears that extend beyond the nose when pressed forward, and a sharply pointed tragus, (Fenton and Barclay 1980). Little brown myotis are difficult to distinguish from other Myotis species in flight.

The little brown myotis, like most bats, breed in the late summer to early fall; they swarm and mate near the cave or mine entrance. Breeding during swarming may result in mixture of genetics among groups from different areas since bats may travel to swarm near a cave or mine that they do not select to hibernate in over the winter (Carmody et al. 1971; Fenton and Barclay 1980). Ovulation occurs in the spring which coincides with emergence from winter hibernacula. Females give birth to one young approximately 50-60 days later (Wimsatt 1945; Fenton and Barclay 1980). Young are weaned and can fly after 21-28 days (Saunders 1988).

Little brown myotis are nocturnal with periods of heightened activity at pre-dawn and dusk. They maintain large home ranges to meet their daily energy and resting needs. Mean foraging ranges were 515 ha in Mississippi (Bergeson et al. 2013). During summer, females form large maternity colonies, while males and non-reproductive females may roost individually or in small groups and may use torpor to balance energy needs (Fenton and Barclay 1980). During winter, both genders roost together in large groups.

Communications for the little brown myotis are known to include echolocations (high frequency sounds used to communicate, navigate, and locate prey), vocalizations termed "honking" that are produced prior to an aerial-collision, isolation calls by young that aid in mother-young recognition, and chemical signals produced in the nasal glands that play a primary role in communication (Saunders 1988).

Little brown myotis are short-distance migrants but they may travel several hundred kilometers between hibernacula and summer colonies (Davis and Hitchcock 1965; Griffin 1970) which is farther than for some other myotis species. In Manitoba and northwestern Ontario, migration distances ranged from 10 to 647 km (Norquay et al. 2013) and in New York and New England up to 277 km (Davis and Hitchcock 1965). Site fidelity to summer colonies and winter hibernacula is common (Norquay et al. 2013). However for individuals that do relocate between hibernacula, females may be more likely to switch sites than males (Norquay et al. 2013).

The little brown myotis is an insectivore that consumes a wide variety of insect orders. There are no known studies on their specific diet in New York, however, there are several from the eastern U.S. and they suggest regional differences in the variety and types of prey consumed. Coleoptera, Lepidoptera, and Diptera are important in the diets of little brown myotis across New England, with other groups consumed opportunistically (Moosman Jr et al. 2012). They are also known to prey heavily on the adult stages of aquatic invertebrates such as chironomids in northern parts of their range (Belwood and Fenton 1976; Anthony and Kunz 1977; Fenton and Barclay 1980). In WV, little brown bats consumed 10-22% each in descending order of importance of Lepidoptera, Diptera, Tricoptera, Coleoptera, Hymenoptera, Homoptera, and lesser amounts of Hemiptera (Carter et al. 2003). In Illinois, little browns consumed similar families, however Hymenoptera and Hemiptera were absent from their diet, and Aranea was added (Feldhamer et al. 2009).

The best time to see this species is from May through August in the early evening; however, it may be difficult to distinguish it from other Myotis species.

The time of year you would expect to find Little Brown Bat present, active, and reproducing in New York. 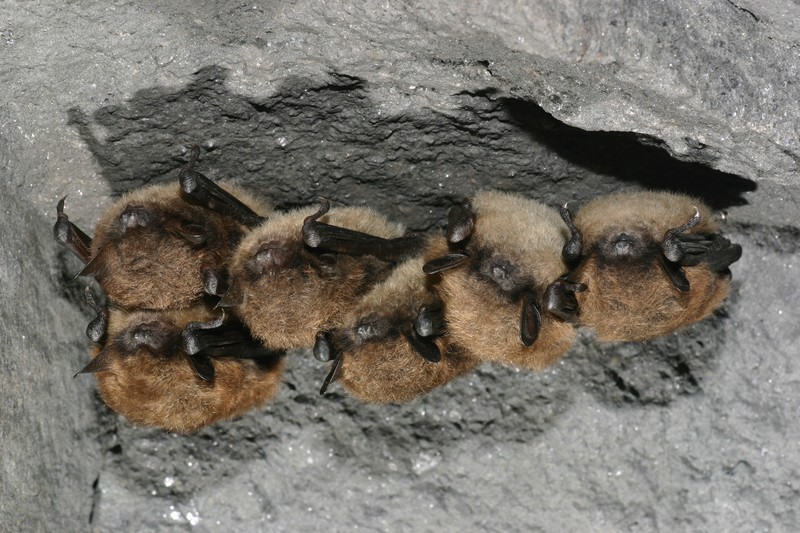 Wimsatt, W. A. 1945. Notes on breeding behavior, pregnancy, and parturition in some vespertilionid bats of the eastern United States. Journal of Mammalogy:23-33.