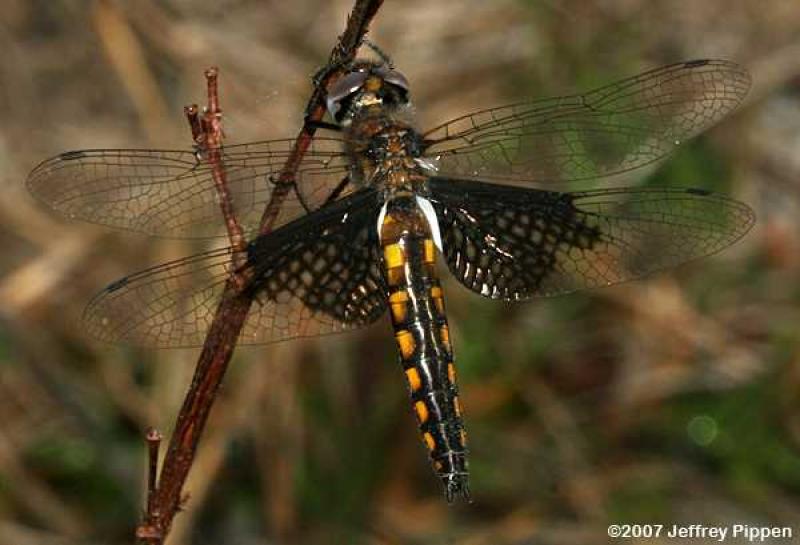 Female Baskettails use their flat and forked subgenital plates on the underside of their abdomens to carry their eggs in a "basket". They deposit the whole mass of several hundred eggs from the basket with a double dip into the water (Dunkle 2000).

A single specimen was collected from a large wetland in Lewis County in 2006. It is unknown if this represents a breeding population or a stray individual, since this is primarily a coastal species. A single specimen was collected from four different coastal plain ponds in Suffolk County in 2008 (New York Natural Heritage Program 2009). It is unclear how many breeding populations may be present on Long Island. Additional survey efforts at historical, potential, and extant locations are warranted to better understand the status of this species in New York State.

There has been no estimate of population size for this species based on statewide occurrences. Recent sightings were confirmed in Lewis county (2006) and on Long Island (2008), while the species had not been confirmed in the state prior to the mid-1950s (New York Natural Heritage Program 2009). Prior to 1973, this species was confused in the literature with Common Baskettails, and any new location information on the Mantled Baskettail in New York may be reflective of heightened interest in surveying for this species and a spread of knowledge on how to separate this species rather than a population increase or a range expansion (Dunkle 2000, Holst 2005).

Recent observations of Mantled Baskettail have been made from 2006-2008 on Long Island and in Lewis County (New York Natural Heritage Program 2009). Two historical occurrences from Long Island are known from the mid-1950s. The distribution and size of populations have not been determined in New York, and long-term trends are unclear.

Due to the aquatic life history of the Mantled Baskettail, any activity which might lead to water contamination or the alteration of natural hydrology could impact their populations (Holst 2005). Such threats might include eutrophication, changes in dissolved oxygen content, agricultural run-off and other pollutants, chemical contamination, increases in sediment load, and acidification (Holst 2005). Residential development and the resulting increase in water withdrawal may have negative impacts at the Long Island coastal plain pond sites (Virginia Brown, pers. comm.).

Additional survey efforts may be necessary before specific stewardship needs at a location can be identified. As with all recent documentations of this species in New York, the presence and size of breeding populations have not been determined. However, any measures to reduce water contamination or hydrological alteration should be considered when managing for this species (Holst 2005).

Further research is needed to define the distribution, life history, and population size and trends of the Mantled Baskettail (Holst 2005). In addition, research is required to understand the ecology of this species, including the identification of habitat preferences and threats (New York State Department of Environmental Conservation 2006).

Throughout its range, Epitheca semiaquea is known from lakes, ponds, and ditches with clear water (Dunkle 2000). In New York, this species has been documented in recent years in a dwarf shrub bog in Lewis county and four different coastal plain ponds on Long Island (New York Natural Heritage Program 2009).

The Mantled Baskettail has been confirmed from Suffolk county in 2008 on Long Island as well as a single specimen from Lewis County in 2006 (New York Natural Heritage Program 2009). It is unknown if the latter represents a breeding population or a stray individual, since this is primarily a coastal species. Additional survey efforts at historical, potential, and extant locations are warranted to better understand the status of this species in New York State.

Baskettails are in the Emerald (Corduliidae) family and have hairy, brown bodies, yellow-orange abdominal side spots and are less metallic looking than most emeralds (Dunkle 2000, Mead 2003). Mantled Baskettails were often confused with Common Baskettails (Epitheca cynosura) prior to 1973 because they are so similar in appearance (Dunkle 2000). In the southern United States, the Mantled Baskettail has brown on the basal half of the hind wing where the brown spot reaches the nodus and the rear edge of the wing (Dunkle 2000). However, from north New Jersey, New York, and Massachusetts to Nova Scotia, the Mantled is less easily distinguished from the Common Baskettail, as the Mantled have reduced or absent wing markings (T. Donnelly, pers. comm.). The Mantled also have shorter and thicker abdomens, with a gentle tapering from front to rear when compared with Common Baskettails (T. Donnelly, pers. comm.). Both sexes of the Mantled Baskettail tend to appear slightly convex marginally at abdominal segment 3, while there is a distinct constriction in this location in male Common Baskettails (Needham et al. 2000). The male terminal appendages of the two species can be distinguished in populations south of New Jersey; however, this difference has not been consistent in northern populations like New York (Needham et al. 2000).

Adult Mantled Baskettails forage for food in clearings with a rapid and bouncy flight, and adult males are known to patrol their territories either in the shade or at dusk (Dunkle 2000).

Both larvae and adults of Mantled Baskettails are predators and feed on smaller invertebrates.

In recent years, Mantled Baskettail adults have been observed in New York from late May through mid- July (New York Natural Heritage Program 2009). Further searching may reveal earlier appearance, as they have been documented in New Jersey in mid-April (Dunkle 2000).

The time of year you would expect to find Mantled Baskettail present and reproducing in New York.

Donnelly, Nick. 2009. E-mail to Erin White of January 30, 2009 regarding Epitheca semiaquea and Epitheca cynosura and specimens.

Information for this guide was last updated on: March 18, 2009