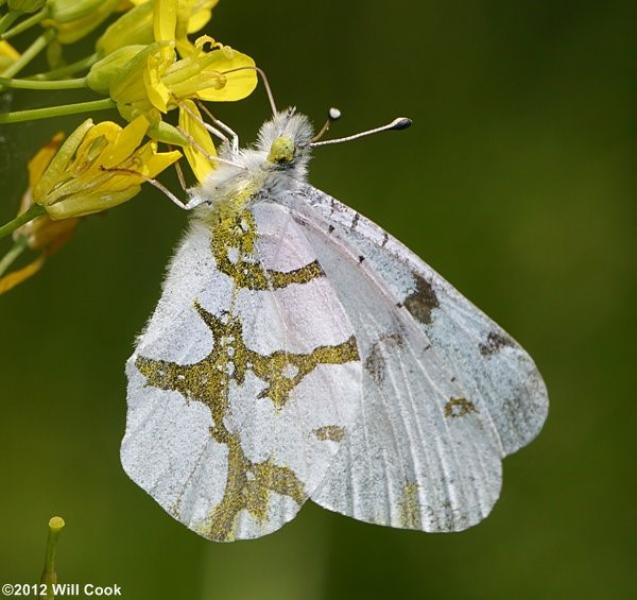 Alvar pavement grasslands, the community type the Olympia marble inhabits in New York, is limited to only one county in the state (Jefferson County).

This specialist butterfly is confined to a small fraction of the state where its particular Alvar grassland habitat is found.

The short-term trend for the species in New York State seems to be stable. It has been reported from two protected sites in Jefferson County. One had sightings until 2005 with no surveys since 2006, and surveys at the other site have recorded an extant population through 2016.

The long-term trends are unknown. This species was first discovered in New York in 1986, and surveys from 1986 to 2016 indicate the species was extant during that time. No surveys have been completed at one of the two known sites since 2006.

One of the main threats to the Olympia marble is pesticide use to control spongy moths. Most Lepidoptera are negatively impacted by the chemicals used in spongy moth sprays, and the use of these chemicals could cause a decline in Olympia Marble populations in New York (Butler et al. 1995, Parshall 2002). Populations can also be threatened by prescribed fire and herbicides to maintain habitat openings. Hot prescribed burns can be lethal to individuals, and herbicides can destroy host plants needed by larvae. Habitat destruction is a potential threat in areas that are not already protected. Additionally, the habitat needed for this species is threatened by invasive plant species.

This species is sensitive to chemical spraying (e.g. herbicides, insecticides), and so broadcast use of chemicals in their habitat should be avoided. Managers should also avoid hot burns within inhabited areas, since populations can be impacted by prescribed fire (Butler et al. 1995, Parshall 2002). If an area occupied by the moth must be burned, some areas should be left unburned as refugia for the moth. Sites should be managed to promote growth of larval host plants (Arabis sp.).

One of the most important research needs for this species is more current and complete data regarding species status and distribution. Olympia marble populations would benefit from statewide survey and monitoring efforts in suitable habitat. Other research needs include the amount of area populations need for survival, as well as the density of food plants and nectar sources at known sites (Parshall 2002). Additional information regarding suitable management practices, such as invasive species removal and prescribed fire, is also needed

Populations of Olympia marble have been documented at two sites in Jefferson County.

Olympia marbles are widespread and can be found throughout western North America between the Rockies and the Mississippi, and extend from the Great Lakes region in southern Canada and south into Texas. The species also occurs in disjunct populations in the Appalachians from extreme southern Pennsylvania south to Kentucky, with populations in western Maryland, Virginia, and northeastern West Virginia. Small populations also exist in New York and North Carolina (NatureServe 2017).

Olympia marble adults are mostly white with open, simplified yellow-green marbling on the underside of the hindwing, and a black bar in the forewing. The caterpillar is mostly gray-green, with yellow subdorsal stripes.

Olympia marble adults are mostly white with open, simplified yellow-green marbling on the underside of the hindwing, and a black bar in the forewing cell (Opler and Malikul 1992). Males have a forewing width of 1.5-2.1 cm, and females have a forewing width of 1.6-2.3 cm (Opler and Krizek 1984). Living Olympia marbles have a ventral hindwing with a pink-tinged band along the costal margin (Opler and Krizek 1984). The caterpillar is mostly gray-green, with yellow subdorsal stripes (Opler and Malikul 1992). Caterpillars also have sublateral white stripes bordered by yellow beneath them.

The marbling on the underside of the hindwing is usually the most visible and easily identifiable characteristic for this species.

Flight is steady, direct and close to the ground. Males tend to fly along ridges and hilltops (Opler and Krizek 1984, Opler and Malikul 1992).

Olympia Marbles have one brood per year, and they overwinter as pupa (Holmes et al. 1991, Parshall 2002). Adults emerge in May and are active through June. The female lays single eggs on flower buds and leaves of the host plant in May or June, where the eggs remain until hatching approximately seven days later. Larvae feed on the host plant’s flower buds, flowers, seedpods, and sometimes leaves, until forming a chrysalis, usually occurring in June.

The time of year you would expect to find Olympia Marble reproducing, larvae present and active, eggs present outside adult, and pupae or prepupae present in New York. 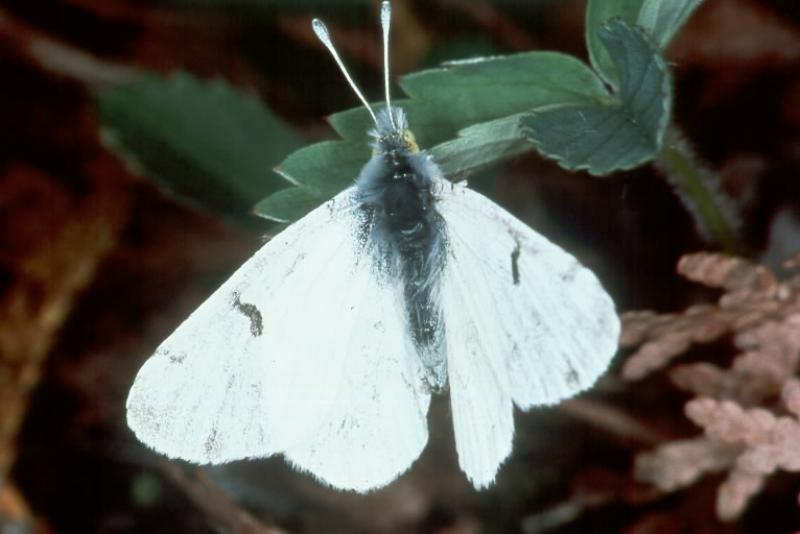 Stanton, E.J. 1997. Inventory of the macrolepidoptera on alvars of Jefferson County, New York.