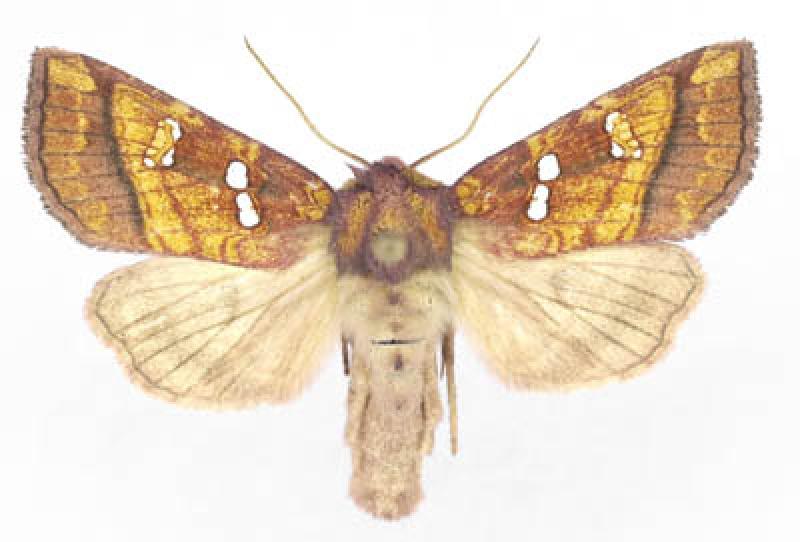 The Ostrich Fern Borer Moth uses the ostrich fern as its only foodplant. This is known as monophagous. The larvae bore into the lower stems and roots of the fern.

Three locations of this species have been documented in New York, with only one of these recently verified. Although the foodplant is fairly common and the species is likely to be more widespread in eastern New York, there is no basis to predict how widespread this moth actually is.

There has probably been some habitat loss, but the original range and abundance are unknown.

Potential threats include habitat loss, artificial lighting, and insecticide use (Schweitzer et al. 2011, Nelson 2012). Anything that kills or stunts the larval foodplant, ostrich fern (Matteuccia struthiopteris), is a threat. Elimination and fragmentation of habitat by commercial and residential development may be the most significant threat. In addition, hydrological alterations in occupied wetlands could destroy the ferns. Herbicide use along transportation and utility corridors could damage the larval foodplant in nearby occupied wetlands. The spread of invasive plants may also be a threat. Artificial lighting can: increase predation risk, disrupt behaviors such as feeding, flight, and reproduction, and interfere with dispersal between habitat patches. In addition, many individuals die near the light source. It is not known if the impact of artificial lighting is severe, but the impact is likely greater for small, isolated populations (Schweitzer et al. 2011). The use of insecticides and biocontrols can also eliminate or greatly impact many non-target species populations (Schweitzer et al. 2011, Nelson 2012).

Occupied wetlands should be evaluated to minimize encroachment and fragmentation by development. This is because 1) several species in the genus Papaipema tend to not occupy small habitat patches and 2) surrounding natural areas serve as buffers that reduce the impact of sediments, nutrients, and pollutants entering wetlands in stormwater runoff (NatureServe 2010). A general recommendation for species in the genus Papaipema is that five to ten hectares of habitat should be conserved at a site in order to safeguard a population against assumed events, human disturbance, or intense localized predation in some places in some years, which tends to vary from season to season (NatureServe 2010). In occupied areas, the following practices would be beneficial: 1) maintaining the natural hydrology, 2) restricting herbicide and insecticide spraying, and 3) conducting forestry practices, and transportation and utility corridor maintenance practices, in a way that minimizes negative impacts to occupied wetlands. In areas where artificial lighting is necessary, using sodium lights or other low ultraviolet lamps would be beneficial (Schweitzer et al. 2011). Controlling invasive plants that threaten ostrich fern would be beneficial. Monitoring deer herbivory in upland habitats may also be beneficial. Although deer generally do not severely impact ferns, they sometimes do eat the young fronds in May. If they eat a lot of the fronds in the spring, they might be significant predators on young larvae.

While this species is likely to be most characteristic of floodplain forests, the adults and larvae can turn up in any forested or edge habitat in which ostrich fern is widespread or at least locally abundant. In New York, the Ostrich Fern Borer and the Bracken Borer (P. pterisii) will seldom or never occur together, but they occur together in parts of Vermont.

The range in New York includes Albany, Rensselaer, and Columbia counties, but it is likely to be more widespread in eastern New York, probably in most drainages with an abundance of ostrich fern (Matteuccia struthiopteris). This species is not known to occur much farther west.

This species is known mostly in a narrow band from the Ottawa area south through Vermont where it is widespread. It is less common in western Massachusetts, New York, and Connecticut (NatureServe 2021). There is a single collection from Tioga County, Pennsylvania (B. Leppo, personal communication, October 8, 2020). It has also been reported from southern Wisconsin (NatureServe 2021).

The Ostrich Fern Borer has not been formally described in scientific literature. Its appearance is similar to Bracken Fern Borer (Papaipema pterisii). The adults are generally larger and more richly colored than P. pterisii, and are often still fresh in late September to mid-October. The Natural Heritage and Endangered Species Program in Massachusetts (Nelson 2012) provided a description: Ostrich Fern Borer have orange-yellow forewings that darken to a brownish-orange (sometimes with pink) toward the outer wing margins. Some individuals are a darker brownish-orange and others are a lighter/more faded yellowish-orange. There is a large white spot on the forewings (reniform spot) with an orange center. The orbitcular spot is also white and there are two white spots below it. The hind wings are a pinkish-tan. The wingspan is 32-36 mm.
Pupa are found in the soil near the root of ostrich fern (Wagner et al. 2011). Larva length reaches 35 mm. The head and prothorax are orange/brown and the body is cream color with small black spots and spiracles (Nelson 2012). Larvae are typically found at the base of the frond (Wagner et al. 2011).

The adults must be identified from an actual specimen, not from a field photograph. Some worn adults might not be identifiable, but a series of two or three specimens would aid in the identification. The adults are more richly colored, particularly the brown areas are darker, than almost all specimens of the Bracken Borer (Papaipema pterisii). Most adults of the Ostrich Fern Borer are also larger, compared to the Bracken Borer (Papaipema pterisii) and bracken fern will often be absent, which would also likely rule out the Bracken Borer. The collection date could also be a clue, as this species could still be fresh in late September when the Bracken Borer have become quite worn, or in October when the Bracken Borer would be unlikely at all. The larvae should be reared to adults to be sure, but should be separable from the Sensitive Fern Borer Moth (Papaipema inquaesita) by the lack of extensive pink on the thorax and from Sthenopis auratus (McCabe and Wagner 1989) by the much more prominent brown tubercles and much better developed prolegs. Also S. auratus larvae would probably be much smaller than Papaipema larvae in late summer, since the Hepialid larvae mature in June. S. auratus larvae also line their burrow with silk.

Either adults or larvae could be identified, but expert review is advised.

The adults are nocturnal, come readily to blacklights, and most likely appear a couple of hours after sunset.

The larva bore in the lower stems and later roots of the ostrich fern (Matteuccia struthiopteris) and use no other plants. The adults probably feed very little, if at all.

The adults emerge mostly after the Bracken Borer (P. pterisii) and some Ostrich Fern Borers will be fresh as late as mid-October. Several specimens of this species were collected in Columbia County on September 30, 1989. They probably emerge earliest northward. In general, adults should be looked for from about mid or late September to mid-October, but a few emerge earlier, possibly even in late August, but this would be rare. It is not known when the eggs hatch. Fully fed larvae usually remain dormant for a few weeks before pupating.

The time of year you would expect to find Ostrich Fern Borer Moth reproducing, larvae present and active, eggs present outside adult, and pupae or prepupae present in New York.

While this species has been known to be distinct since the 1950s, it still has never been formally described. It is listed by Grehan et al. (1995) for Vermont, and listed and briefly discussed and illustrated by Handfield (1999) for Canada.

Information for this guide was last updated on: June 30, 2021