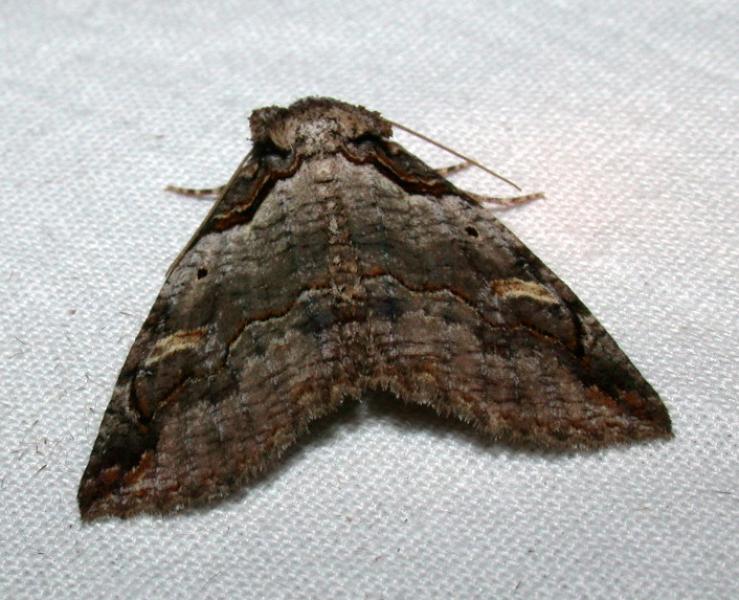 The word "zale" is Greek for wave. The person who originally named this genus, Hubner in 1818, thought the pattern on the wings of this moth resembled waves.

This species appears to be stable on Long Island. Surveys conducted since 1989 have indicated little change in the population, with the exception of the 2005 survey, which showed a dramatic increase in numbers of moths found. It is unclear what caused this sudden increase, but forest fires in the dwarf pine plains may have resulted in an increase in habitat for this species.

Known threats include habitat loss due to development and fire suppression, although the threat of development for the remaining habitat on Long Island may be low. The suppression of fires in barrens and other dry places would cause a loss of habitat for the species and therefore a drop in population size. This species requires open woodland or barrens with pitch pine and scrub oaks. Forest fires are needed, on average, every 5-10 years (Jordan et al. 2003) to maintain this type of habitat. Lack of fires will result in the succession of this community to a closed-canopy forest of tall oaks and other hardwoods (Jordan et al. 2003, Little 1979). Conversely, a fire affecting an entire occurrence could eliminate all life stages that are present.

The best management strategy for this species is the management of the natural community or habitat where it occurs. Maintaining the Long Island pine barrens with their full suite of plant and animal species requires frequent (every few decades) disturbance to maintain open-canopy, shrub-dominated communities and to prevent succession to a closed-canopy hardwood forest (Jordan et al. 2003). Researchers have determined that "an active fire management program utilizing prescribed fire with appropriate mechanical treatments" is the preferred method (Jordan et al. 2003). Researchers have also determined that the size, type, intensity, and timing of fires (pyrodiversity) needs to be evaluated for each site to maximize benefits to the natural community and the species it supports (Jordan et al. 2003). The entire occupied habitat for a population should not be burned in a single year. For example, in places where prescribed burning is used, refugia (unburned areas) are needed for many species to ensure that any life stage can survive a fire. In addition, minimizing lighting to maintain dark sky conditions would be beneficial.

The response of this species to management practices such as controlled burns and mechanical removal of vegetation should be evaluated.

This moth species requires extensive scrub oak barrens. In New York, it inhabits a pitch pine-scrub oak barrens, and the edge between a maritime heathland and maritime dunes and/or sea level fen.

This species is restricted to Long Island, where it is currently documented from two sites in Suffolk County.

The pine barrens zale occurs at a few high-quality, large (almost all more than 1,000 hectares) barrens sites per state in Maine, New Hampshire, Massachusetts, New York (Long Island), and Pennsylvania. The species is somewhat more widespread in the core of the New Jersey Pine Barrens. It also occurs at one site in the Virginia mountains. Apparently identical specimens have been examined from Florida, although the species has not been found in any collections examined from the Carolinas or Georgia.

The pine barrens zale is a gray moth that is difficult to identify. It must be confirmed by an expert in moth identification. Its forewings are mottled with dark and pale grays, with brownish-black areas at the base and tip. Each forewing contains a thick, brown line on the inner portion of the wing; a thin, wavy line on the outer portion of the wing; a long, thin, yellowish-brown, reniform spot; and a small black spot. The hind wings have dark and pale gray bands. The wingspan is 30-34 mm.

Moth size, and forewing shape and markings are the most useful characters for identification (Schmidt 2010).

The adult is the best life stage for identification. The larvae look similar to those of some other species in the genus.

Adults and larvae (at least later larval stages) are nocturnal. Larvae hide at the base of their foodplants, scrubby oaks, or in nearby litter during the day. In New York, adults fly from mid-May until mid-June. Eggs hatch less than two weeks after they are laid. Larvae occur in spring and pupate in summer. Pupae overwinter, and adult moths emerge in May.

Larvae eat new growth of scrubby oaks. The diet of adults is unknown.

In New York, the best time to see pine barrens zale is during their flight season, from mid-May until mid-June.

The time of year you would expect to find Pine Barrens Zale reproducing, larvae present and active, and pupae or prepupae present in New York.

This species is illustrated in Field Guide to the Moths (as Zale lunifera). Compare this figure to Holland's (1903) illustration of the actual Z. lunifera (XXXVII:17) (NatureServe 2010). Alternatively, Schmidt (2010) believes that Z. intenta (Walker), stat. rev., is the species formerly called Z. lunifera and that Z. lunifera is the species sometimes referred to as Z. sp. 1 nr. lunifera.