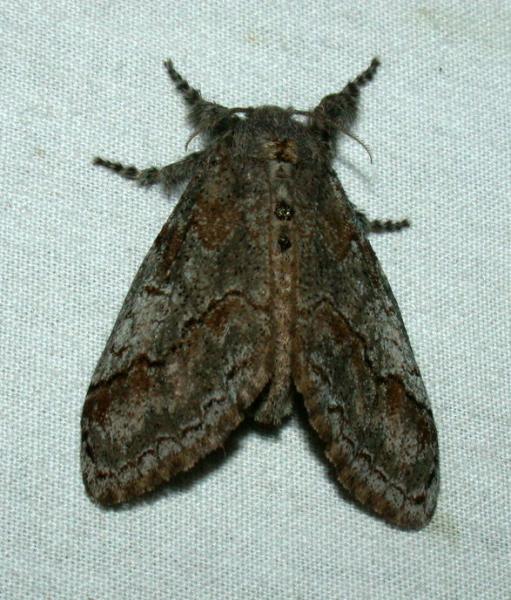 Currently, in New York State, the Pine Tussock Moth is known from only one location- the dwarf pine plains on Long Island. This species feeds on the foliage of pitch pine, which is the dominant tree species in that area.

This species appears to be relatively stable over the past decade. The presence of this species over multiple years at the dwarf pine plains site on Long Island indicates that the population is viable and reproducing. There was a significant increase in population numbers in 2005 in areas that were unburned by the large forest fire of 1995. This species requires pitch pine forests or woodlands rather than pitch pine-scrub oak barrens that dominate a landscape after an intense fire such as the forest fire in 1995.

The long-term trend for this species is tied to the long-term trend of the natural community it lives in. The acreage of dwarf pine plains in New York has declined from development, although there is still a large occurrence of this habitat type on Long Island.

Known threats include habitat loss due to development and fire suppression, although the threat of development for the remaining habitat on Long Island may be low. The suppression of fires in pitch pine forests and woodlands would cause a loss of habitat for the species and therefore a reduction in population size. This species requires pine forests or woodlands to exist. Forest fires are needed to maintain this type of habitat on Long Island. To maintain a pitch pine type forest, moderate intensity fires (not high intensity fires) are needed, on average, every 10-20 years (Jordan et al. 2003). Lack of forest fires will result in the succession of this community to a closed-canopy forest of tall oaks and other hardwoods (Little 1979, Jordan et al. 2003). Conversely, a fire affecting an entire occurrence could eliminate all life stages that are present.

The best management strategy for this species is the management of the natural community, or habitat, where this species occurs. Maintaining the Long Island pine barrens with their full suite of plant and animal species requires frequent (every few decades) disturbance to maintain the pitch pine-oak forest and to prevent succession to a closed-canopy hardwood forest (Jordan et al. 2003). Researchers have determined that "an active fire management program utilizing prescribed fire with appropriate mechanical treatments" is the preferred method (Jordan et al. 2003). Researchers have also determined that the size, type, intensity, and timing of fires (pyrodiversity) needs to be evaluated for each site to maximize benefits to the natural community and the species it supports (Jordan et al. 2003). The pitch pine-oak forest community, where this moth occurs, requires moderate intensity fires. The entire occupied habitat for a population should not be burned in a single year. For example, in places where prescribed burning is used, refugia (unburned areas) are needed for many species to ensure that any life stage can survive a fire.

Additional surveys are needed with blacklight traps to determine the extent of the dwarf pine plains occurrence on Long Island and locate additional occurrences. In addition, research is needed on the response of this species to prescribed (controlled) burning and mechanical treatment to improve habitat.

In New York State, the Pine Tussock Moth is only found in the pitch pine woodlands and barrens of Long Island.

This species is confined to Long Island and its vicinity (Schweitzer 1998).

Data on the global distribution of the Pine Tussock Moth is not well documented. It is known from Massachusetts, New York, Virginia, and Ontario (NatureServe 2010). Although it is rare in New York, it is considered a pest species in Minnesota, where it is responsible for the defoliation of jack pine forests (H. McGuinness, personal communication).

This species can be identified from a specimen or a good image. Moths are dark gray-brown with thin black lines on the veins. The larvae are gray-brown as well with four tufts of grayish hairs on the back.

The larvae of this species feed exclusively on pine foliage.

The adult moths of this species are active throughout the summer in pitch pine woodlands and barrens.

The time of year you would expect to find Pine Tussock Moth present and reproducing in New York. 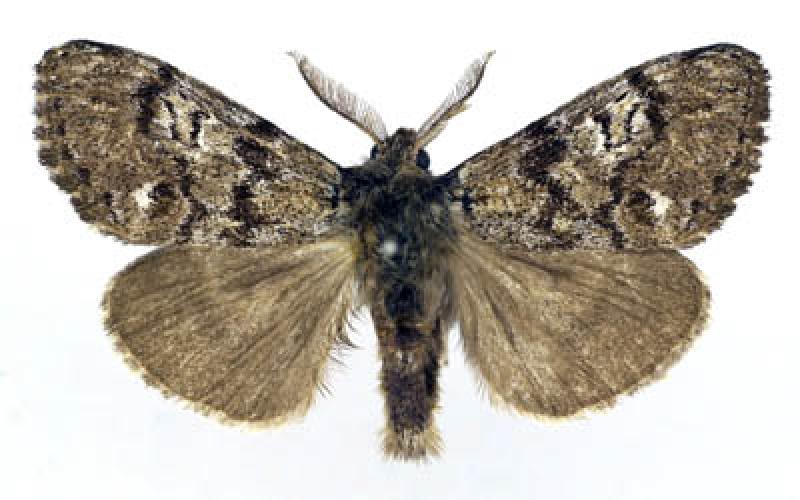 Forbes (1948) lumps this species in with Dasychira pini.

Information for this guide was last updated on: December 21, 2011