The color of the pink sallow matches the fall foliage of blueberry and other heath shrubs upon which it commonly rests.

Within New York State, three populations of the pink sallow are known to occur on Long Island. The species is probably more widespread on Long Island, but it may no longer occur elsewhere in New York.

The three documented populations on Long Island are more or less protected. Aside from fluctuations due to fire or lack of fire, the abundance of the species has probably not changed significantly in recent decades.

There is much uncertainty about the original extent of the range of the pink sallow in New York State, but the species may no longer occur in the mainland. The origin of the Poughkeepsie specimen is unknown, and it is not known whether any populations occur now in that area. Like much of the barrens fauna, the species no longer occurs at Albany. It might have disappeared from the Albany area before 1900.

Threats include destruction of habitat due to development, loss of habitat due to natural succession if fires are prevented in fire-maintained habitats, and complete burns of occupied habitats during seasons when vulnerable life stages (e.g., eggs, larvae, or adults) exist above ground and would be obliterated by a complete burn (i.e., from October through June, and perhaps longer northward). Some suitable habitats can persist for 50 years or more without fires, but others (such as the formerly occupied habitats at Albany) would probably become unsuitable within 30 years or less without fires.

Maintaining suitable habitat is the main management need. The best time for fires in fire-maintained habitats is when the pink sallow exists as prepupal larvae underground, from July- August. Entire habitats should not be burned at once. Habitats should be burned in patches, always with some unburned areas left as refugia for the species (Wagner et al. 2003).

Research is needed to better understand the habitat needs of the pink sallow and the impact of fire on the species.

Typical habitats are large pine barrens, including dwarf pine areas, on sandy or acidic rocky substrates. In other states, populations can occur in scrub oak thickets with little or no pine. These habitats can include airport approach zones. An abundance of low heaths such as blueberries seems to be the most consistent feature. The pine canopy is typically sparse (less than 50%). Most habitats rangewide appear to be more than 1000 acres, and the species is absent from many pine barrens that appear to provide suitable habitat. Moths captured in other habitats are generally strays, and several strays have been documented from places in adjacent states with several to many trap years of effort.

The pink sallow is fairly widespread on Long Island. There is a 1966 specimen from Poughkeepsie (North Carolina State University). The species was collected from the Albany Pine Bush in 1881 (specimen verified by Tim McCabe), but it was not confirmed from the Albany Pine Bush in the 20th century, and it no longer occurs there. The species may occur in the Shawangunks, and it is possible it occurs in far northern New York.

The pink sallow has a very spotty range. It originally occurred from southern Maine west very spottily through southern Quebec and Ontario to Michigan and northern Wisconsin, south in the eastern part of its range into northeastern Pennsylvania (extant, 1990s) and southern New Jersey (mainly in the core of the Pine Barrens). It is no longer found in Maine and the mainland of New York, and it may not occur in Connecticut or Rhode Island. Its status is unclear in Quebec and Ontario. There are no records from Vermont, Ohio, Indiana, or Illinois. There was one known population in western Pennsylvania, which may still exist. Populations are most concentrated in extensive sandy barrens areas of central Wisconsin, northern Michigan, northeastern Pennsylvania, coastal Massachusetts, and southern New Jersey.

The pink sallow is a moderately large moth, with a wingspan of approximately 38-45 mm. It usually has bright pink forewings and almost white hind wings. The antennae of males are pectinate (feathery). The species is usually unmistakable. See the illustrations in Rockburne and LaFonatinae (1976) and Handfield (1999). Many individuals are brighter, and some are duller. A few have the pink greatly reduced and are then a dull dark olive color. Even so, there is probably always some pink, and the white hind wings and male antennae should be distinctive. The larvae are reddish brown with no obvious pattern. They are probably at least superficially indistinguishable from Eucirroedia pampina.

The adult is the best life stage for identification. Currently, no other stage can be positively identified.

Occasionally, adults can be found resting during the day on heath shrubs or scrub oaks. Sometimes they flush on hot days. They come to blacklights and other lights but rarely to bait. They might fly only briefly on a given night, and their flight time may vary from night to night, possibly due to temperature.

Larvae apparently feed on new growth, flowers, and developing fruits of blueberry, scrub oak, and other shrubs in their barrens habitats.

The best time to see the pink sallow is during its flight season. Adults fly mostly in October on Long Island, although a few might emerge in late September or persist into November. The summer is spent as prepupal larvae in the soil, but it is not known how deep the larvae burrow. The phenology given should apply to the southern part of the state. If the species occurs in northern New York, eggs would hatch sometime in May, and larvae would be present until late June or early July. Adults might appear before September 15.

The time of year you would expect to find Pink Sallow reproducing, larvae present and active, eggs present outside adult, and pupae or prepupae present in New York. 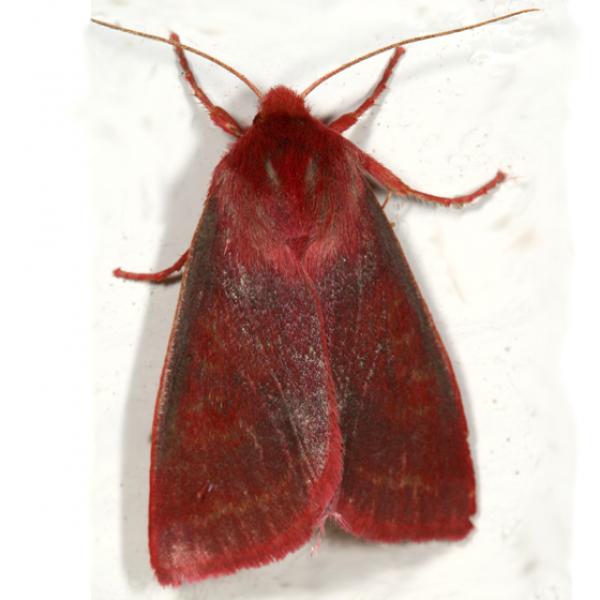 This guide was authored by: Dale Schweitzer and Andrea Chaloux