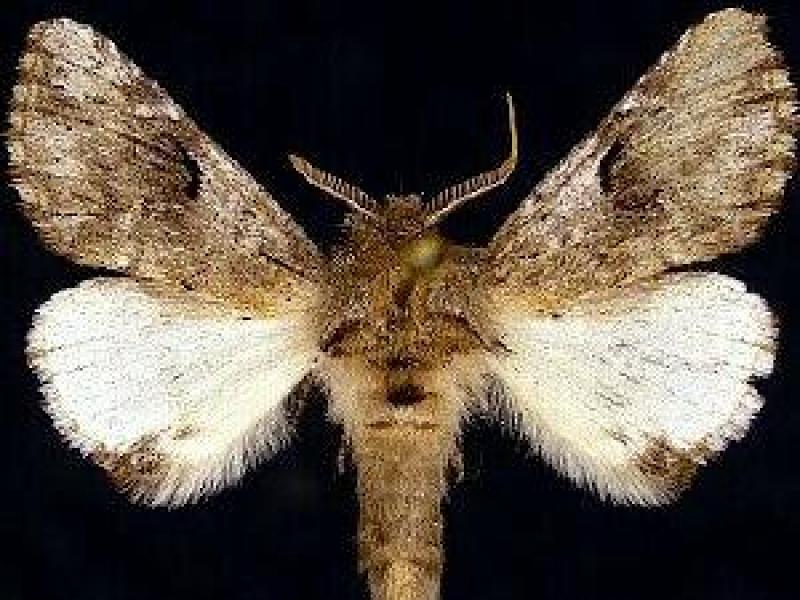 Moths in the family Notodontidae (Prominent Moths) hold their wings rooflike over their bodies at rest, giving them the appearance of a stick (Covell 1984).

As of 2012, there is one known extant occurrence in New York (Suffolk County). Additional surveys are needed to determine an appropriate rank.

The long-term trends are unknown except that it was always considered uncommon (Schweitzer et al. 2011).

Known threats include habitat loss due to development and fire suppression in some habitats, although the threat of development for the remaining habitat on Long Island may be low. The suppression of fires in barrens and other dry places could cause a loss of habitat for the species and therefore a drop in population size. Conversely, a fire affecting an entire occurrence could eliminate all life stages that are present. It is assumed that fires would cause high mortality for this species (Schweitzer et al. 2011).

The best management strategy for this species is the management of the natural community or habitat where it occurs. Historically, fire has played a role in maintaining maritime grasslands. The entire occupied habitat for a population should not be burned in a single year. For example, in places where prescribed burning is used, refugia (unburned areas) are needed for many species to ensure that any life stage can survive a fire. Schweitzer et al. (2011) suggests waiting five years before burning a unit again to give the lepidopteran population a chance to recolonize and increase local populations to withstand another fire. It may also be beneficial to know the locations of rare lepidopterans since localized populations may be lost if there are no individuals at the area set aside as refugia (Schweitzer et al. 2011).

Insecticide use should be avoided when possible if rare species are present. When insecticide use cannot be avoided, careful planning along with consistent rare species monitoring, can result in successful eradication of the target species without eliminating rare species. Schweitzer et al. (2011) states that Bacillus thuringiensis (Btk) use to control spongy moth larvae would most likely not harm plain Schizura because the larvae are not present until about one month after spongy moth larvae.

Additional research is needed to determine habitat needs and the preferred foodplant in the Northeast.

There is one known occurrence in Suffolk County on Long Island.

This moth occurred in scattered areas from southern Maine to Wisconsin and southward, including parts of Nebraska and Kansas, to Texas and Florida, but is now very rare to historical in the eastern part of its range, except on the immediate New England coast and off-shore islands. Curiously, there is no evidence this species ever (1880-2007) occurred regularly in the New Jersey Pine Barrens where there are only two 1950s specimens; one from the northern fringe and the other labeled merely "Ocean County", so possibly not even from the barrens. In the Midwest, populations have recently been found in the Wisconsin pine barrens (Ferge and Balogh 2000) and at four places in Kentucky (Covell 1999).

The following foodplants have been recorded: bayberry, blueberry, common wax myrtle, poplars, and willows (Covell 1984). Further investigations are needed to determine others (NatureServe 2011).

Adults are most likely to be encountered in June and July in the northern portion of its range.

The time of year you would expect to find Plain Schizura present and active in New York.