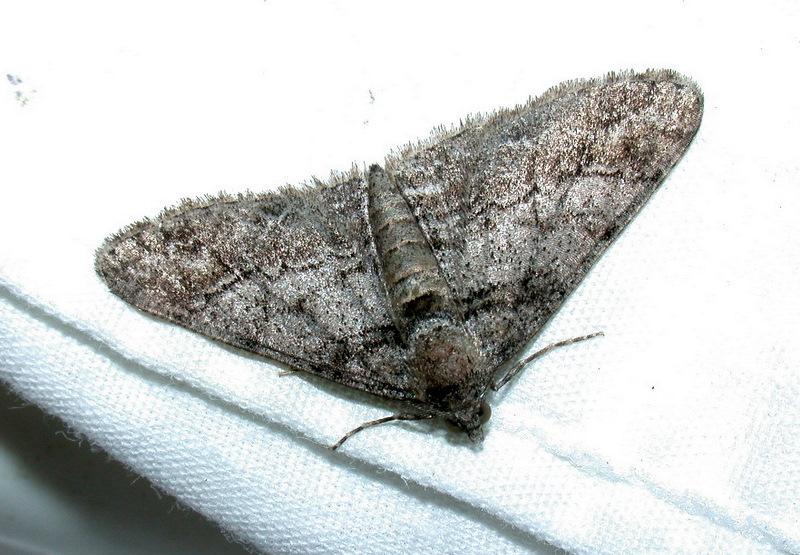 This species belongs to a group of moths that are usually cryptically colored, meaning that their coloring makes them blend in with the surrounding environment and be invisible to predators. These moths are typically gray with darker gray mottling so they are camouflaged while resting on tree trunks.

New York State has two records for this species in the dwarf pine barrens on Long Island and the Albany Pine Bush. Covell (1984) reports this species as uncommon to rare throughout its range. The food source is purported to be members of the Myricaceae family of plants (wax-myrtle family). This plant family includes sweetgale, sweet-fern and bayberry. These plants are found in many locations in New York, so the potential for more habitat is high.

This species appears to be very rare but relatively stable over the past decade. The presence of this species over multiple years at the dwarf pine barrens indicates that the population is viable and reproducing. In 2005, this species was only found in locations that burned during the 1995 forest fire.

The numbers of the Projecta Gray on Long Island have declined from historical numbers due to habitat loss from development and the suppression of fires.

Known threats include habitat loss due to development and fire suppression, although the threat of development for the remaining habitat on Long Island and in Albany may be low. The suppression of fires in barrens and other dry places would cause a loss of habitat for the species and therefore a reduction in population size. This species requires open woodland or barrens with pitch pine and scrub oaks. Forest fires are needed, on average, every 5-10 years (Jordan et al. 2003) to maintain this type of habitat. Lack of fires will result in the succession of this community to a closed-canopy forest of tall oaks and other hardwoods (Little 1979, Jordan et al. 2003). Conversely, a fire affecting an entire occurrence could eliminate all life stages that are present.

The best management strategy for this species is the management of the natural community, or habitat, where this species occurs. Maintaining the pine barrens with their full suite of plant and animal species requires frequent (every few decades) disturbance to maintain open-canopy, shrub-dominated communities and to prevent succession to a closed-canopy hardwood forest (Jordan et al. 2003). Researchers have determined that "an active fire management program utilizing prescribed fire with appropriate mechanical treatments" is the preferred method (Jordan et al. 2003). Researchers have also determined that the size, type, intensity, and timing of fires (pyrodiversity) needs to be evaluated for each site to maximize benefits to the natural community and the species it supports (Jordan et al. 2003). The entire occupied habitat for a population should not be burned in a single year. For example, in places where prescribed burning is used, refugia (unburned areas) are needed for many species to ensure that any life stage can survive a fire.

Additional surveys are needed with blacklight traps to determine the extent of the occurrence and to determine the state range. This species comes to light from April to May. In addition, research is needed on the response of this species to prescribed (controlled) burning and mechanical treatment to improve habitat.

In New York State the Projecta Gray is found in the dwarf pine barrens on Long Island and the pine barrens in Albany. These open, dry woodlands are dominated by a mixture of dwarf pitch pine/pitch pine and scrub oak. Common shrubs are black huckleberry (Gaylussacia baccata), blueberries (Vaccinum pallidum, V. angustifolium, and V. myrtilloides) and sweetfern (Comptonia peregrina).

This species is known from Long Island and Albany County.

This species occurs from Quebec to Florida, west to Mannitoba and Texas (Covell 1984).

This species can be identified from a good image or specimen. The most conspicuous features are two middorsal spots that are laterally flanked with white(Wagner et al. 2001). The wings are gray with a purplish tint (Covell 1984). Larva body can be green, brown, yellow, or reddish. There are distinct middorsal spots that are edged owtwardly with white. Addorsal, subdorsal, and supraspiracular stripes are faint with thinner stripes in between. A black ring encircles each whitish spriacle. Larva looks identical to Cleora sublunaria (Wagner 2005). Pupae overwinter.

The best time to see this species is when the adult moths are active in the late spring (May through early June).

The time of year you would expect to find Projecta Gray present and reproducing in New York.

Wagner, D. L, J. D. Lafontaine, N. McFarland, and B. A. Connolly. 2008. Early stages of Miracavira brillians (Barnes) and reassignment of the genus to the Amphipyrinae: Psaphidini: Feraliina (Noctuidae). Journal of the Lepidopterists' Society 62:40-51.