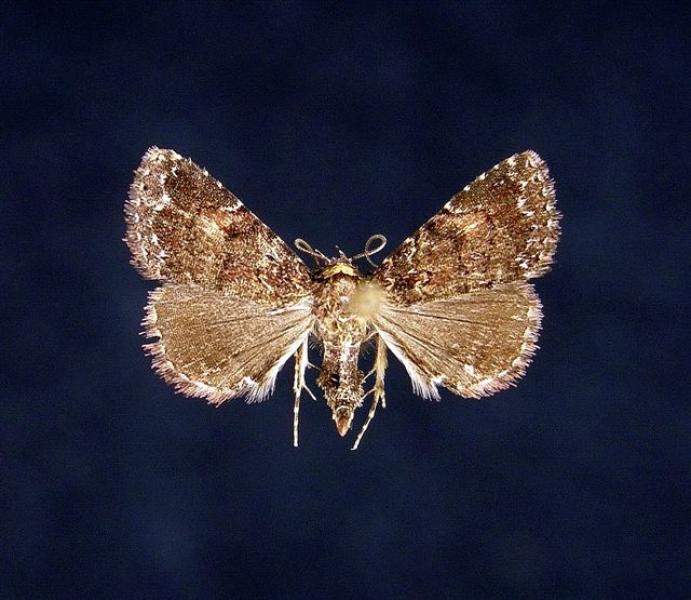 There is only one documented population of Richard's fungus moth in New York State, but the species could be more widespread. Throughout its range, the species seems to be more common than previously thought (NatureServe 2010). Its status and distribution in New York State is not well known.

The short-term trend for Richard's fungus moth in New York State is unknown. The one documented population in the state was surveyed only in 1995. However, the species is thought to be stable in most places. It appears to be increasing in southern New Jersey (NatureServe 2010).

The threats to Richard's fungus moth are uncertain. Elimination and fragmentation of habitat by commercial and residential development are probably the greatest threats to the species. Otherwise, there are no apparent threats (NatureServe 2010).

Richard's fungus moth seems to occur mostly in rather ordinary dry-mesic to swampy hardwood forests. It may be more common in areas with a lot of dead oaks (NatureServe 2010). In New York State, it is known to occur in a pitch pine-oak forest.

Richard's fungus moth is known to occur on Long Island.

Richard's fungus moth is a small moth with a wingspan of 15-17 mm. It has yellowish wings that are patterned with light and darker brown shading. The hind wings are much paler than the forewings (Covell 1984). For a more detailed description, see Brower (1941). Larvae (caterpillars) of fungus moths (Metalectra species) lack prolegs on abdominal segments A3 and A4; have rough skin; have a white, cream, or tan background; and are often found on bracket fungi and other fungi (Wagner et al. 2008).

Larvae of fungus moths (Metalectra species) are believed to feed on fungi, such as bracket fungi, on trees (NatureServe 2010). They seem to prefer bracket fungi and other fungi with long-lasting fruiting bodies (Wagner et al. 2008).

The best time to see Richard's fungus moth is during its flight season, from late May-August (Covell 1984). In New York State, adults have been captured in mid-late July. Similarly, from 1931-1941 in Massachusetts, 13 specimens were collected in July (Brower 1941).

The time of year you would expect to find Richard's Fungus Moth present and reproducing in New York.