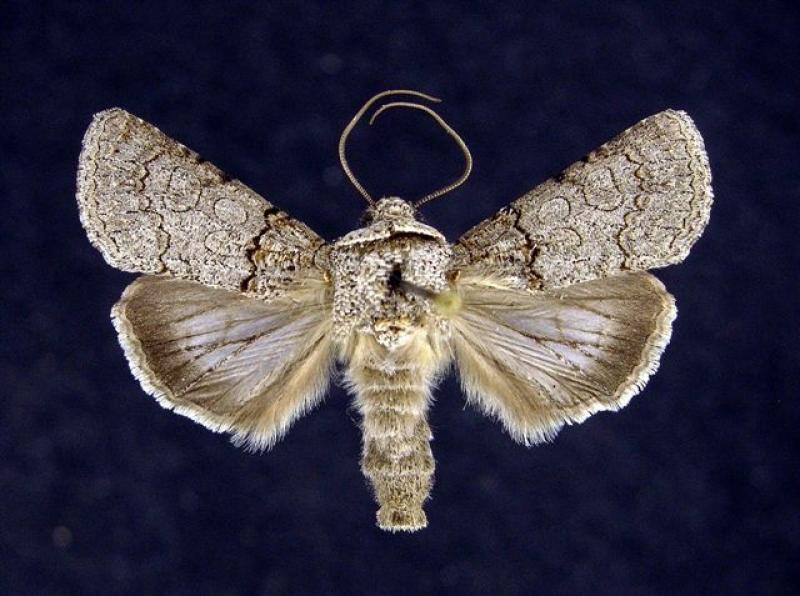 The larvae (caterpillars) of this species accumulate iridoid glycosides in their tissues, ingested from the host plants on which they feed. They are not harmed by these compounds, but these compounds make them bitter and potentially toxic to predators. Their bright black, yellow, and white coloration warns potential predators that they may be dangerous to eat (Boros et al. 1991).

Historically, the species is reported from Long Island. Its distribution is probably confined to Long Island and nearby offshore islands. Currently, one population is documented in Suffolk County. Additional surveys are needed to better understand the status and distribution of this species in New York State.

The short-term trend for the species in New York State is unknown. In recent decades, one individual was captured in 1997, but the site was not surveyed since.

The threats to the species in New York State are uncertain. The most significant threats are probably elimination and fragmentation of habitat by commercial and residential development, even though sometimes larvae are reported from small patches of the larval foodplant, old-field toadflax (Linaria canadensis) (Wagner et al. 2008). In general, anything that kills or stunts Linaria canadensis is a threat.

Research on the species' life history (particularly the timing of its larval stage, pupal stage, and flight season in New York State and other states throughout its range) is needed.

The species occurs in dry, often sandy, sparsely vegetated, grassy areas that contain the larval foodplant, old-field toadflax (Nuttallanthus canadensis). These areas can include sandplains, dunes, rock outcrops, waste lots, and other dry habitats. In New York State, the species was documented in an area consisting of beaches and bluffs.

The species is probably confined to Long Island and nearby offshore islands (Schweitzer 1998).

The species is distributed from southern Maine to Florida, west through Minnesota, Colorado, and Arizona to California. It is absent from many states in between, including Ohio (Wagner et al. 2008).

The species is mostly gray. The forewing is dark gray with well-defined black lines and black-outlined spots. The heaviest mark is the zigzag antemedial line. The postmedial line is double and wavy. The claviform spot is elliptical and larger than the round orbicular spot. The reniform spot is shaped like a crescent or is slightly curved. The wing veins are more visible beyond the postmedial line. The hind wing is dark gray and slightly lighter towards the base. The wingspan is approximately 30-33 mm. The brightly colored larva (caterpillar) is black, yellow, and white. The back is black, with uneven spots down the middle outlined in white. On each side, there is a wide white stripe around the spiracles (breathing holes) that includes large, uneven, yellow spots and blackened pinacula. The hardened plate known as the prothoracic shield is white with four distinct black spots. The head is gray-white with a sprinkling of black spots. Larvae grow to approximately 3 cm (Wagner et al. 2008).

The species is documented to have one annual generation in Connecticut, but some evidence of a partial second generation also has been documented. Additional research on the life history of the species is needed. The pupa spends the winter underground in a large cocoon (Wagner et al. 2008).

Larval foodplants include species in the genera Antirrhinum, Linaria, and Nuttallanthus (Powell and Opler 2009). In the Northeast, larvae feed on flowers and seeds (not leaves) of toadflax, especially old-toadflax (Linaria canadensis) (Wagner et al. 2008).

The time of year you would expect to find Scribbled Sallow Moth present, reproducing, and larvae present and active in New York.

The species seems to have been also referred to as Oncocnemis perscripta (Forbes 1954).