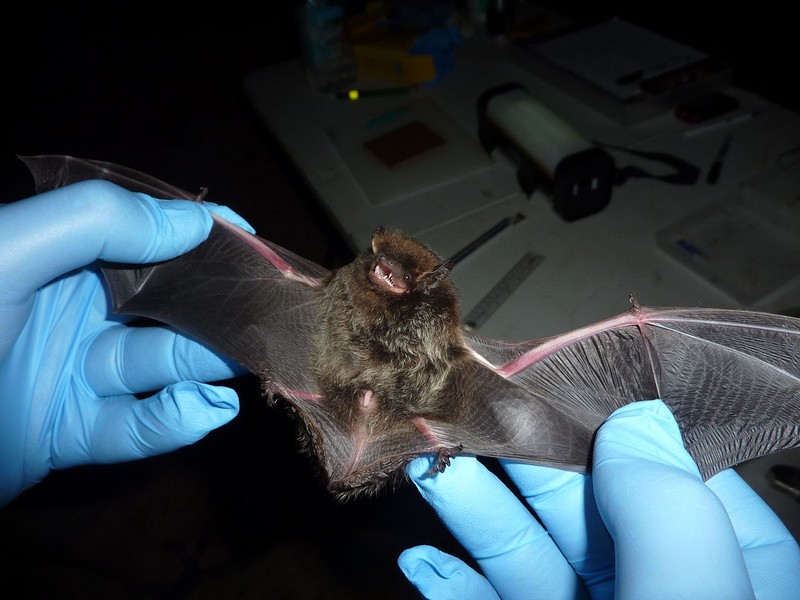 State Conservation Status Rank
S2S3B
Imperiled or Vulnerable in New York - Very vulnerable, or vulnerable, to disappearing from New York, due to rarity or other factors; typically 6 to 80 populations or locations in New York, few individuals, restricted range, few remaining acres (or miles of stream), and/or recent and widespread declines. More information is needed to assign either S2 or S3. (A migratory animal which occurs in New York only during the breeding season.)
Global Conservation Status Rank
G3G4
Vulnerable globally, or Apparently Secure - At moderate risk of extinction, with relatively few populations or locations in the world, few individuals, and/or restricted range; or uncommon but not rare globally; may be rare in some parts of its range; possibly some cause for long-term concern due to declines or other factors. More information is needed to assign either G3 or G4.

The scientific name of the silver-haired bat is derived from Greek and Latin words meaning "hairy, night-wandering bat" (Saunders 1988).

Silver-haired bats are present in New York during the summer, they migrate out of the state for the winter, and travel through during migartion. The status of silver-haired bats in New York is difficult to determine. One historical account by an early naturalist who shot and killed bats to identify them, reported that silver-haired bats were the most common bat in the Adirondack region (Merriam 1886). However, since there is no further known evidence that they were once common even regionally in New York State (Saunders 1988) their historical status is difficult to decipher. Recent work in Jefferson and Lewis counties have documented the majority of non-migration records within the state and may suggest that silver-haired bats could be locally common in that area (NYSDEC and US Army, unpublished data). Statewide, these bats are rarely captured, and records of this species outside of migration are limited. They are thought to be uncommon or rare in New York, as well as throughout most of the eastern part of their range. However, it is unknown truly how rare they are since they are often difficult to detect. Traditional mist-netting methodologies are often ineffective, and they are also typically difficult to confirm acoustically, as their echolocations may be confused with the very common big brown bat (Eptesicus fuscus). Little research has focused on this species, so more is warranted to determine the true status of silver-haired bats in the state.

This species is particularly difficult to survey and the statewide population numbers, trends and distribution remain unknown. Most records in New York are the result of collisions with wind turbines during migration. Summer records in the state are limited. The most extensive summer records have been documented from work completed by the US Army on Fort Drum Military Installation in northern NY. Also some exist from post-construction mortality monitoring on wind farms in central and northern NY. Other data on current abundance and distribution are lacking, yet necessary to assess the conservation status and the extent of threats to this species in New York.

Silver-haired bats migrate rather than congregate in caves over the winter, and have not suffered the same dramatic population declines due to White-nose syndrome which has devastated cave bat populations in eastern North America. However, silver-haired bats have been found on occasion roosting in WNS-infected caves and mines and a silver-haired bat in Delaware was recently found to have Pseudogymnoascus destructans, the fungus believed to be responsible for causing WNS. It is unknown whether WNS poses a population-level threat to this species and more research is needed.
Silver-haired bats are killed when they collide with wind turbines in New York, particularly during fall migration. It is unknown whether the numbers of bats killed at turbines during migration is high enough to impact population numbers. One study reported that silver-haired bats made up 2-15% of bat carcasses found at wind facilities in the eastern U.S (Arnett et al. 2008), but higher percentages (up to 29%) have since been reported at several wind facilities in NY, particularly those in Clinton County (Jain et al. 2011).
Incompatible forest management practices could pose a threat; however, preferred characteristics of forest stand structure for this species are unknown in the east and more research is needed.
Bats may be particularly sensitive to environmental toxins including those found in herbicides and pesticides. Bats are highly susceptible to DDT residue and this chemical was widely used as a pesticide to control bat infestations in houses in the 1940s (U.S. Geological Survey 2013). It was also widely used (including aerial application) to control mosquitoes and agricultural pests in the 1940s and 50s. It was banned with a few exceptions in 1972. Since DDT is highly persistent, with a soil half-life of 2-15 years and an aquatic half-life of about 150 years (NPIC 1999), exposure to trace residues remaining in the environment can pose a threat to bats (USGS 2013) and bioaccumulation may occur when quantities of contaminated insect prey are consumed. Extensive applications of insecticides and some bio control methods, such as Btk, could also pose an indirect risk to bats by reducing availability of insect prey.

Research indicates that raising cut-in speeds (i.e., wind speed at which turbines first start rotating and generating electrical power) of wind turbines during peak migration times may limit the number of migratory tree bats killed (Baerwald et al. 2009; Arnett et al. 2011).
In managed forests in the Pacific Northwest, the creation and preservation of snags and the maintenance of structural complexity in riparian areas and nearby uplands are important for silver-haired bats (Campbell and Hallett 1996). We know of no studies examining the response of silver-haired bats to forest management in eastern forests; however, retaining structural complexity in riparian areas and large snags, such as white pines, could be beneficial in eastern forests as well.

Much remains unknown about the specific habitat requirements, reproductive behavior, and demographics of this species. The population trends, distribution, and local abundance also remain unknown and this information is needed to assess the extent of current threats to silver-haired bats. Developments in acoustic survey methods and call analysis may be especially beneficial for this hard-to-study species. Research identifying migratory patterns and pathways is needed, as well as further research into relationships between western and eastern groups to understand seasonal movements (Cryan 2003).

Silver-haired bats occur in forested habitats, perhaps especially ones dominated by conifers. However, specific habitat in New York and their eastern range remains understudied. They forage in or near forests and water sources. Merriam (1886) reported that silver-haired bats notably foraged over water in the Adirondacks including over streams, rivers, lakes, and ponds and also along the edges and in the canopy of hardwoods. Francl (2008) reported disproportionate use of large pools by silver-haired bats compared to small and medium-sized ones in the northern Great Lakes Region.

The silver-haired bat is often characterized (along with the Lasiurus species) as a "migratory tree bat" that overwinters in southern latitudes and roosts in trees. They are known to roost under bark or in cracks or cavities, and occasionally in caves and buildings such as sheds with outdoor access (Krutzsch 1966; Harvey et al. 2011). Migrating individuals have also been observed within ground debris and in rock crevices (Wisconsin Department of Natural Resources n.d.).

The distribution of silver-haired bats is unknown. Records of this species in New York during summer are sparse and come from occasional mist-net captures and carcasses found at wind turbines in Steuben, Wyoming, Franklin, Lewis, Jefferson, Clinton, Onondaga, Oswego, Madison and Oneida County counties (Reynolds 2009, NYSDEC and US army unpublished data). Higher numbers of carcasses are found during late-summer migration at wind facilities in most of the aforementioned counties and notably in spring migration at a wind farm in Madison and Oneida County. A historical account also reported that Lewis County held important areas for silver-haired bats, noting that they were particularly abundant at Lyons Falls and at the junction of the Sugar and Black rivers (Merriam 1886). Additionally, recent work in Jefferson and Lewis counties have documented the majority of non-migration records within the state and may suggest that silver-haired bats could be locally common in that area (NYSDEC and US Army, unpublished data).

Silver-haired bats occur across a broad range that spans a large portion of North America. They range from far southeastern Alaska across most of the middle to southern latitudes in Canada and throughout the United States except for far southern latitudes including Florida and southern California. They also occur into northeastern Mexico and in Bermuda (NatureServe 2013). Silver-haired bats winter in the Pacific Northwest, in some areas of the southwest and midwest, and at middle latitudes of the eastern United States approximately from southern Michigan to Arkansas, Kentucky, and North Carolina (Izor 1979; Cryan 2003). Their distribution has been described as erratic.

The silver-haired bat can be distinguished by its pelage which is dark gray underneath and silver-tipped giving it a frosted appearance, especially in younger individuals (Kunz 1982). It differs from the hoary bat which is much larger and lighter in color and has gray-tipped yellowish-brown fur and a yellow throat (Saunders 1988).

Adults may be identified by the frosted appearance of their pelage. This may vary since older individuals may appear less frosted.

Silver-haired bats are nocturnal with periods of heightened activity at pre-dawn and dusk. They may emerge from their roosts to forage before sunset (Saunders 1988). Their flight pattern is slow and irregular with wing flapping interspersed with short glides (Saunders 1988). Merriam (1886), however, reported that their flight was less irregular than hoary (Lasiurus cinereus) or red (L. borealis) bats.

Silver-haired bats roost individually except for reproductive females which may roost in very small colonies with a few other reproductive females (Wisconsin Department of Natural Resources n.d.; Parsons et al. 1986; US army unpublished data). Segregation of the sexes by habitat and perhaps even by distribution during the summer months has been reported for silver-haired bats (Merriam 1886; Cryan 2003; Kurta 2010).

Relatively little information has been reported for silver-haired bats on diet and none from New York State. Studies from elsewhere suggest that they consume a variety of invertebrates with moths making up roughly half of their diet. Carter et al. (2003) examined fecal pellets from 2 silver-haired bats in West Virginia and found that they had consumed primarily Lepidoptera (47%) with lesser amounts of Coleoptera, Homoptera, and Diptera. Reimer et al. (2010) studied the stomach contents of migrating adult and juvenile silver-haired bats that had died after colliding with wind turbines in Alberta, Canada. They found that the major food items were Lepidoptera (39% adults, 53% juveniles) and Diptera (33% adults, 15% juveniles) with less than 10% each composition of Hemiptera, Coleoptera, and Homoptera.

Silver-haired bats are migratory and are only present in New York from approximately May-August with migrants passing through in April-May and August-September. Silver-haired bats may emerge from the roost earlier in the evening than other species (Merriam 1886; Godin 1977:19) but it would be difficult for a novice observer to distinguish them from other species of a similar size.

The time of year you would expect to find Silver-haired Bat present and reproducing in New York. 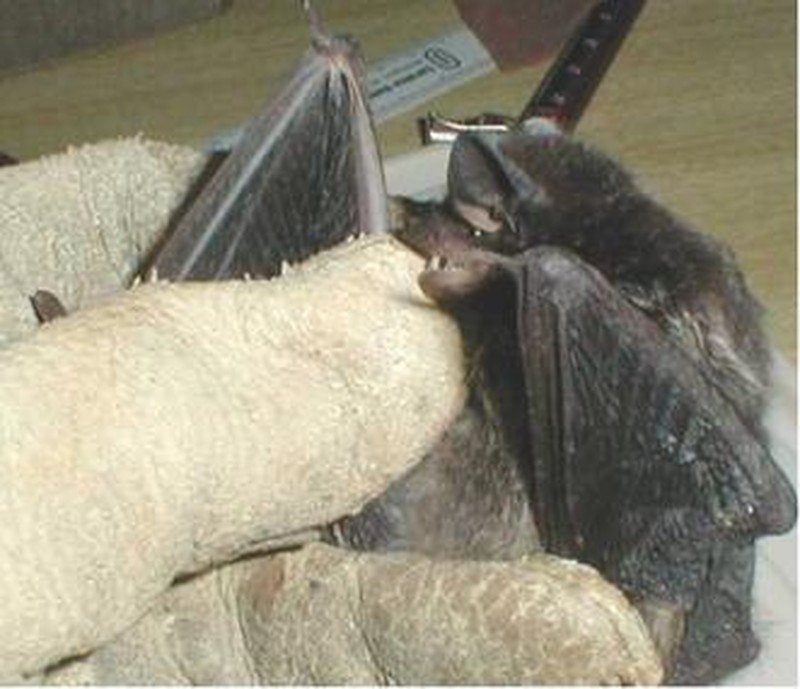 Campbell, L. A. and J. G. Hallett. 1996. Conservation of bats in managed forests: use of roosts by Lasionycteris noctivagans. Journal of Mammalogy 77:976-984.