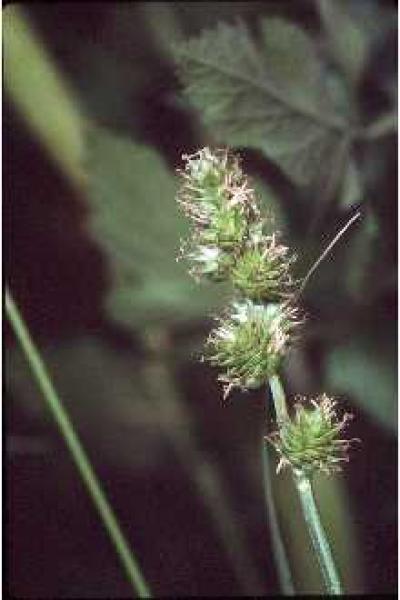 The specific epithet molesta means troublesome (Fernald 1970). This species is part of a group of closely related plants that have proven difficult to understand with three new species being described from central United States since 1997.

There are 13 known populations and approximately 20 historical locations. This is a Section Ovales sedge that is likely overlooked. It has a broad habitat requirements, although it may prefer calcareous or circum-nuetral soils. Some of the alvar populations are very large, although this habitat has been threatened by development, succession, and invasive species.

There are about a dozen populations that have been seen in recent years. No data is available about trends at these sites. The full extent of most of these populations is not known. Four populations are fairly large and healthy. A few populations are relatively small. Overall short term trends are not clear.

There are 20 to 40 populations which are only known from historical records. Almost all of these populations have not been searched for recently and it is unknown if they are still extant. This is a somewhat weedy species that likes open fields and native grasslands. It is probably more common than records indicate. As fields undergo succession in New York State this plant may decline but perhaps only back to historical levels. Overall, long term trends are not clear.

Potential threats include grazing, invasive species, ATV traffic, and shading due to succession of habitat.

Invasive species need to be monitored and controlled at some populations. ATV use needs to be restricted to trails. Habitats that stay open due to fire should be maintained as open habitats by controlled burns or by other means.

Surveys to historical sites are needed. In addition, surveys should be conducted to likely habitat such as fields in areas with limestone bedrock.

Carex molesta is known from widely scattered populations throughout most of New York excluding the Adirondacks and Catskills.

Troublesome sedge is a tufted grass-like perennial. Leaves are strap-like and 1.5-4.0 mm wide. As with other species in section Ovales, troublesome sedge has some stems with flower/fruit clusters (reproductive stems) and some stems without these structures (vegetative stems). The reproductive stems are 35-110 cm tall and have 3-6 leaves attached to the lower portion of the stems. At the apex of the reproductive stems are 2-5 tightly arranged, stalkless, round flower/fruit clusters (spikes). The upper flowers in the spikes are female and the lower male. The female flowers develop into fruits (perigynia) which are 3.0-5.7 mm long and flat (Mackenzie 1931-1935, Mastrogiuseppe 2002).

Carex molesta is cespitose and short rhizomatous. Leaf sheaths are adaxially green and have a narrow hyaline summit. Leaf blades are 1.5-4.0 mm wide. Reproductive culms are 35-110 mm long and exceed the leaves. The inflorescences are 1.3-3.0(-3.5) mm long and are composed of 2-4(-5) approximate gynecandrous spikes. The spikes are globose to ellipsoid and are rounded at the base and apex. Pistillate scales are hyaline-brown and are shorter than the perigynia they subtend. Perigynia spread at maturity, have 5+ conspicuous veins abaxially, 0-6 conspicuous veins adaxially, are elliptic to almost orbiculate, and 1.8-3.0 mm wide. Beaks are 0.7-1.6(-1.8) mm wide (Mackenzie 1931-1935, Mastrogiuseppe et al. 2002).

It is easiest to identify C. molesta when it has almost mature to mature perigynia. The whole plant is helpful in identification and should be collected.

Carex molesta starts to produce immature perigynia in June. These mature and persist into early August or sometimes later. During the later part of this season the perigynia are shedding easily. Therefore the best time to survey for this species is from June through July.

The time of year you would expect to find Troublesome Sedge fruiting in New York.

Carex molesta is in section Ovales. It is also in the informal Carex brevior group which in New York includes C. bicknellii, C. merritt-fernaldii, C. festucacea, and C. brevior (Rothrock and Reznicek 2001). Its closest allies in New York are C. festucacea and C. brevior. Other similar species such as C. molestiformis do not occur close to New York (Reznicek and Rothrock 1997). Carex molesta was lumped under C. brevior by Gleason and Cronquist (1991) but the two are distinct (Reznicek and Rothrock 1997).