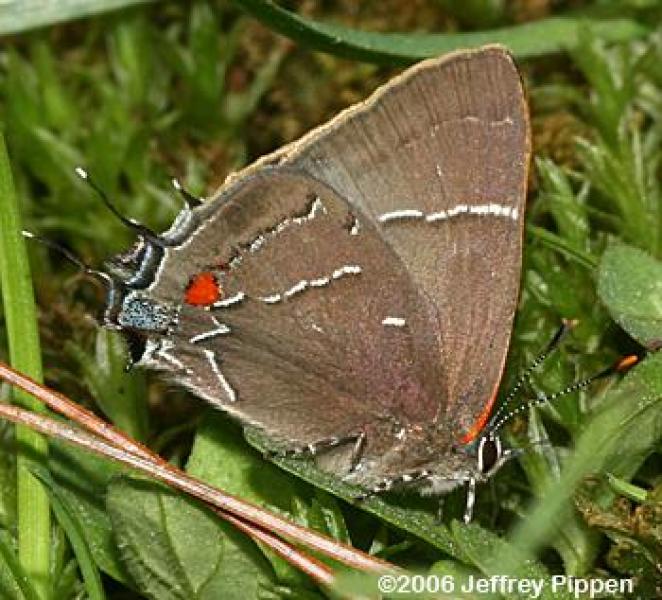 The rarely seen metallic blue color on the dorsal surface of the wings is thought to play a role in sexual selection (Sourakov 2008).

Although this species seems to have expanded its range, it nevertheless is always found in very low numbers and has been found at only a few locations confined to extreme southeastern New York. Population abundance is known to vary widely from year to year. Because it appears to be a generalist, occupying heavily urbanized areas and feeding on a variety of common food sources in both the adult and caterpillar stage, threats to the viability of populations are unclear at this time. It is not certain that this species will remain on the active tracking list in the future.

Only two records (Rockland and Richmond Counties) were reported by Shapiro (1974). Glassberg (1993) and Cech and Tudor (2005) felt that the species was expanding its range northward and by the mid 2000s the species was reported as far north as Putnam and Orange Counties (Fiore and Wallstrom 2003-2006). Matteson and Roberts (2010) reported upwards of 30 sightings of this species in the New York City metropolitan area between 2001 and 2009.

This species seems to have expanded its range northward in New York over the past four decades, possibly as a result of a longer flight season due to global warming (Glassberg 1993).

Because this species seems to be expanding in New York, threats are unclear. In general, urbanization, habitat loss and insecticide spraying can threaten butterfly populations in metropolitan New York City (Matteson and Roberts 2010).

In general, management strategies for ruderal insects of heavily urbanized areas are not relevant (NatureServe 2009). Nevertheless, Matteson and Roberts (2010) suggested three conservation strategies for butterflies of metropolitan New York: 1) locate and promote conservation of early-successional habitats such as pine-oak barrens, wet meadows and serpentine and calcareous grasslands; 2) assess the status of host plants; and 3) population monitoring.

Very little is known of the biology and life history of this hairstreak, especially in the northern part of its range. Mechanisms of range expansion and population dynamics have not been addressed.

Breeding habitats are forests, woodlands, or occasionally scrub with a substantial oak component including swamps and ridgetops if there are oaks. Adults can sometimes be observed in the oak canopy in spring before leaves open and spend much time there in summer as well. Adults wander widely and can be found on flowers almost anywhere (NatureServe 2009).

This butterfly is found in extreme southeastern New York from Orange and Putnam Counties south to New York City and Staten Island, and eastward on Long Island to central Suffolk County. This forms the extreme northeastern range extent of this northern representative of a tropical group of hairstreaks.

In the U.S this species ranges from Kansas eastward to Connecticut south to Texas and Florida. It also extends south to South America. It is most common in the deep South and central Appalachians.

The adult is about 1.5". Its tailed upper wings are iridescent blue with black borders. The underside is grayish brown, with a white postmedian line edged with black and forming a white "M" near the tails and a white costal spot. Caterpillars are yellow-green and hairy.

The dorsal iridescent blue and ventral gray with a costal white dot and white "M" in the postmedian line on the hindwings is diagnostic (Opler and Krizek 1984).

Adults obtain nectar from flowering trees, and thus this species mostly dwells in the canopy and only occasionally comes down to the forest floor to feed. Males perch watching for females; flight is fast and direct and they can drop straight down from the canopy to land on a flower to feed. Overwinters as a pupa in litter beneath host plant (Cech and Tudor 2005; Sourakov 2008).

Caterpillar hosts include various species of oaks (Quercus). Adult food sources include a variety of nectar sources such as sumac, viburnum, sourwood, wild plum, dogwood, goldenrod, and common milkweed (Opler and Krizek 1984). Adults have been observed at goldenrod, white clover, and Eupatorium perfoliatum in New York.

This species has two broods in the northern parts of its range (Opler and Krizek 1984) and Glassberg (1993) provided data from the 1980s on two flight periods in the New York City area: the end of April to the end of May, and early July to early September. Records from 2002-2005 (Fiore and Wallstrom 2003-2006) also showed two distinct flight periods (broods) in southern New York, from early April to late June, and from late August to early October, suggesting that this species has recently lengthened its flight season.

The time of year you would expect to find White-m Hairstreak present and active in New York. 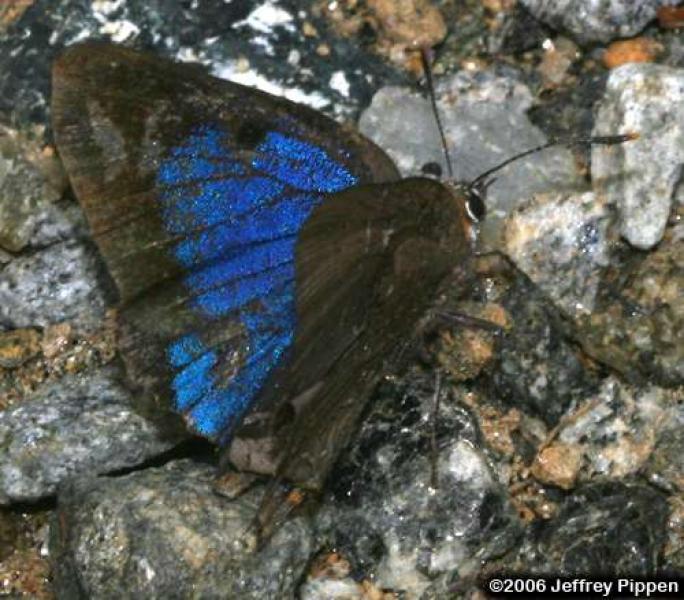 Matteson, K.C., and N. Roberts. 2010. Diversity and conservation of butterflies in the New York City Metropolitan area. Cities and the Environment 3(1):poster 18.

Information for this guide was last updated on: July 6, 2011