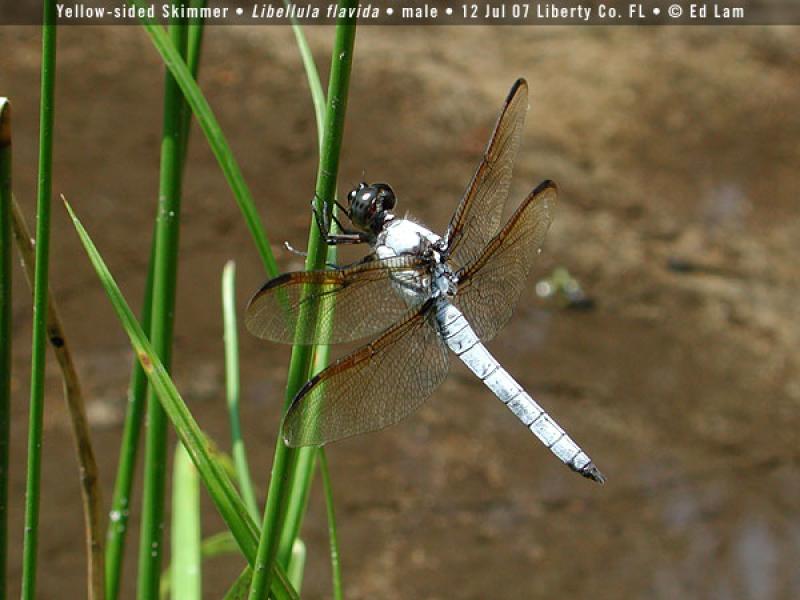 Male dragonflies in the genus Libellula are known to guard their mates while the female lays her eggs in the water at breeding habitats (Dunkle 2000).

In New York, Yellow-sided Skimmers have only been confirmed extant at one location on Staten Island and one other probable location in Suffolk County (New York Natural Heritage Program 2011). There are historical locations in Westchester and Suffolk counties, where they have not been documented in recent years and there is at least some suggestion that these historical sites are no longer occupied (Donnelly 1999).

The Yellow-sided Skimmer has been confirmed on Staten Island in recent years near sphagnum bogs and sandy barrens (Lederer 1997) in at least one location. There are two other probable locations, one on Staten Island and one in Suffolk County within the last six years (Walter and Lederer pers. comm.). There are no additional records, even from recent efforts of the New York Dragonfly and Damselfly Survey (2005-2009) and the Staten Island Dragonfly Survey (White et al. 2010, Wollney 2011). Sightings of this species are fairly recent and infrequent in New York; therefore, short-term trends are unclear but at least the Staten Island population appears to be stable.

Recent observations since 1997 have been made on Staten Island (and two other probable sightings in Richmond and Suffolk counties), but information prior to this is limited (Donnelly 1999). There is some evidence that sites on Long Island where it once occurred have been degraded and the species was once known from Westchester county as well, so populations may be in decline. There are no additional records besides the one probable record from Suffolk county with the recent efforts of the New York Dragonfly and Damselfly Survey (2005-2009) and the Staten Island Dragonfly Survey (White et al. 2010, Wollney 2011).

Any activity which might lead to water contamination or the alteration of natural hydrology could impact Yellow-sided Skimmer populations (NYS DEC 2006). Such threats might include roadway and agricultural run-off, ditching and filling, eutrophication, changes in dissolved oxygen content, and development near their habitats (NYS DEC 2006). Groundwater withdrawal is a potential threat, as are invasive species at one of the probable sites in Suffolk County (New York Natural Heritage Program 2011). Both emergence rates and/or species ranges may shift for odonate species as a result of climate change (Kalkman et al. 2008).

Any efforts to reduce roadway and agricultural run-off, eutrophication, ditching and filling activities, and development of upland borders and resulting increased groundwater withdrawal should be considered when managing for this species (NYS DEC 2006).

Further research is needed to define the distribution and population size of Yellow-sided Skimmers in New York. In addition, research is required to understand the habitat requirements and threats to this species, and to create appropriate management guidelines for its persistence in known locations (NYS DEC 2006).

Libellula flavida is known to inhabit mucky or boggy seepages mainly along the coastal plain (Dunkle 2000). In New Jersey, they have been found in acidic bogs with Sphagnum moss, mainly in abandoned cranberry bogs and along the coastal plain (Barber 1999, Bangma & Barlow 2010). In New York, a population was first documented on Staten Island in 1997 in an area with sandy barrens and sphagnum bog habitat (Lederer 1997).

New York lies at the northern range extent of the range for Yellow-sided Skimmers. There is one confirmed extant location on Staten Island (Lederer 1997). Two females have been observed by an experienced surveyor in Cranberry Bog County Park in Suffolk county since 2005 (Walter pers. comm.). While the photo for this record is slightly uncertain since it could not be separated from an immature L. incesta by experts (Donnelly pers. comm.), this should be considered a probable site for this species.

Yellow-sided Skimmers have a known range in the U.S. from Texas north to Oklahoma and Missouri east to the Altlantic coast and north to southern New York (Abbott 2007).

Yellow-sided Skimmer males have a pruinose whitish blue thorax and abdomen, black face, amber stripes along the front edge of each wing, and yellow stigmas with a black or brown outer tip (Dunkle 2000). Females and immature males have a yellow thorax with a narrow brown stripe, a tan face, and yellow abdomen with a black stripe dorsally (on the top). Females also have black wingtips to the stigma and a lateral flange on abdominal segment 8 (Dunkle 2000).

In New York, Donnelly (1999) notes the flight season as June-July and Lederer's (1997) specimens were captured on July 19 and August 10. The Suffolk county observation was July 3. Adults have been observed in New Jersey from May 11 to September 4 (Bangma & Barlow 2010) and they are known throughout their range to fly from mid-March to early October (Dunkle 2000).

The time of year you would expect to find Yellow-sided Skimmer present and reproducing in New York. 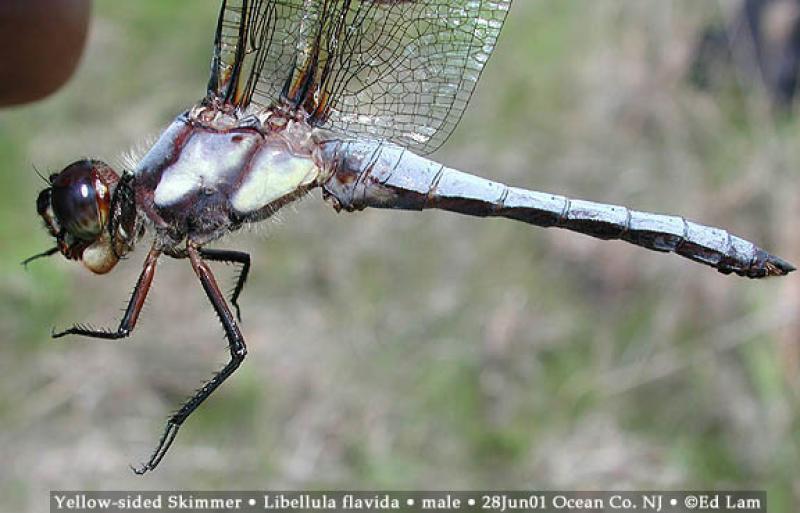 Information for this guide was last updated on: December 12, 2011