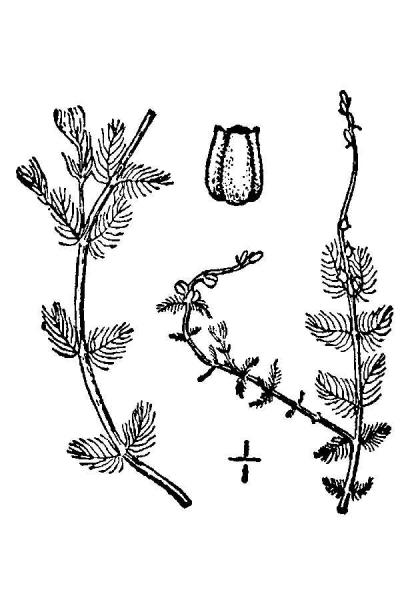 The genus name Myriophyllum comes from the Greek, murios (myrios), "countless, infinite", and fullon (phyllon), "leaf; foliage"; hence "many leaved". Small fish and aquatic invertebrates use this plant for shelter. Most populations in New York are large and contain thousands of plants.

There are only 13 verified occurrences, and 11 historical records in the state. Only two of the existing populations have 100 or more plants. Most occurrences lack accurate counts or estimates of population size. Only 3 of the sites have been visited since 1993.

Revisits to the documented sites for this species are needed in order to assess short-term population trends.

There are few data on long-term trends for this species in New York, as most stations for it have only been known for 20 or fewer years.

The use of chemical herbicides to eliminate Myriophyllum spicatum and other submerged aquatic plants is an ongoing threat to this species.

Care should be taken to survey for this species before using herbicides to control aquatic invasives (including M. spicatum).

In New York, this species has been most often collected near the shore of cold, mesotrophic, dimictic lakes with soft sandy bottoms (or within sandy patches of rocky lake bottoms), in 1 to 5 feet of water (New York Natural Heritage Program 2008). Northern species of soft water lakes and bays (Voss 1985). Lakes and rivers (Crow and Hellquist 1983). Lakes, ponds and streams (Fernald 1970).

Myriophyllum alterniflorum is found in the St. Lawrence and Hudson River drainages in northern New York. There is also a single historical record from Putnam County in the lower Hudson Valley.

Myriophyllum alterniflorum has a circumboreal distribution. In North America, it is found in most of Canada, and across the northern tier of the U.S. from Minnesota to Maine, and in all the New England states.

This is an aquatic plant that grows entirely underwater, except for the flowering spikes which emerge above the surface. It has long, slender, intertwining stems. The delicate, feathery, alternately arranged leaves are in whorls of 3 to 5 and mostly less than 1 centimeter long. The small (1.5 to 2 millimeter), hard fruits split into four parts (mericarps) have vertical rows of small projections or thick hooks along the outside.

Stems with both leaves and mature fruits are necessary for identification.

Myriophyllum alterniflorum can be distinguished from M. pinnatum and M. farwellii by having distinctly whorled leaves, from M. aquaticum (an exotic species, found in the state only on Long Island) by having emergent leaves under 2 cm, and from the other Myriophyllum species in the state by having alternately arranged bracts and flowers (except sometimes the lowermost) (Gleason and Cronquist 1991).

Small leaves, flowers and fruits are present during the latter half of the summer season.

The time of year you would expect to find Alternate-flowered Water Milfoil vegetative, flowering, and fruiting in New York.