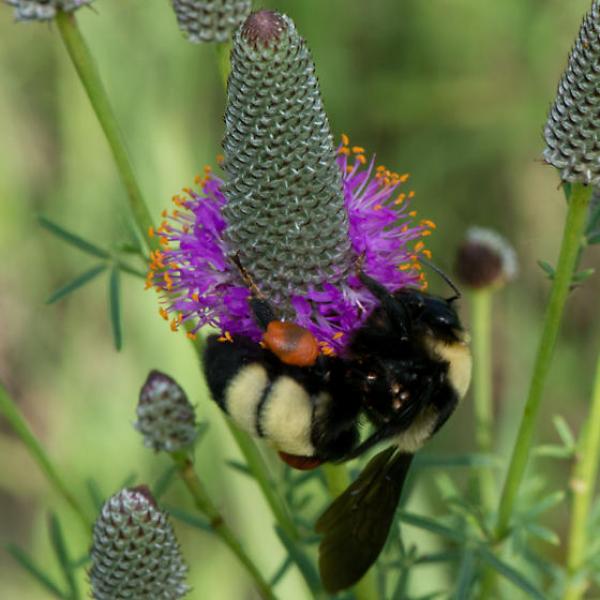 Black and gold bumble bees are known from just two New York locations (Monroe and Tompkins counties) since 1980 (Richardson 2013 and Yanega 2013). This species is only known from 8 locations overall since 1899 and appears to never have been common in NY, where it is on the northern and eastern range margin for the species. Threats to the species include habitat loss, pesticides, and urbanization (Schweitzer et al. 2012) as well as pollution and invasive species. It does not appear to be experiencing high susceptiblity to the N. bombi pathogen as with Bombus and Thoracobomus sub-genera.

There are two locations known since the 1990s (Richardson 2013 and Yanega 2013) and they have never been common in NY.

There are two occurrences in NY since 1980 (Richardson 2013 and Yanega 2013) and the species is known from 8 locations overall since 1899 and appears to never have been a common in NY.

Threats to Bombus auricomus include habitat loss, pesticides, and urbanization (Schweitzer et al. 2012) as well as pollution and invasive species. This sub-genus (Bombias) does not appear to be experiencing high susceptiblity to the protozoan N. bombi, a pathogen attributed to playing a large role in the decline of Bombus and Thoracobomus sub-genera.

Minimal to no exposure of black and gold bumble bee to insecticides would also benefit them. Suggested actions include avoidance of application to flowers that bumble bees are attracted to and application of solutions or soluble powders (rather than dusts or wettable powders) to the ground in calm wind and warmer tempertures during periods of dewless nights to minimize the impact to resident bumble bee populations (Schweitzer et al. 2012). Organic farming has also been suggested to benefit bumble bees.

Further research is needed to determine more information on habitat requirements, threats, climate change effects, and insecticide effects for black and gold bumble bees. A statewide inventory to assess the distribution and abundance of this species is also needed.

Since 1980, black and gold bumble bee has been documented in Monroe and Tompkins counties. The single record post-2000 is from Monroe County (Richardson 2013 and Yanega 2013). Prior to 1980, this species was known from six other locations statewide, but has never been common in NY.

The black and gold bumble bee range includes the eastern United States south to Florida and west to Wyoming, and in Canada, the range includes Ontario and possibly Saskatchewan west to British Columbia (NatureServe 2016).

Black and gold bumble bee queens, workers, and males have a long-shaped face and at least some yellow hairs on the top of their head and yellow banding on the thorax. Abodominal segment one usually has at least some yellow, especially laterally. Segments two and three are yellow, with the last segments black (Colla et al. 2011).

The time of year you would expect to find Black and Gold Bumble Bee active and reproducing in New York. 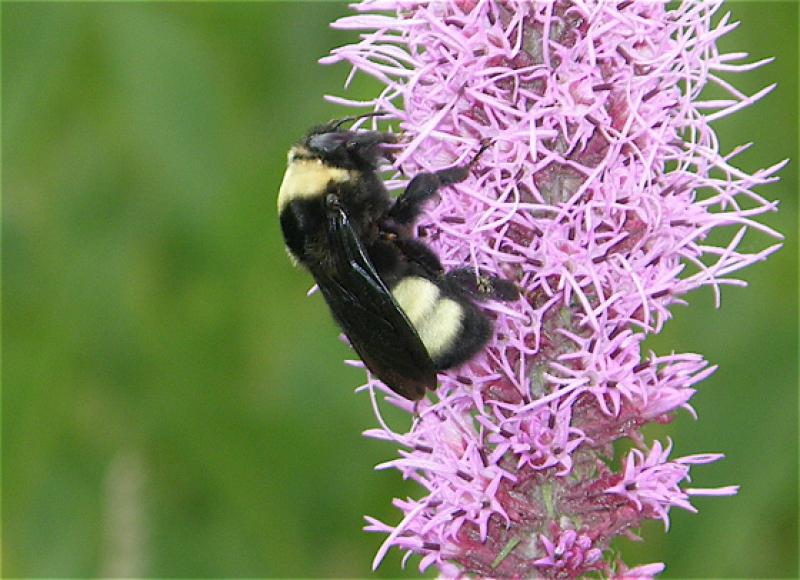 The scientific name for this species has not changed. However, NatureServe did not have a record of it occuring in NY. There are at least 4 occurrences since 1980 for this species that we will begin tracking. One of the records is considered "current" and post 2000 based on Richardson 2013 compiled dataset.

Information for this guide was last updated on: April 1, 2016