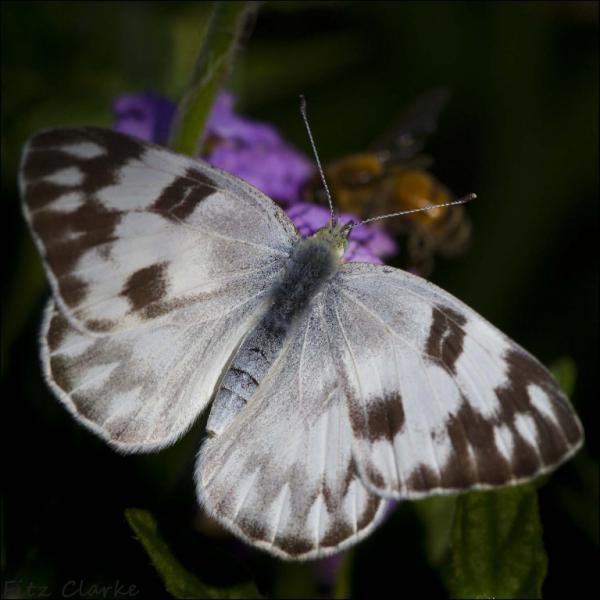 There is a spring (short-day) and summer (long-day) form of checkered white. The spring form has strongly reduced black marks above and there is heavy green veining ventrally (Opler and Krizek 1984). Shapiro (1968) showed that the color variation is the result of larvae subjected to long nights of more than 14 hours in the spring.

There are two occurrences in New York as of 2012. There was a proposal to develop one of the sites.

The short-term trends are unknown. This species hasn't been reported since 1990. However, it is not known if there have been any surveys targeting this species since then.

Populations appear to be declining. It is believed that the decline could be, at least in part, due to the introduction of the parasitoid wasp (Cotesia glomerata) to control cabbage white populations.

Checkered white populations may have declined because of the introduction of a parasitoid wasp, Cotesia glomerata that was released to control cabbage white populations. The wasp also attacks other pierine butterflies (Schweitzer et al. 2011). Development and railroad and road maintenance are also threats as this species has been found in areas with such pressure in New York.

This species often occurs along roadsides and railroads. Maintenance in these areas should be done to reduce the impact to the species. Broadcast use of herbicides should be avoided. Instead, it has been recommended that herbicides be applied to specific target species (Schweitzer et al. 2011).

In general, this species can be found in a variety of disturbed habitats lacking heavy shade, such as vacant lots, railroads, airports, and grasslands that also contain their mustard and caper foodplants (NatureServe 2011). In New York, the species has been found in sandy or gravelly disturbed areas with sparse vegetation.

Populations have been documented in Queens.

Checkered whites can be found from southern Canada south to northern Mexico. They are absent from the Pacific Northwest. In recent times, this species is also absent from New England where there is some question if it ever was a resident in the area. Occurrences are becoming more erratic east of the Appalachians (NatureServe 2011).

Checkered whites are 44 to 62 mm. Upperside: Males have a black and white checkered-pattern on the outer half. The hindwing is white. Females are more heavily checkered above. Underside: The hindwing is faintly checkered in males. Females have a yellow-tan pattern on the hindwing and forewing apex (Opler and Malikul 1992). Both sexes have a quadrate black mark in the dorsal forewing cell (Opler and Krizek 1984). There are two forms noted: spring and summer. The male has one to three black marks in the postmedian forewing area. Its ventral hindwing is weakly veined with gray-green. The summer female is boldly marked with much black on the forewing and apex and outer margin of both wings. Ventrally, females' gray-green veins are much more distinct. The spring form of both sexes have strongly reduced black marks above, but very heavy green veining ventrally (Opler and Krizek 1984). The caterpillar is alternately striped yellow and purple-green. The body has many small tubercles (Opler and Malikul 1992).

Flight is low and erratic.

Foodplants include species from the mustard and caper families.

Shapiro (1974) states that there are four broods on Staten Island. Adults can be found March through November (Opler and Malikul 1992).

The time of year you would expect to find Checkered White present and active in New York.

Information for this guide was last updated on: June 6, 2012