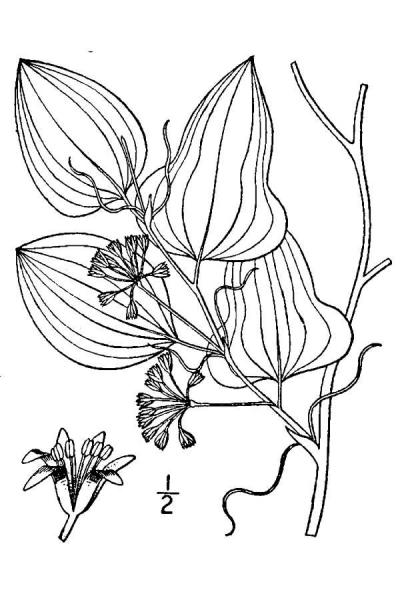 This plant was named after the Asian species Smilax china (China-root) because it has similar characteristics and is used medicinally as the medicine sarsaparilla (Fernald 1950). There are 4 times as many species of Smilax in China than all of the US and Canada (Wikipedia contibutors). There is a Greek myth about the story of the mortal Crocus being seduced by the forest nymph Smilax (Mifsud 2010).

There is one existing population without information about its quantity or quality. There are four populations from the late 1800s to 1931 that need to be resurveyed to see if they still exist. There are five populations that no longer exist because their habitat has been destroyed.

The long-term trend is strongly negative. Even though this plant has always been very rare in New York, only one population currently remains from the nine that existed during the last 100 years.

More survey work is needed to identify the management needs of this species.

Propagation studies should be done to see if the population can be augmented.

The single occurrence is located in damp pine barrens in a park preserve along a watercourse through a suburban area. A historical record grew in abundance on the banks of a brook on Staten Island (New York Natural Heritage Program 2012). Moist or wet low places on the coastal plain (Gleason and Cronquist 1991). Bogs, wet woods, and marshes (FNA 2002).

This vine grows only in Nassau County, Long Island. There are a couple of historical records from Staten Island which are probably extirpated.

This vine grows on the Atlantic coastal plain from Long Island south to South Carolina with scattered populations west to Georgia, Alabama, and Mississippi.

False China-Root is an herbaceous, annual vine that reaches up to 2 meters in height by climbing on the surrounding vegetation. The stems are smooth and not prickly. There are many leaves along the stem and most of them have tendrils at the base that help the plant climb. The leaf blades are 5-12 cm long, thin and hairless, green above and whitish below. The larger ones have wider rounded bases with concave sides and are slightly heart-shaped at the petiole. The tips are rounded with a short point. The two or three long flower peduncles arise from the base of the leaf and are longer than the leaf petioles and sometimes about as long as the leaf. They are round in cross-section. The round flower cluster at the top of the peduncle contains 10-30 green flowers with tiny sepals and petals both 1.5-2.5 mm long. The berries are blue to black with a white waxy covering and 4-6 mm in diameter (FNA 2002).

Distinguishing characteristics: stems herbaceous, annual, unarmed; upper bracts at base of stem gradually changing to foliage leaves, the lowest leaves distinctly smaller and narrower than those above; fully developed leaves green on both sides, more or less deltoid-ovate or panduriform, the blade with 3 prominent nerves running into the abruptly bent or twisted tip; leaf margins straight or concave; pedicels 3-10 (-15) mm long, arising from the axis of foliage leaves; tendrils present; tepals 1.5-2.5 mm long; filaments shorter than to about equaling anthers; styles slenderly clavate; berries blue to black, with sweet and date-like pulp. Best life stage for ID: in fruit or flower. Characteristics needed to ID: stem with leaves and fruit or flowers.

This vine can be identified vegetatively with leaf characters but is best seen in flower and/or fruit.

Smilax herbacea and Smilax pulverulenta are the other two herbaceous species of Smilax lacking prickles. Their leaf margins are convex instead of concave and the flower petals are larger, 3.5-5 mm. Smilax pulverulenta has leaf blades with dark green undersides covered with transparent hairs. Both species have flat flower peduncles instead of round ones. The fruits look similar. All other species of Smilax are woody perennials with prickles (FNA 2002).

The time of year you would expect to find Coastal Carrion Flower vegetative, flowering, and fruiting in New York.