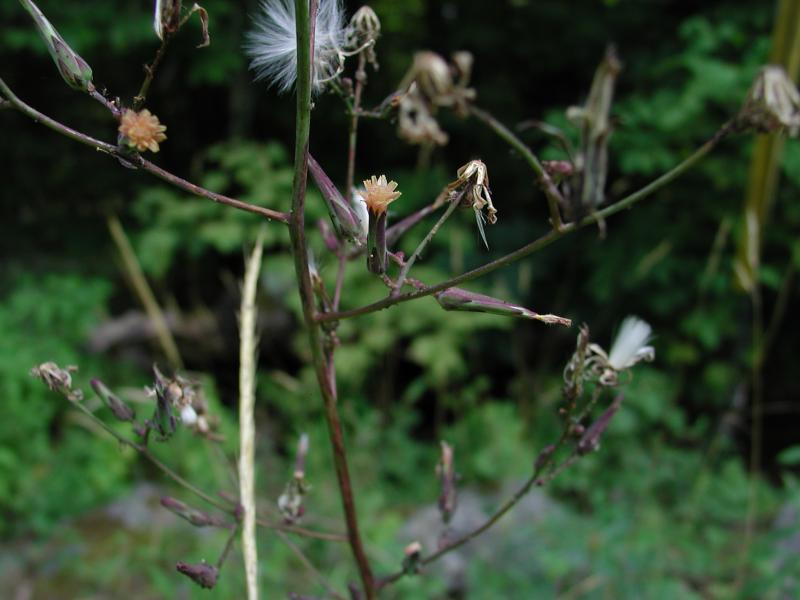 State Conservation Status Rank
S1
Critically Imperiled in New York - Especially vulnerable to disappearing from New York due to extreme rarity or other factors; typically 5 or fewer populations or locations in New York, very few individuals, very restricted range, very few remaining acres (or miles of stream), and/or very steep declines.
Global Conservation Status Rank
G5?
Secure globally (most likely) - Conservation status is uncertain, but most likely common in the world; widespread and abundant (but may be rare in some parts of its range). More information is needed to assign a firm conservation status.

Unfortunately this beautiful Lactuca has been omitted from many of our popular wildflower guides (except for Peterson's Guide) so it probably goes unnoticed. There is one identification tip that is not in field guides and can be seen from a distance. It is the way the inflorescence branches are more open with longer secondary branches that often point in different directions. The common Lactuca biennis or L. canadensis have more compact inflorescences with many more flower heads in them.

There are 5 verified occurrences, and 20 remaining historical sites to check, but populations have been extirpated from 5 sites by development.

The short term trend is unknown as only two confirmed extant sites have count data. At the site with a larger poopulation and a number of revisits the numbers flucuated over a 10 year period ranging from 120 to 60 and back to 135 ramets. Overall, the documented populations have generally been small with numbers ranging from 1 to 135 plants. Typical numbers have been 20 or fewer plants. Only four populations have been confirrmed since 2005.

The long term trend appears to be a significant decline. Out of 30 originally documented populations 5 have been extirpated, 6 additional populations have not be relocated during revisits since the 1990's. Of the original 30 sites 17 have only been visited once and 15 of these were documented in the 1950's or earlier. Due to the short lifespan of this plant revisits are needed at all sites to confirm the long-term trend of this species.

Intensive road-right of way and road maintainance activities may threaten this species including regularly being run over, covered up or mowed during the growing season. Destruction of the plants and habitat loss from sand mining is also a threat. The application of herbicides immediately following timber harvests on occupied sites could also be a threat.

This is short-lived, apparently early successional species, management activities such as periodic prescribed burning, spring or fall mowing or brush cutting may facilitate maintanence of favorable site conditions. Avoid the application of herbicides to occupied sites or within a distance where non-target drift could occur. Avoid covering or driving over plants with equipment or vehicles during the growing season or for prolonged or ongoing periods. Protect plants from destruction at sites with active sand mining.

Due to the short life span of individual plants, studies are needed to understand the length of viability and persistence of Lactuca hirsuta's seed in the seedbank and the associated population dynamics of this species.

Lactuca hirsuta has been found throughout New York state.

Lactuca hirsuta ranges from Prince Edward Island west to Ontario and south and west through Maine to Michigan, Illinois and southwest to Oklahoma and Texas, and south and east to Georgia.

Lactuca hirsuta is an erect, branching, biennial herbaceous plant with a taproot it is typically one stemmed, and bears milky juice. During its first year it only forms basal rosettes, during its second year it grows up to 1.2 meters but is generally 80 cm or less tall. The leaves are alternate, rarerly prickly, chiefly limited to the lower (proximal) 1/3-2/3 of each stem,  and have  margins that are entire or with very fine teeth (denticulate) and midribs that are usually bristly-hairy. Florets are yellow (sometimes drying bluish) with purplish to greenish whorled bracts (involucres) 12-20 mm long. They are borne in more or less flat-topped (corymbiform), or tall pointed topped arrays with progressively shorter branches (paniculiform) towards the top of the plant. The fruit are dry, one-seeded cypselae with one prominent nerve and do not split at maturity, the body and beak have a combined length of 7 to 10 mm.The length of the hairs (pappi) forming a tuft at the tip of the fruit is 8-12 mm long.

Lactuca canadensis is somewhat similar in appearance to L. hirsuta, but can be distinguished by its smaller flower heads, also in fruit the whorl of bracts surrounding the base of the florets (involucre) are 10 to 15 mm vs. 15 to 22 mm long. The fruits (cypselae) of these species differ in size, the body and beak of L. canadensis' have a combined length of 5 to 6 mm while it is 7 to 9mm for L. hirsuta. The length of the hairs (pappi) forming a tuft at the tip of the fruit also separate the two, with a length of 5 to 7 mm for L. candensis and 8 to 12 mm on L. hirsuta.

The time of year you would expect to find Tall Hairy Lettuce flowering and fruiting in New York. 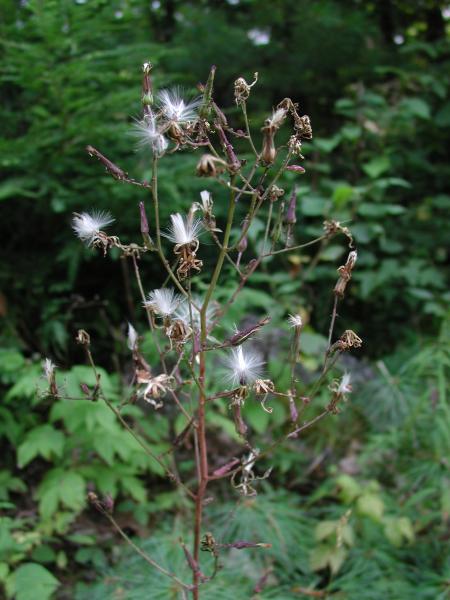