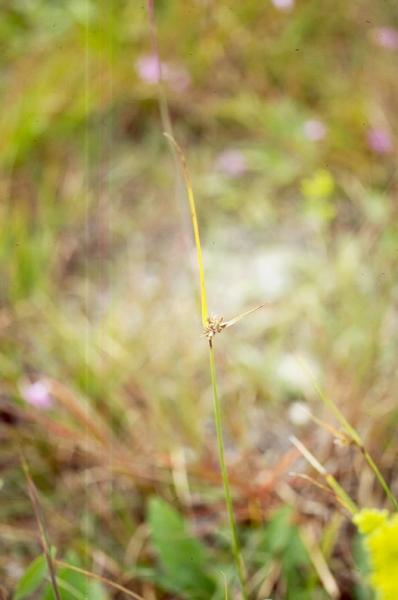 State Conservation Status Rank
S1
Critically Imperiled in New York - Especially vulnerable to disappearing from New York due to extreme rarity or other factors; typically 5 or fewer populations or locations in New York, very few individuals, very restricted range, very few remaining acres (or miles of stream), and/or very steep declines.
Global Conservation Status Rank
G5T4T5
Apparently or Demonstrably Secure globally - The subspecies/variety is uncommon to common in the world, but not rare; usually widespread, but may be rare in some parts of its range; possibly some cause for long-term concern due to declines or other factors. More information is needed to assign either T4 or T5. (The species as a whole is common globally.)

This species is most common in Virginia and the Carolinas (the Biota of North America website). Its species name means few-flowered (Fernald 1950).

The short-term population trend appears stable, but more survey work is needed to determine this.

The long-term trend is strongly negative. Plants have been in severe decline over the last 100 years as their habitats on Long Island have been lost to development.

Loss of open-canopied conditions the grassland habitat due to the succession of shrubs may be a threat.

Disturbance regimes should maintain the open grassland habitat of these plants.

Propagation studies need to be done to see if populations can be augmented. The proper disturbance regime should be studied to maximize population numbers.

The plant can be found among other wildflowers and grasses in disturbed open grasslands and along sand roads within pitch pine-oak forest or pitch pine scrub oak barrens. One population is in a cleared area around the margin of a pond. Historical records also occurred in Hempstead Plains grasslands (New York Natural Heritage Program 2012). Dry to mostly wet pinelands, mesic woods, meadows, bogs (FNA 2002). Damp or dry, sandy or sterile soil (Gleason and Cronquist 1991).

This small sedge occurs in Nassau and Suffolk Counties, Long Island. It is considered extirpated from Queens. There are historical records from areas north of New York City in Westchester and Dutchess counties.

This is common in the Southern states from eastern Oklahoma and eastern Texas east through North Carolina and Virginia. There are scattered populations north into Kansas, Missouri, Illinois, Indiana, Ohio, and Michigan and also up the East Coast from Maryland to eastern Massachusetts. It is mostly absent from eastern Georgia and the peninsula of Florida.

Scleria is a genus of sedge with 3-angled culms, dimorphic spikelets, and conspicuous white achenes. Few-flowered nut-rush is an erect, very hairy plant that grows 2-5 dm tall from clustered and elongate rhizomes. The leaves are 1-3 mm wide and very hairy, with hairs from 0.5-1 mm long. The spikelet clusters are usually terminal, solitary and sessile although, there can be another one or two clusters below on short peduncles. Each cluster has 1-7 spikelets. A long narrow leaf-like bract grows up from below the inflorescence from 2-5 mm long. Flower scales are ovate and very long pointed. The achene is white, rounded, 1-2.5 mm in diameter with a rough surface. It has a small point on the top and 6 rounded tubercles at the base (FNA 2002).

This species is best identified in fruit.

The other six taxa of Scleria in New York all occur within the range of Scleria pauciflora var. caroliniana and are best differentiated in fruit. Scleria pauciflora var. pauciflora is different only in its hairiness. Variety caroliniana is very hairy but variety pauciflora is hairless or somewhat hairy and its hairs are less than 0.5 mm long. Scleria triglomerata and Scleria minor have smooth achenes without distinct lobes or tubercles below, only a disk with whitish to brownish papillae. Scleria reticularis and Scleria mühlenbergii have rough achenes with 3, not 6, oblong lobes at the base and their flower clusters are more open paniculate with visible branches. Scleria verticillata has no disk or lobes at the base of the achene and the plants are annual and lacking rhizomes (FNA 2002).

The time of year you would expect to find Few-flowered Nutrush fruiting in New York.