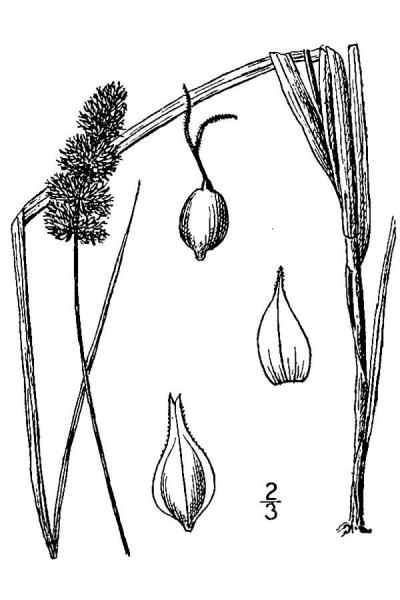 A different sedge species (Carex gravida) was reported from New York for many years but specimens formerly identified as such were determined to be misidentifications of C. aggregata and/or C. sparganioides. This led to the removal of C. gravida from the checklist of New York State plants.

There is only one known population within New York, however a subsequent survey to this site was not able to relocate this population. The original report indicates this was a very small population. This population needs further survey work. Fewer than five populations have ever been reported from New York which is at the northeastern edge of this sedge's range. Tony Reznicek, University of Michigan and Flora of North America Carex author, has seen and verified the identity of the only known New York population.

There is only one known population that has been seen within the past 20 years. An attempt at relocating this population was unsuccessful but there was more habitat to search. Overall short term trends are unknown.

One population is known from a cemetery. The impacts of cemetery management are not known, but it may be useful to monitor the impacts or benefits of mowing and other management activities.

Information about the one population known from a cemetery as well as conservation concerns need to be communicated to the owners of the property.

Surveys to historical occurrences are needed. In addition, one population that was seen in 1988 needs to be relocated and surveyed.

There have only been a few populations ever reported from New York. These are scattered from the southern tier of western New York, through central New York, and into southeastern New York including Long Island.

Carex aggregata is a tufted, perennial, grass-like plant. It has long strap-like leaves that are up to 3.5 to 5.0 mm wide. From the tufts of leaves at the base of the plant, a stem 20-100 cm tall arises. Leaves come off of this stem and at the top of the stem is a dense cluster of flowers/fruits. The flower/fruit cluster is 1.5-5 cm long, 8-13 mm wide, and contains many numerous, small, and inconspicuous flowers. Small (3.4-4.6 mm long) green fruits (perigynia) form from the flowers (Ball 2002).

Carex aggregata is a cespitose perennial. The rhizomes are inconspicuous. Culms are (20-) 30-100 cm long. Leaf sheaths are usually loose with the fronts hyaline and the summit of the fronts yellow or brown and thickened. The backs of the proximal leaf sheaths are green and white striped and mottled with conspicuous cross veins. Leaf blades are up to 3.5-5 mm wide. The ligules are shorter than to as long as wide. There are 5-10 androgynous short spikes densely clustered on the top (1.5-) 2-5 cm of the culms. Pistillate scales are 2.2-3.5 mm long, acuminate to short-awned, and the bodies of the scales are 0.67 times to almost as long as the perigynia. The anthers are 1.5-2.5 mm long (Ball 2002).

Carex aggregata is easiest to identify when it is in mature fruit but the fruits are not yet easily shedding.

There are three other members of Carex section Phaestoglochin (C. sparganioides, C. cephaloidea, and C. gravida) that are similar.

Carex sparganioides is perhaps the most different from C. aggregata of these three. It has a more elongated inflorescences (3-15 cm long) with a larger proximal internode. In addition the widest leaf blades are 5-10 mm wide (Ball 2002).

Carex cephaloidea is the most similar to C. aggregata of the species that occur in New York. Carex cephaloidea has the widest leaf blades (4-)5-8 mm wide and the ligules are just longer than wide. In addition, the pistillate scales are 1.5-2 mm long, subobtuse to acute, and the bodies are no more than 0.5 times the length of the perigynia (Ball 2002). Mackenzie (1906) in his description of C. aggregata (as C. agglomerata) used culm scabrousity to separate C. cephaloidea and C. aggregata. The angles of the culms of Carex cephaloidea being strongly serrulate while those of C. aggregata are only roughened just below the inflorescence. These character states may be incorrect or subtle.

Carex gravida does not occur in NY but was attributed to the state incorrectly in the past (Mitchell and Tucker 1997, Mitchell 1998). It is not expected in the state. Carex gravida mainly differs in having the summit of the leaf sheath fronts white, hyaline, not thickened, and fragile (Ball 2002).

Carex aggregate is in just immature to mature fruit that are not easily shedding from June through early July. Therefore surveys are most successful if conducted during this time period.

The time of year you would expect to find Glomerate Sedge fruiting in New York.

Carex aggregata is in section Phaestoglochin. This section had previously been lumped under section Bracteosae which is now considered a distinct section from Central and South America (Ball 2002). Specimens previously identified as C. gravida from NY were misidentifications of C. aggregata or C. sparganioides (Mitchell 1998).