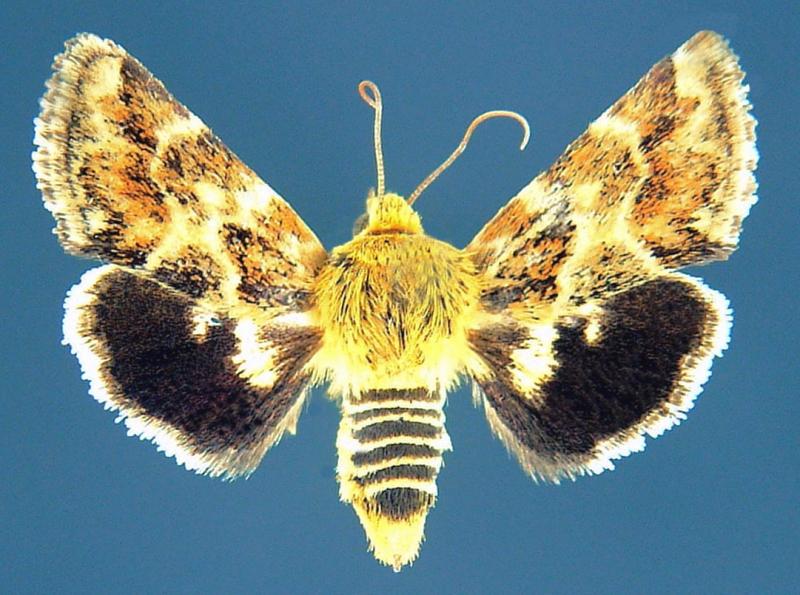 Schinia is one of the largest and most successful genera of Lepidoptera, containing more than 120 species in North America (Wagner et al. 2008).

Currently, the golden aster flower moth is known from only one location in the the Dwarf Pine Barrens on Long Island. There are several historical records from Long Island, however, additional surveys are needed to determine if it is still present at these and other locations. Although there is much suitable habitat on Long Island, this moth seems to be absent at many sites that appear to provide suitable habitat. It is best sought during the day by sweeping the flowers of its food source, and therefore it may be overlooked during field surveys. However, it also comes to blacklight. This moth is unlikely to occur elsewhere in the state outside of Long Island, since Long Island represents the northern edge of its range, and within New York its food plant occurs only on Long Island.

The short-term trend for this species in New York State is unknown. Only one individual was documented on one occasion in the Dwarf Pine Barrens of Long Island during surveys conducted in 1999 and 2005.

The long-term trend for this species in New York State is unknown. There are several historical records from Long Island that should be surveyed.

The threats to this species on Long Island are uncertain. It has been documented in the Dwarf Pine Barrens of Long Island, where fire is necessary to maintain the habitat type. However, this moth also occurs in other habitats, and thus it is not considered a barrens specialist. Elimination and fragmentation of habitat by commercial and residential development are probably the most significant threats to this species.

Areas where this species has been found should be evaluated to avoid additional encroachment or fragmentation by development. In addition, minimizing lighting to maintain dark sky conditions would be beneficial.

The current record and all historical records for this species in New York are from Long Island.

This moth is found in the eastern United States from New York to Florida and west to Oklahoma and Texas (Heppner 2003). The moth appears to be rare in New York, and records of the species in Massachusetts are historical (NatureServe 2010). Currently its main range extends from South Carolina to Florida and westward.

The golden aster flower moth is cryptically colored. Similar to many other flower moths (Wagner et al. 2008), its coloration is variable. In fact, seven different variations in appearance (phenotype) have been documented in Louisiana (V. Brou, personal communication). The forewings usually contain various shades of gold or red, and the hind wings usually are predominantly dark brown. Both the forewings and hind wings contain pale patches. The wingspan is approximately 20 mm. Males seem to have larger wings than females, and the pattern on the forewings of males and females is different (Brou 2006).

This moth species has one annual generation. It is active both during the day (from the late morning to the afternoon) and at night (Hardwick 1996). During the day, it can be found resting on the stems and flower stalks, or feeding on the flowers, of its food source, Pityopsis falcata (sickle-leaf golden-aster, sickle-leaf silkgrass) (Wagner et al. 2008). At night, it is easily taken at light (Hardwick 1996).

The best time to see golden aster flower moths is during their flight season. In New York State, the moths have been documented to fly from late July to mid September.

The time of year you would expect to find Golden Aster Flower Moth present and reproducing in New York. 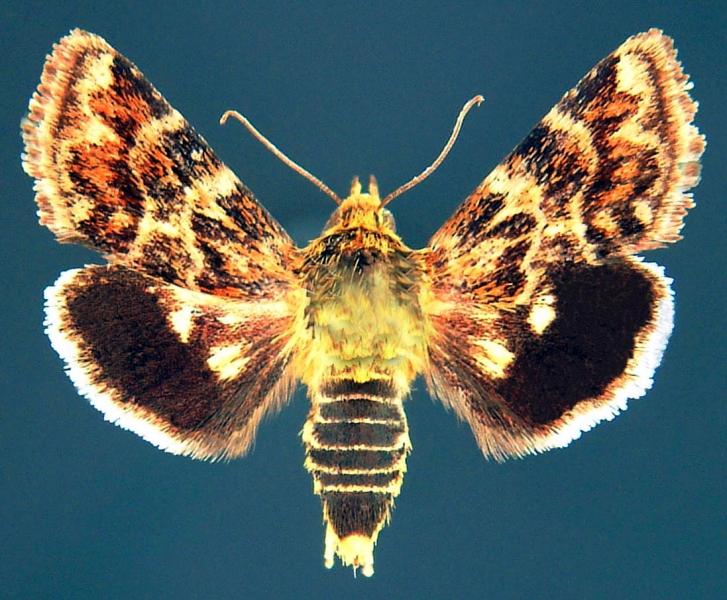 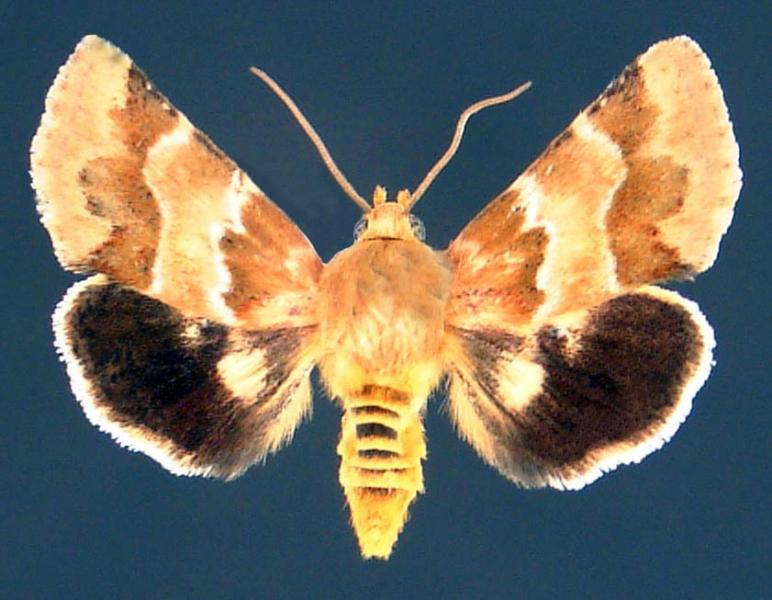 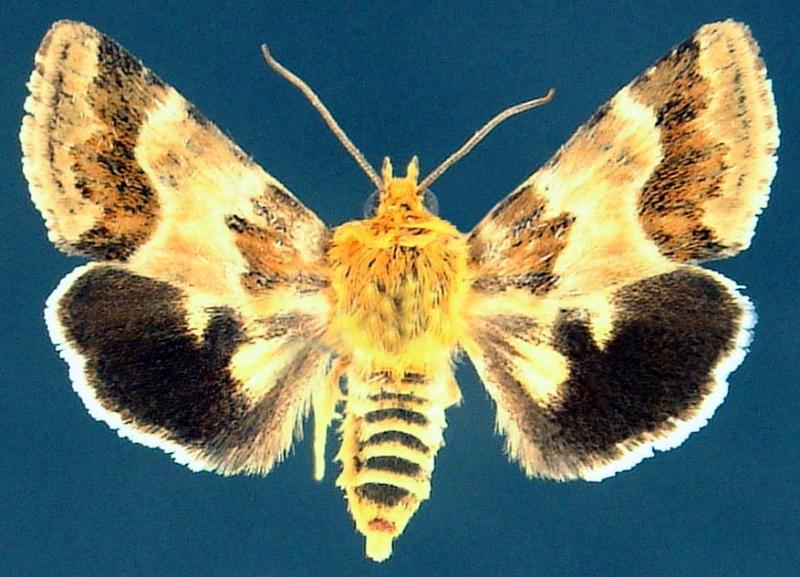 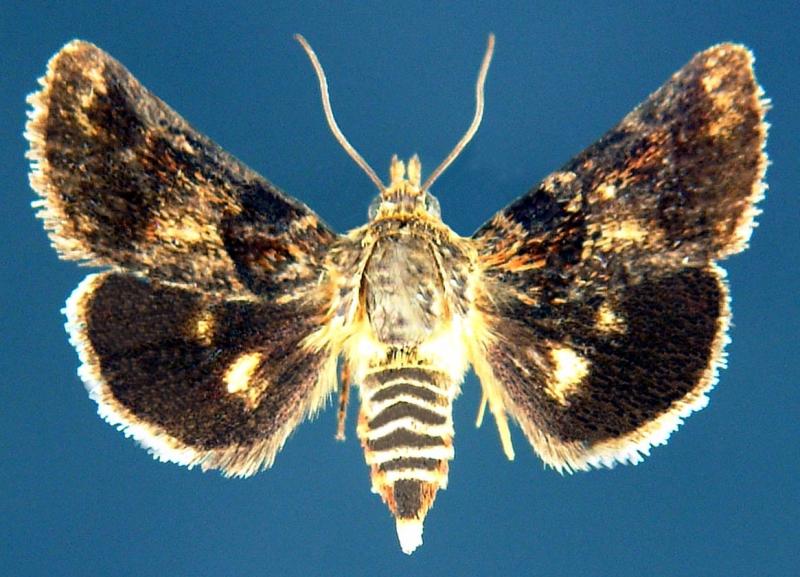 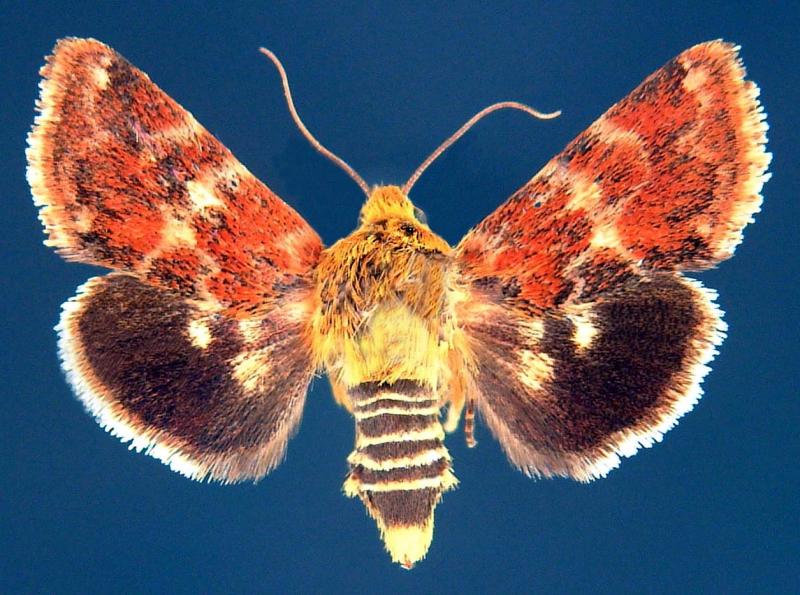 In Covell (1984), an illustration of Schnia septentrionalis is mislabeled as Schinia tuberculum.