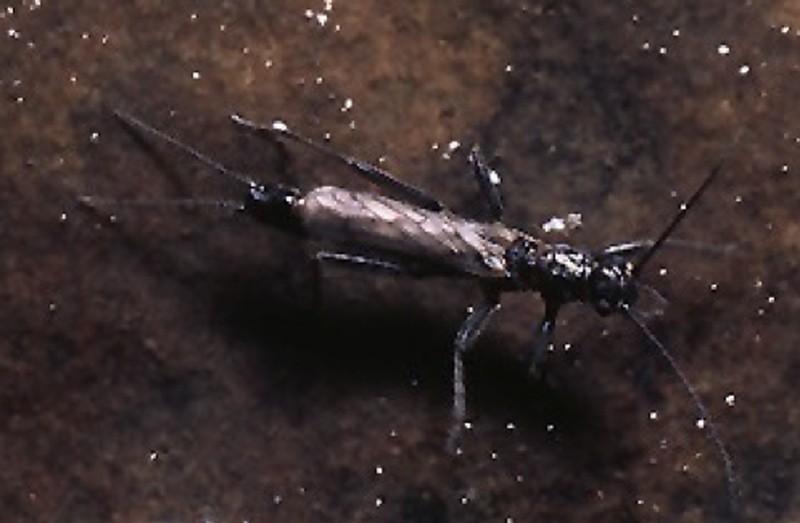 State Conservation Status Rank
SNR
Not Ranked - State conservation status not yet assessed.
Global Conservation Status Rank
G3
Vulnerable globally - At moderate risk of extinction due to rarity or other factors; typically 80 or fewer populations or locations in the world, few individuals, restricted range, few remaining acres (or miles of stream), and/or recent and widespread declines.

Illinois Stoneflies remain active in the winter because they produce a special protein that keep them from freezing in the cold.

Avoiding damming and flow alteration will help maintain favorable habitat for the Illinois Stonefly. Streams should be buffered to reduce agricultural and pesticide pollution. Reduction of road salt usage in transportation corridors near streams will benefit the conservation of this species (NYSDEC 2005).

Stoneflies require clean, fast flowing streams and rivers. Adults may be found climbing the trees during the winter and early spring months in the proximety of cold water streams.

Illinois stonefly larvae have two long filamentous cerci and have an elongated or flattened appearance. They also have long antennae, chewing mouthparts, gills on the abdominal segments, and pairs of thoracic wing pads. Adults are similar to the larvae except they have two pairs of wings folded over the abdomen and the gills are absent of vestigial (Hilsenhoff 1995).

Males of the Allocapina genus have varied and raised lobes on the dorsal abdominal segments (Frison 1929). Females are more difficult to distinguish.

Illinois Stoneflies feed on the leaf litter and detritus that falls into the streams, especially in the fall.

The Illinois Stonefly lives most of its life within the stream, around one to two years, and emerge as an adult in January thru April. Eggs are laid in the stream in the colder winter months, larvae hatch and feed on the allochthonous detritus found along the stream bottom. Allocapnia are univoltine, which means that they produce only one brood per season. During the spring and summer the larvae remain in diapause, a form of hibernation, in the
substrate of the stream (Hilsenhoff 1995).

The time of year you would expect to find Illinois Stonefly present, active, and larvae present and active in New York.

This guide was authored by: Lutz, Colleen M.

Information for this guide was last updated on: June 23, 2022