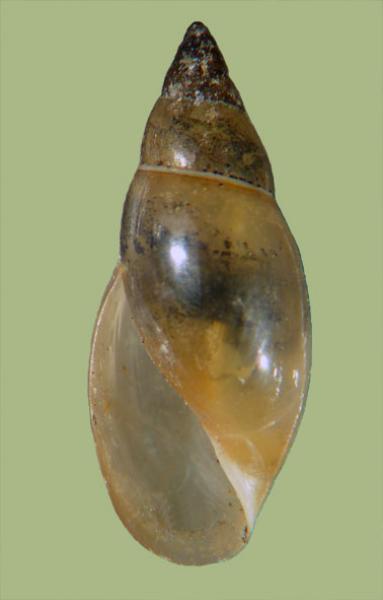 Some freshwater snails can survive the passage through the digestive sytem of birds and fish.

This small freshwater snail has mysteriously and precipitously declined throughout the state and elsewhere over the past 100+ years. As a tempoary pond specialist, it is susceptible to changes in hydrology and habitat destruction as these habitats receive no formal protection in New York. The overall range of this boreal species is clearly retreating northward toward Canada suggesting that a warming climate is having adverse effects on its life history strategy in the mid latitudes. The S2 ranking could be revised in light of any potential future survey efforts confirming its status.

There is virtually no information on the status of this species since surveys in the lower Hudson watershed (Strayer 1987) and statewide (Jokinen 1992) showed a drastic reduction in occupancy throughout the 1900s.

At least 20 widely scattered site records were known from the mid 1800s to the 1970s across the state. Robertson and Blakeslee (1948) reported it at seven different locales in the Niagara Frontier region alone, describing it as common and abundant. Likewise Harman and Berg (1971) reported it as common at 19 different locales in the Finger Lakes region, but none in the Susquehanna watershed. But by about 1990, only two extant occurrences were known throughout the state.

Because this snail occurs exclusively in temporary aquatic habitats, changes in the hydrological cycle (i.e., from climate change) could disrupt its life cycle because these mollusks depend on aestivation to survive pond drying and for overwintering. In addition, freshwater snails depend on high calcium concentrations for shell building, thus soil acidification could pose problems because this is a thin-shelled species. Dispersal among ponds (which is critical for these metapopulation-structured Gastropods) depends on the movements of other animals, especially birds, so a change in their populations could affect the snails. Because this species and its close relative, A. hypnorum (northern Europe), are in steep decline in other states, provinces and countries, some large scale factor, such as climate change seems most likely as the predominant threat. A recent assessment of freshwater Gastropods in North America (Johnson et al., 2013) revealed that 74% of the species are imperiled or already extinct and this group has the highest modern extinction rate yet recorded-- almost 10,000 times background rates. The top threats to the group as a whole are: highly restricted ranges (narrow endemics), habitat destruction (hydrological aleration= dams/channelization), and water pollution.

In New York, small temporary wetlands such as vernal pools currently receive no legal protection. Public and private landowners could implement forested buffers (300') around these wetlands in order to protect their functioning and connectivity to other pools within upland forest communities.

A basic inventory of woodland vernal pools in limestone regions would be a first step toward understanding whether and where this snail might still occur within the state.

This snail is a temporary woodland pond specialist (vernal pools) in areas with high calcium concentrations (i.e., over limestone bedrock). Nevertheless, it can sometimes turn up in other temporary wetland habitats that regularly dry up such as marshes, ditches, swales, intermittent streams, and less frequently in permanent water bodies (owing to their transport by water birds). In vernal pools these molluscs play an important role in energy flow because they serve as intermediate hosts for Trematodes (liver and blood flukes) that parasitize amphibians, and in turn they are parasitized by scyomyzid fly larvae. Likewise snails serve as food for a host of invertebrate predators, as well as amphibians and waterfowl, while facilitating nutrient cycling by consuming detritus (Colburn 2004).

This snail formerly occurred statewide. By the late 1960s, it no longer occurred in the Susquehanna watershed, and Jokinen (1992) only found it in two widely scattered locales, one near Plattsburgh and the other in the town of Wallkill. The current distribution in New York is unknown, but it may very well be extirpated from the state.

This is a boreal species, ranging coast to coast from Washington to New York (with a single outlier in south-central Pennsylvania), south to Colorado and north to Alaska. Many older historical records for this species reside in museums from as far south as Virginia, but it was not discovered in Connecticut in the late 1970s.

Recent studies of anatomy, allozyme frequency and mtDNA have confirmed that Aplexa is the most distinctive of the North American pondsnails (Physidae). In fact, Aplexa is the sister group to all other Physid species, suggesting that it is a very old genus (100s millions of years) (Wethington and Lydeard 2007).

The shell is elongate, thin, transparent, polished, and oily in appearance. It is light brown colored, up to 20 mm high with a long spire which is pointed and acute, 0.5 times the shell length.

The long, narrow sinistrial (coiled counter-clockwise when viewed from above) form, polished and blackish surface (when alive) and lack of mantle digitations serve to identify this species positively.

The animals overwinter as juveniles in the frozen soil, growing rapidly in the spring, then reproducing in the late summer or fall. This mollusk moves between suitable habitat patches solely through passive transport, primarily by birds. Physids are Hermaphroditic and generally lay large gelatinous egg masses during winter (Johnson et al., 2013). Juveniles mature rapidly and multiple generations can be produced in a single year (Colburn 2004). Species from northerly latitudes can usually live for two years or more.

This snail is a strict detritivore (eats decaying vegetation), often hanging upside-down on the water's surface grazing on materials floating on the water and plowing along through silty substrates (Harman and Berg 1971).

The activity window is short; this species aestivates in the soil to survive dry periods in summer when vernal pools dry up, and also during winter. In short-cycle vernal pools snails emerge from the sediments upon flooding, grow rapidly to maturation, reproduce, then juvenile members of the next generation burrow into the sediments to aestivate when the pool dries out in summer. In longer cycle pools a second generation may be produced (Colburn 2004). The critical elements for survival during aestivation are water retention and sufficient fuel reserves, thus the ability to survive the dry period could be related to shell size.

The time of year you would expect to find Lance Aplexa present, active, and reproducing in New York.

Bauer, B. and Ringeis, B. 2002. Changes in Gastropod assemblages in freshwater habitats in the vicinity of Basel (Switzerland) over 87 years. Hydrobiologia 279:1-10.

Kesler, D.H. 1983. Cellulase activity in Gastropods: should it be used in niche separation? Freshwater Invertebrate Biology 2:173-179.

Robertson, I. and C. Blakeslee. 1948. The Mollusca of the Niagara Frontier region. Bulletin of the Buffalo Society of Natural Sciences, 19: 1-191.

Turner, A.M. and S.L. Montgomery. 2009. Hydroperiod, predators and the distribution of physid snails across the freshwater habitat gradient. Freshwater Biology 54:1189-1201.

Information for this guide was last updated on: March 29, 2016