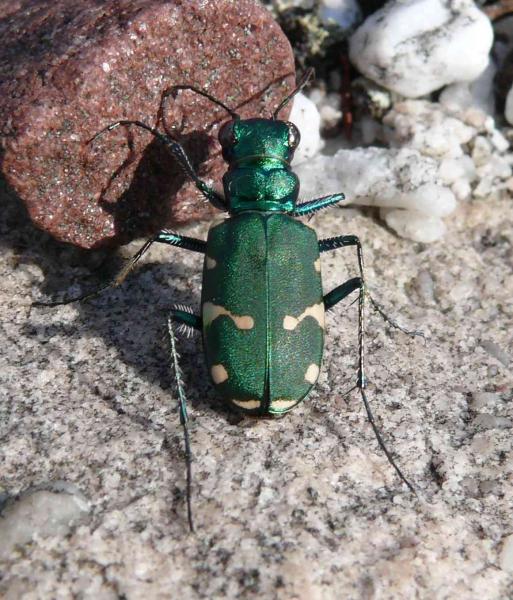 The northern barrens tiger beetle was rediscovered in New York in 2004, after decades of not being detected in the state. The species is known today in New York from a single occurrence in the Shawangunk Mountains in Ulster County. Likely causes for its decline include destruction of its pine barrens habitat and suppression of natural disturbances such as fire that create and maintain habitat openings.

Only one extant occurrence of the nominate subspecies is known from the Shawangunk Ridge in Ulster County.

Short-term trends are unknown. Cicindela patruela patruela was rediscovered in Ulster County only in 2004.

Cicindela patruela patruela was rediscovered in New York in 2004. Although this beetle has not been observed for decades in other reported localities, additional populations may be present elsewhere in the state.

Fire suppression and off-road vehicle use in pine barrens habitat are the two greatest threats to the persistence of nothern barrens tiger beetles. Since the one known occurrence is on protected land, proper management of that site for tiger beetles should allay both threats.

Research that would increase knowledge of threats to this tiger beetle, as well as helping define preferred habitat in order to guide future monitoring, restoration, and habitat protection efforts is needed. High-quality pine barrens areas on the Shawangunk Ridge should be the highest inventory priority. Nearby rocky summits with pitch pine are also a high priority. Historical locations should be searched, but specimens should be verified and additional location information sought. This tiger beetle is reported to like sandy areas with jack pine and there is a record from Burlington, Vermont (Leonard and Bell, 1999). Given this information, the Clinton County sandstone barrens also warrant searching.

In its single known occurrence, the species persists in rocky and sandy sites with pitch pine and scrub oak vegetation. Individuals are most frequently found in sandy or rocky openings and sometimes escape into low vegetation. These locations include natural openings as well as old roads and restoration sites.

Historical records for the nominate subspecies are from western New York (Conesus Lake), the lower Hudson area (Peekskill, West Point), Karner, and Crystal Lake (location unknown; there are many Crystal Lakes in New York). One extant occurrence is present on the Shawangunk Ridge in Ulster County.

Ranges from the upper midwest, east to the mid-Atlantic region, down through the Appalachian chain to North Carolina and north in disjunct populations into southern Ontario (Glaser 1984).

Like other tiger beetles in the northeast, the northern barrens tiger beetle is a small insect approximately 0.5 inches (12-14 mm) in length with long sickle-shaped mouthparts, long thin antennae with 11 segments, a long body form with head and eyes wider than the middle portion (thorax) of the body, long thin legs for running, and a pattern of white markings (maculations) on wing covers (elytra) located on top of the main portion of the body (abdomen). Like only a few northeastern species, the elytra of the northern barrens tiger beetle are metallic green; the maculations show as two spots and one middle band on each of the two elytra. As with other tiger beetles, the larvae live in burrows in the ground and are white and grublike in appearance. (Pearson et al. 2006, Leonard and Bell 1999)

The metallic green elytra and complete middle maculation are the most diagnostic characters for identifying the northern barrens tiger beetle (Pearson et al. 2006, Leonard and Bell 1999, Knisley and Schultz 1997).

All tiger beetles are best identified as adults. Far fewer good diagnostic characters are available for identifying larvae, many species lack formal or complete larval descriptions, and there is no comprehensive key for those larvae that have been described (Pearson et al. 2006).

Most adult tiger beetles are diurnal animals, spending the warmer parts of the day running along the surface of the ground hunting, eating, and mating. They pursue prey by running in short, fast spurts interspersed with brief stops. Northern barrens tiger beetles appear to be especially wary and will fly short distances into the more heavily vegetated portions of their habitat when they are flushed. Like most tiger beetles, they are most active on warm, sunny days and will retreat to burrows or hiding places at sunset or when skies become overcast.

Tiger beetles are predatory on other insects. Little is known about specific diet items of the northern barrens tiger beetle.

The time of year you would expect to find Northern Barrens Tiger Beetle reproducing and larvae present and active in New York. 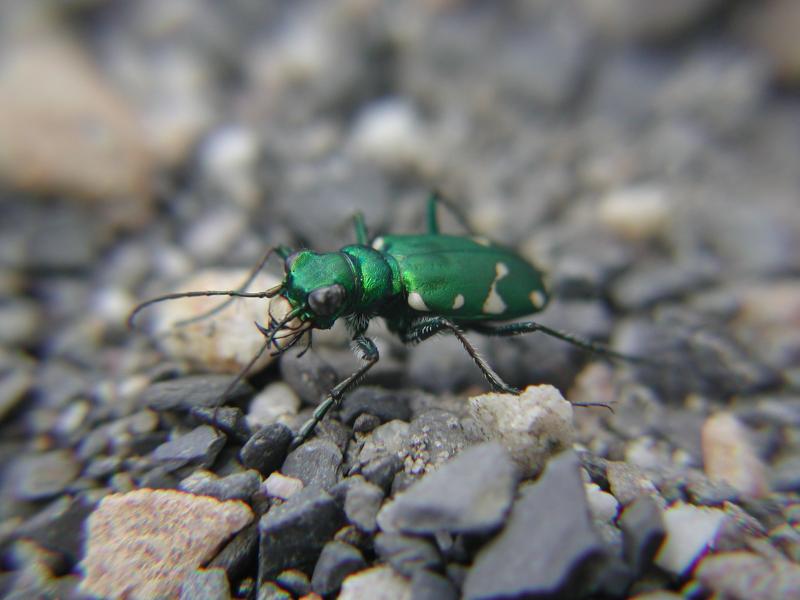 Information for this guide was last updated on: December 11, 2007