The metalmarks are a diverse family of butterflies that mainly occur in the tropics. The northern metalmark is the only species of this family that occurs in New York. Unlike almost all other butterflies, metalmarks often rest flat against the undersides of leaves with the upper surface visible. The metalmark's contrasting orange underside may serve to startle or confuse predators, similar to the colorful hindwings of underwing moths (genus Catocala).

This species has been recently recorded in Dutchess County in 2007 and 2013. The only other documented population statewide was based on collections in Orange County before 1866. The 2007 discovery was the first since the 1860s. This species is globally uncommon to rare and it is very rare in New York.

The long-term trends are unknown. The species has been reported at three locations in Dutchess County in 2007 and 2013, but has not been reported elsewhere in the state since the 1860s.

The main threats would be habitat loss to development, invasive plants, succession, and the isolation of the remaining colonies. It is not known whether the remaining populations are large enough to persist. Deer are also a potentially serious threat. While they do not severely graze the foliage of the foodplant, roundleaf ragwort (Packera [better known as Senecio] obovata), they do eat the flowers which could reduce the foodplant in the long term. Of most immediate concern though is the elimination of nectar sources by deer. This has been observed several times in potential, but unoccupied, habitats in New Jersey. Spongy moth spraying could also be a threat, but the potential sensitivity of larvae to Btk (Bacillus thuringiensis variety kurstaki - a bacterial biological control used on spongy moth caterpillars) is unknown.

Potential management needs include deer management, invasive plant and pest control, and habitat management and restoration. If deer browse is identified as a threat, there are a number of deer management techniques that can be employed. In small areas, tall fencing can prevent deer from browsing on plants. Exclosures should include roundleaf ragwort (Packaera obovata) and nectar sources. If deer browse is a significant issue, consultation with New York State Department of Environmental Conservation is recommended. Invasive species should be controlled to ensure the foodplant and nectar sources remain. Management techniques include mechanical removal, chemical treatment directly to the invasive plant, and some can be eliminated with biocontrols, such as parasites that specially target specific species. Mid to late larval instars of northern metalmark are present at the recommended spraying time of Btk for spongy moth. It is unknown how northern metalmark larvae are affected by Btk, therefore direct spraying is not recommended in areas with known northern metalmark populations. Habitat restoration could include selective logging to open the canopy which would result in suitable habitat for P. obovata and to provide some connectivity to other nearby populations when possible. It would be beneficial to plant nectar souces near P. obovata because northern metalmarks are weak fliers and tend to stay near their foodplant unless there is a shortage of nectar.

Research is needed to determine the affects of Btk (Bacillus thuringiensis variety kurstaki) on northern metalmark larvae. Additional studies are needed to better understand metapopulation dynamics and how selective logging may improve connectivity between subpopulations.

The habitat in New York appears to be openings in wooded limestone ridges with the foodplant roundleaf ragwort (Packaera obovata), but the details are limited. The adults are said to also occur in nearby wetlands as they do in New Jersey. The typical habitats in states adjacent to New York include both natural openings on cliffs, ledges, or very rocky soil and also powerlines. The presence of nectar flowers in July is likely to be crucial and adults that are seen in wetlands may be there in search of nectar.

This species was recently discovered at three locations in Dutchess County. Another known location in New York is from a collection(s) in the 1860s from which the species was first described near Upper Coldenham in Orange County. There is also a record that the species was first discovered along the Delaware River on calcareous ledges (Forbes 1960), however, this may refer to the Upper Coldenham site or possibly south of New York. There appear to have been no other records (Shapiro 1974). This species is not likely to occur much more widely, but more colonies might turn up in the limestone areas of southeastern New York, especially near the New Jersey border. New York and two adjacent Connecticut counties are the northeastern end of the range.

There are three major population clusters: northwest Connecticut to northwestern New Jersey (extant in Sussex and Warren counties) and Dutchess County in New York; Appalachia from central Pennsylvania through West Virginia then northwest into Ohio-Indiana; Ozark region mainly in Missouri, but Opler (1992) shows range extending into Arkansas and Oklahoma. Published information suggests Ohio may be a stronghold. Records in Shapiro (1966; repeated in most subsequent literature) for southeastern Pennsylvania serpentine barrens are mostly dubious, although a voucher does exist to support the Lima record. Several significant efforts have been made to relocate this species in these barrens with no success.

Northern metalmark is a small butterfly 2.9-3-2 cm (1.125 – 1.25 in). Males have a rounded forewing while females have a squared forewing. The upper side of northern metalmark wings are chestnut brown with a pattern of dark median bands. The outer margin has two thin, metallic silver bands with a band of dark spots between them. There is a whitish outer fringe. The underside of the wings is orange with altering black and metallic silver markings. The adult is unmistakable in New York, but is very similar to several species belonging to the same genus occuring in other states. The caterpillar is green with black dots and long white hairs. The larva is similar to the Little Metalmark (Calephelis virginiensis), illustrated by Wagner (2005), but it would occur on or under the foodplant, roundleaf ragwort (Packera obovata). There are numerous other hairy white caterpillars, but the details for Northern Metalmark differ substantially and an experienced Lepidopterist could confirm a mature larva to genus based on Wagner's (2005) illustration and text. In New York, the genus identification of a larva along with the foodplant would confirm the species.

Note the metallic silver markings on the top of the wings and the orange underside. There are no similar species in New York. The illustration of the larva and the adult in Wagner (2005) of the related Calephelis virginiensis would suffice to recognize northern metalmark in and near New York.

Identification will usually be as an adult, but larvae or photos of them can be identified by an experienced Lepidopterist. The larva would be on or under the foodplant, roundleaf ragwort, however, there are other hairy white caterpillars that use the same plant.

Adults perch on underside of leaves of shrubs or small trees. They are most often seen perched in sunny spots or on flowers. They will move short distances from their main habitats to obtain nectar and perhaps for other reasons.

The larvae eat the leaves of roundleaf ragwort (Packera obovata). The adults take nectar from a variety of flowers.

In New York, this species has a flight period of about three weeks beginning in late June or July.

The time of year you would expect to find Northern Metalmark present, reproducing, larvae present and active, and pupae or prepupae present in New York. 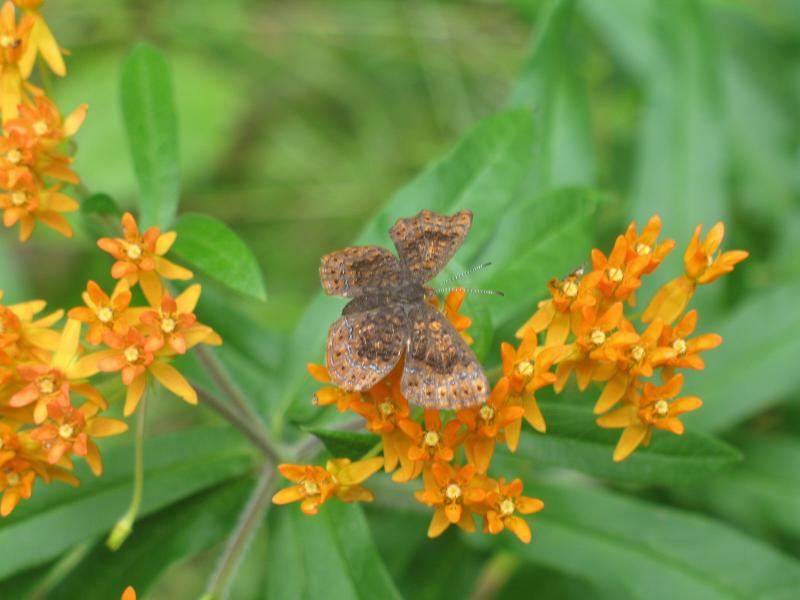 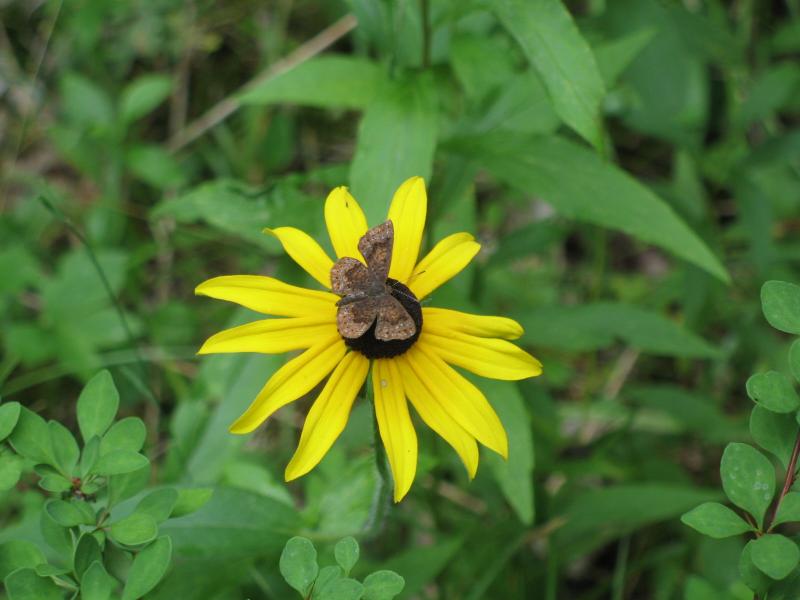 This guide was authored by: Dale Schweitzer and Hollie Y. Shaw