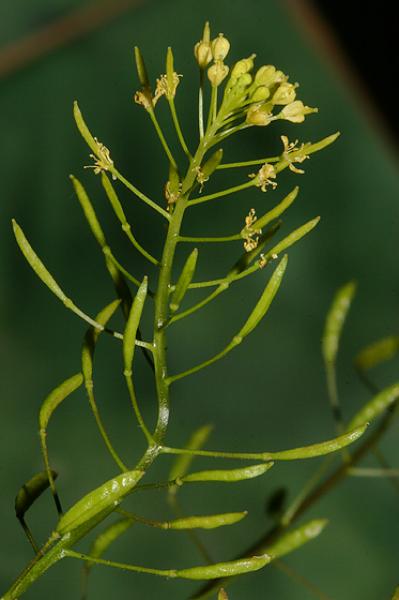 The genus is named for 18th century French botanist and physician/pharmacist Francois Descourain (1658-1740) (Botanary). The species name means short fruit but this variety has fruit that averages two millimeters LONGER than the species (7 vs. 9 mm) (Gleason and Cronquist 1981).

The short term trend appears to be a siginifcant decline as one of the two populations considered extant could not be relocated during a resurvey. The other population has not be resurveyed since the 1980's so its trend can not be evaluated.

The long term trend can not be known for certain but indicates a sharp decline with perhaps only one of the original seven populations remaining extant. A lack of resurveys of historical sites leaves the status of this plant in question.

Mowing during the growing season to maintain a lawn may eliminate one population.

This species is disturbance adapted and needs well-lit sites. Monitor sites and control the spread of invasive exotic and non-native plants that may out compete this plant. Control of native species especially those generating shade may be needed if the vigor of populations appear to be in decline. Any management should ensure that the plants can complete the annual reproductive cycle without physical disruption.

Given that is species is an herbaceous, annual studies are need to understand its presence and persistence in the seed bank.

In New York, this species has been found in a variety of thin soiled or disturbed settings including along railroad tracks, in an open weedy meadow, on disturbed sites and bare soil near limestone or rocks, on limestone on both a low island and an open wood. Habitats are generally calcareous. (New York Natural Heritage Program 2015). Ballast and waste ground (Rhoads and Block 2000). Dry. open, or sparsely wooded places (Gleason and Cronquist 1991). Roadsides, railroads, fields, and gravel pits; also on disturbed shores and in open rocky (calcareous) woods (Voss 1985). Dry sandy or rocky soils (Fernald 1970).

In New York, Descurainia pinnata ssp. brachycarpa has been found in northern New York along the shores of Lake Champlain, central New York near Ithaca, and western New York near Buffalo. New York is at southeast edge of the range.

Descurainia pinnata ssp. brachycarpa is primarily a northern species with a divided range. It occurs from Quebec and Maine south to New Jersey and New York and west to British Columbia; from Ohio, West Virginia, and North Carolina west to Arkansas, Missouri, Wyoming, Montana, Oregon, and Washington; and south from Wyoming to New Mexico (Natureserve 2015).

Descurainia pinnata ssp. brachycarpa is an erect, herbaceous annual with stems growing up to 70 cm tall. It is typically single-stemmed but sometimes branches at the base or above. Leaves and stems are moderately to densely pubescent with tree-like (dendritically) branched or simple bristlelike outgrowths (trichomes) but are not hoary (canescent). Stem leaves are alternate, dark green, egg-shaped (ovate) to lanceolate, or lanceolate with their tapered end at the base (oblanceolate), and 1 to 10 cm long and may be simply pinnate, bipinnate or the lower ones again pinnatifid. They are sessile to short stalked (petiolate), the upper blades are smaller and upper lobes often narrower. The basal leaves usually wither by flowering. The flowers are borne separately on short equal stalks along the stem (raceme) and it elongated as it matures. Axes of the raceme have stalked glands. The flowers have yellow sepals that are oblong, 0.8 to 2.6 mm, pubescent spreading to ascending . The petals are whitish or yellow, narrowly lanceolate with the tapered end at the bottom (oblanceolate) and 1 to 3 mm long by 0.3 to 1mm wide. The stalks bearing the fruit (pedicels) are usually ascending to widely spreading (divaricate), (7-) 10 to 18 (-23) mm long and forming 20-60(-80)º angles. The fruit (siliques) are club-shaped (clavate), broadly linear, elongated 4 to 13 (-17) mm long by 1.2 to 2.2 mm wide, dry and split at maturity (dehiscent) leaving a central partition. The seeds number 5 to 10 arranged in two rows (biseriate) in each of the two cavities (locules). (FNA 2010).

For positive identification the entire plant with leaves and either mature fruits or flowers is needed.

There are two other Descurainia taxa in New York. Descurainia sophia is a weedy species covered with eglanduar stellate hairs, giving the plant a white appearance. Descurainia pinnata ssp. pinnata is a non-native plant located mainly along the Coastal Plain. It has eglandular hairs densely covering the herbage, but it may have glandular hairs scattered in the inflorescence. It has rose colered sepals (at least on the tip), smaller sepals and petals 0.8 to 2mm and 1 to 1.8 mm respectively than D pinnata ssp. brachycarpa whose sepals are yellow, 1.5 to 2.6 mm with petals (1.7-)2 to 3 mm.

Northern tansy-mustard flowers late May to mid-June with fruits persisting until early September.

The time of year you would expect to find Northern Tansy Mustard flowering and fruiting in New York.