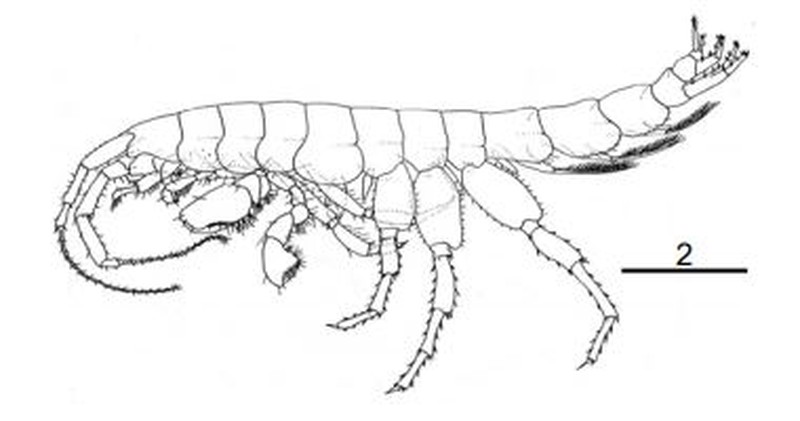 The Piedmont Groundwater Amphipod is a cave and groundwater dwelling crustacean. To adapt to this dark, underground habitat they are unpigmented, have attenuated bodies, and are eyeless (Culver 2012).

The Piedmont Groundwater Amphipod is one of only two naturally occurring amphipods in New England. This species is limited to karst geology, therefore it may be found in areas with caves, fissures, springs, and seeps (areas where groundwater come to the surface of the soil). The habitat that this species occupies is very susceptible to surface water contamination. It is not uncommon for pollutants, such as liquid manure or volatile organic compounds to permeate these areas through the small fissures. Surface contamination to groundwater can come from distance sources quite quickly during accidental spills and rainwater runoff (www.sciencebase.gov).

Little is known about the life history of the Piedmont Groundwater Amphipod. More research should be conducted to understand the phenology and reproduction of the species.

This species is commonly found in groundwater habitats such as wells, caves, seeps and springs.

This species is regionally endemic and has been historically known from southeastern New York. There is a large disjunction in the range between New York and Maryland.

The Piedmont Groundwater Amphipod is a flat shrimp-like animal with no eyes and lack of color. Males reach about 12 mm in length and females reach 9.7 mm in length. They have well developed tactile structures such as antennae and setae. Sexual dimorphism in the Piedmont Groundwater Amphipod is marked by the enlarged second antenna of the male (Holsinger 1967).

It is very difficult to distinguish between different species of groundwater amphipods without a knowledge of the morphological characteristics of animal . Species can be distinguished by the adult body length and the characteristics of the appendages of the thoracic segments, called gnathopods. The gnathopod is a claw on the second thoracic segment of the amphipod used by males to grasp females during copulation. The tenuis group, which includes the Piedmont Groundwater Amphipod, is lacking the prominent distal notch on the palm of propodus of the first gnathopod (Fitzpatrick 1983).

This crustacean feeds primarily on detritus, however there is some evidence that clay may be important to their diet (Ginet and Decu 1977).

Little is known about the life history of this species, Adults are present year round (Smith 1986).

The time of year you would expect to find Piedmont Groundwater Amphipod present in New York.

This guide was authored by: Lutz, Colleen M.

Information for this guide was last updated on: June 30, 2020