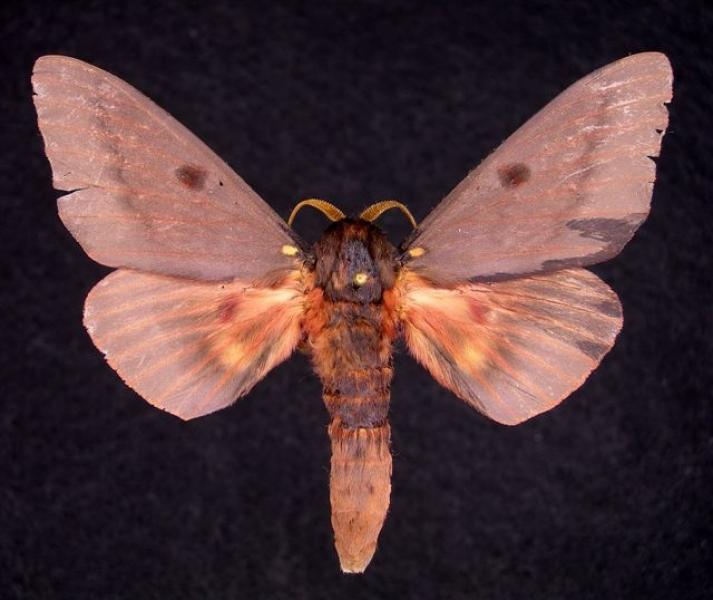 The Pine Devil derives its name from the presence of large "horns" on the caterpillar. The caterpillar feeds on pines.

The Pine Devil was last documented in New York State in 1984, as pupae collected from Montauk, Long Island. It is unknown whether it still exists in New York State. The species was eradicated from New England (approximately 5% or more of its range), likely due to the introduced parasitoid fly Compsilura concinnata. Currently, the Pine Devil is thought to be extirpated or very rare north of Pennsylvania and New Jersey (Maier et al. 2004). Additional surveys are needed to better understand its status and distribution in the state.

The short-term trend for the Pine Devil in New York State indicates that the population is declining. In recent decades, the species has only been documented at one location, at which it was last seen in 1984.

The long-term trend for the Pine Devil in New York State indicates that the population is declining. The species used to occur in southeastern New York State, but now seems to be extirpated from the area (NatureServe 2010).

The Pine Devil has been eradicated from New England, representing approximately 5% or more of its range, almost certainly due to an out-of-control generalist parasitoid, the tachinid fly Compsilura concinnata (NatureServe 2010). The parasitoid was introduced from Europe to control outbreaks of the spongy moth (Lymantria dispar) (Webber and Schaffner 1926); however it also greatly reduced populations of other moth species (Boettner et al. 2000). Currently the parasitoid is established in much of the eastern United States. It has had minimal impacts on native butterflies and moths in some places (e.g., southern New Jersey), but it has greatly reduced or wiped out many species of large summer moths in other areas (e.g., southern New England). Some butterfly and moth species are recovering in some places, and others are persisting in very low numbers. Moths in the genera Citheronia and Eacles appear to be the most vulnerable to eradication. In addition to the parasitoid, massive DDT spraying of northeastern forests in the 1950s and 1960s also contributed to the eradication of the Pine Devil from New England. Elimination and fragmentation of habitat by commercial and residential development are also threats. It is likely that moths in the genus Citheronia are vulnerable to extreme light pollution in large cities, but these moths can do well in areas with normal suburban and rural lighting (NatureServe 2010).

The management needs for the Pine Devil in New York State are uncertain. In general, suitable pine forest habitat should be maintained.

Additional inventory and monitoring is needed to determine if the Pine Devil still exists in New York State. Currently, the species is thought to be extirpated or very rare north of Pennsylvania and New Jersey (Maier et al. 2004). The species can be sought during its flight season at light traps left in habitats that contain the larval foodplants, pines (Pinus spp.). In the Northeast, before the species became extirpated from the area, adults were captured in early-mid July (NatureServe 2010). In the Mid-Atlantic states and Appalachia, adults have been captured from mid-June to late July (Tuskes et al. 1996). Research is needed to better understand the factors behind the major regional differences in the impacts of the parasitoid fly Compsilura concinnata, in order to determine whether the Pine Devil is unthreatened in much of its range outside of New England, as now appears to be the case, or whether it is at high risk of imminent massive reduction (NatureServe 2010).

The Pine Devil has been documented in Suffolk County, Long Island.

The global distribution of the Pine Devil has been reduced by approximately 5% or more. The range once included northern Pennsylvania and extended north well into Maine, at least to Oxford and Brunswick. Currently, however, the range seems to be restricted mostly to the Appalachians and the coastal plain from the New Jersey Pine Barrens and south-central Pennsylvania through most of Florida, west into southern Ohio, south through eastern Kentucky to the Gulf states, then as far west as southeastern Louisiana. It is unclear if the Pine Devil is widespread through the Southern Piedmont or not (NatureServe 2010).

The Pine Devil is a robust moth with dull, brownish-violet forewings. On the forewings, the basal spot is rose and small, the postmedial line is blackish and indistinct, and the reniform spot is blackish. The hind wings have a rose base, and the median line and discal spot are blackish. The veins on the forewings and hind wings have a faint rose outline. The wingspan is approximately 70-100 mm (Covell 1984). Eggs are translucent, and embryos developing inside are visible. Larvae are brown or grayish, with small black and brown markings. They have long dorsal "horns" on thoracic segments and shorter spines on abdominal segments. Larvae can reach a maximum of 110 mm (Tuskes et al. 1996). No other caterpillars on pines look like this species (Maier et al. 2004). Pupae are smooth and elongate (Tuskes et al. 1996).

In the Northeast, the Pine Devil usually has one annual generation. Adults emerge from the pupal stage on June or July mornings. Males are active the evening after they emerge. Females release pheromones from the late evening until the early morning (10 pm - 2 am). Mated pairs stay together until the following night, when the female begins laying her eggs. Eggs are laid in groups of 1-3 at the base of pine needles. Eggs hatch in 7-10 days. Larvae undergo five stages (instars) and feed singly during all stages. Pupae overwinter in a cavity underground (Tuskes et al. 1996).

The best time to see the Pine Devil is during its flight season. In the Northeast, before it became extirpated from the area, adults were captured in early-mid July (NatureServe 2010). In the Mid-Atlantic states and Appalachia, adults have been captured from mid-June to late July (Tuskes et al. 1996). In Pennsylvania, the moths seem to mostly fly in June. In southern New Jersey and probably the Delaware-Maryland-Virginia region, there is a bimodal first brood with a peak in very late May to mid-June, depending on the spring, and another peak approximately 3-4 weeks after the first (NatureServe 2010).

The time of year you would expect to find Pine Devil reproducing in New York.