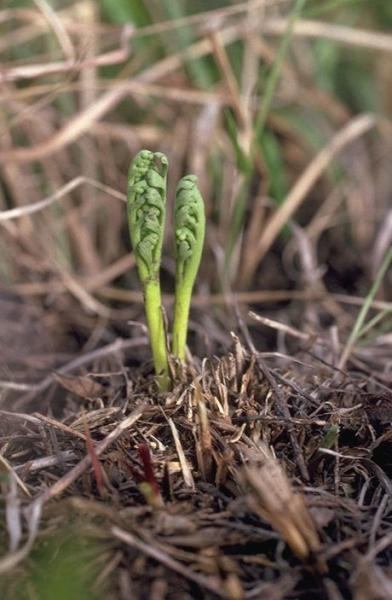 State Conservation Status Rank
SH
Historical (Possibly extirpated) in New York - Missing from New York; known only from historical records (more than 30 years ago), but still some possibility of rediscovery upon further searching.
Global Conservation Status Rank
G3G4
Vulnerable globally, or Apparently Secure - At moderate risk of extinction, with relatively few populations or locations in the world, few individuals, and/or restricted range; or uncommon but not rare globally; may be rare in some parts of its range; possibly some cause for long-term concern due to declines or other factors. More information is needed to assign either G3 or G4.

Prairie dunewort was recognized as a separate species in 1986 after different-looking moonworts were discovered in Iowa prairies and sand dunes along Lake Michigan. They were overlooked before because they are so small and hard to see among grasses, come up very early in the spring, and are gone before the end of June. After examination of more specimens from around the country it was discovered that this species was also collected in Jamesville, NY, the easternmost population.

There is one historical location in Onondaga County.

As a fern reported only from a single county and not seen in many years, a trend assessment would be very difficult and offer little information.

The primary threat to Botrychium campestre, if the plant still exists in the state, is the loss of its open habitats to successional overgrowth and development.

This fern has only been reported from a single location within Onondaga County.

Botrychium campestre ranges from New York (historical) and New Brunswick west to Washington and Oregon in the U.S. and Alberta in Canada (Kartesz 1999). It ranges as far south as northeastern Colorado. Despite this wide range, populations appear to be concentrated in the upper Great Lakes region as well as western Minnesota and western Iowa to the Dakotas (Higman and Penskar 1999, Canadian Biodiversity Website 2002), with only a few widely separated occurrences elsewhere.

Prairie dunewort is a very small, perennial fern with a single aboveground frond. The frond is usually only about 2 inches long and can be seen through mid-summer. It is divided into two leaves above a common stalk. The sterile leaf is very fleshy and whitish blue-green. It has five, sometimes up to nine, usually well separated pairs of upswept leaflets (pinnae). The pinnae are variable but generally very narrowly fan-shaped. The top edges of larger pinnules are usually notched into two or several segments and have small rounded or sharp teeth. The fertile leaf is the same length or slightly longer than the sterile leaf with fleshy, somewhat flattened branches that bear grape-like sporangia. Spores germinate underground and develop into tiny, non-photosynthetic gametophytes which depend on a fungus for nourishment.

Prairie dunewort is a very small, perennial fern with a single aboveground frond which can grow to 4 cm tall and is visible only in the spring. The sterile leaf is glaucescent, thick, and fleshy. Pinnae occur in 5 (-9) pairs, are spreading and usually remote. Pinnae are variable, mostly linear to linear-spatulate, undivided to the tip, margins are crenulate to dentate, usually notched or cleft into two to several segments, the apex is rounded to acute, venation is like the ribs of a fan without the midrib. The fertile leaf is 1-pinnate, 1-1.5 times the length of the sterile leaf.

This fern is best identified when the vegetative and fruiting leaves are fully formed in late spring.

Botrychium campestre is most easily confused with Botrychium minganense, Botrychium lunaria, and Botrychium simplex. The pinnae of Botrychium lunaria are broader, more fan-shaped, and overlap. Botrychium minganense has a longer and less branched fertile leaf and the pinnae of the sterile leaf are not divided at the top. It's leaves can only be seen into mid to late summer. In Botrychium simplex the upper pinnules are somewhat fused together and not separate. The fertile leaf often arises from near the ground level. Botrychium matricariifolium pinnules are long and narrow with a central midrib and secondary segments. Reliable field determination of moonworts depends on the careful use of technical keys and comparison with silhouette outlines of verified specimens. Identification can be complicated because there is often a high degree of morphological variability between individuals in a population and between populations of the same species. Several species may grow together at the same site, and the few diagnostic characters may not be apparent in small plants. Botrychium campestre usually folds up and shrinks upon drying and is very difficult to identify in this condition. A photograph of the living fern should be taken if the identification is to be confirmed at a later time.

Mature fronds of this plant are visible in May and early June. Surveys should be conducted at this time of year.

The time of year you would expect to find Prairie Dunewort vegetative and fruiting in New York.