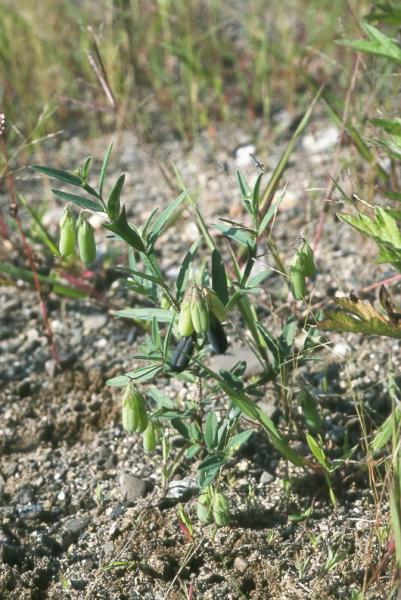 The common name rattlebox comes from the genus name, which is derived from the Greek word "crotalon" meaning rattle (the genus for rattlesnake is Crotalus). When the fruits mature they become hardened and the seeds rattle around inside. The species is widespread in eastern United States and can be weedy. It is on the list of noxious weeds for Arkansas and even though there is plenty of weedy habitat in New York we are the northeastern edge of its range and there is some environmental factor limiting its spread.

Two large populations exist along with one small population. All are threatened by succession or habitat destruction. About 15 historical records exist but none have been relocated.

Five populations have been found since the 1980s but two of these have been lost to habitat destruction or succession. The other three populations seem stable.

The long-term trend has declined over the past 100 years even though this plant was never very common in the state. There were about 15 historical localities from the early 20th century and none have been relocated. About half of these could be considered extirpated.

This species thrives in low nutrient disturbed areas and there is a natural threat from succession by other plants that can outcompete it if the areas are not kept open. Habitat destruction is also a threat when these open areas are converted to more permanent structures.

The open habitat needs to be maintained while avoiding the direct destruction of plants.

Rattlebox grows in open natural or human disturbed areas which are plentiful throughout the state but it is unknown why it prefers only a small part of that habitat. Research is needed to understand this habitat preference. We need to know if this plant persists as a seed bank and if populations can be augmented by specific management practices.

Rattlebox is a weedy species, known in New York from a a variety of open disturbed sites with sandy soils, including pine plantations, pastures, and mowed fields. At these sites it is associated with little blue-stem (Schicachyrium scoparium), other grasses, and a diversity of weedy species (New York Natural Heritage Program 2007). Dry sandy or gravelly soil (Fernald 1970). Dry open soil and waste land, usually as a weed in our range and probably only introduced except along our southern border (Gleason & Cronquist 1991).

In New York this species is found in the Lower Hudson Valley and Long Island, ranging as far north as Orange County.

This weedy species is found from New Hampshire throughout the eastern and southern states, to as far west as Arizona on the southern and Minnesota on the northern edges of its range. Within this range it is extirpated in both New Hampshire and West Virginia; Michigan populations are considered to be introduced rather than native.

Rattlebox is an annual, herbaceous, leguminous weed. It has an erect, hairy stem 10 to 40cm tall, with conspicuous stipules persisting along the upper stem. The leaves are alternate, sessile, pubescent, and lanceolate to linear, and 3 to 8 cm long. The flowers have a hairy, pale green calyx enclosing a pale yellow, two-lipped corolla. The distinctive fruits are very inflated, pendant legumes.

This is the only Crotalaria species native to New York (the introduced Crotalaria rotundifolia has been collected only from Orange County, and has spreading stems and reduced stipules). The fruits are an easy way to identify this plant, since their inflated structure is unique and should should not be confused with other species.

Rattlebox flowers from July through September, and the fruits persist through November.

The time of year you would expect to find Common Rattlebox vegetative, flowering, and fruiting in New York. 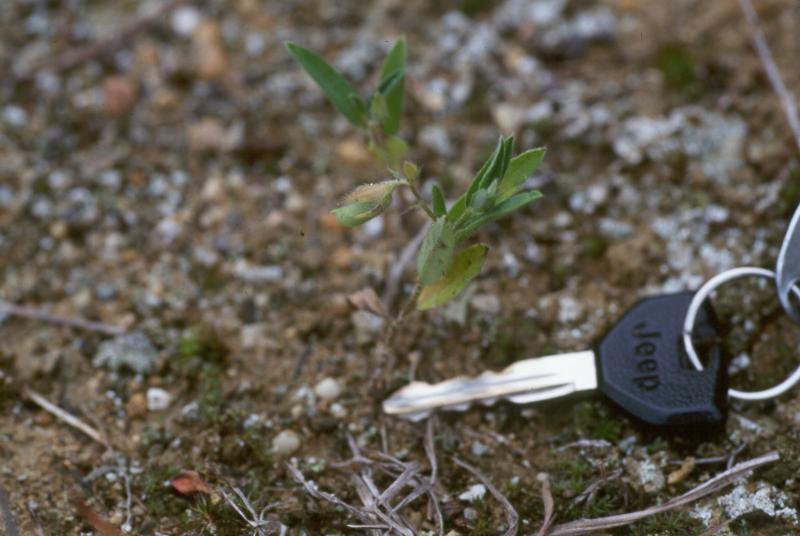