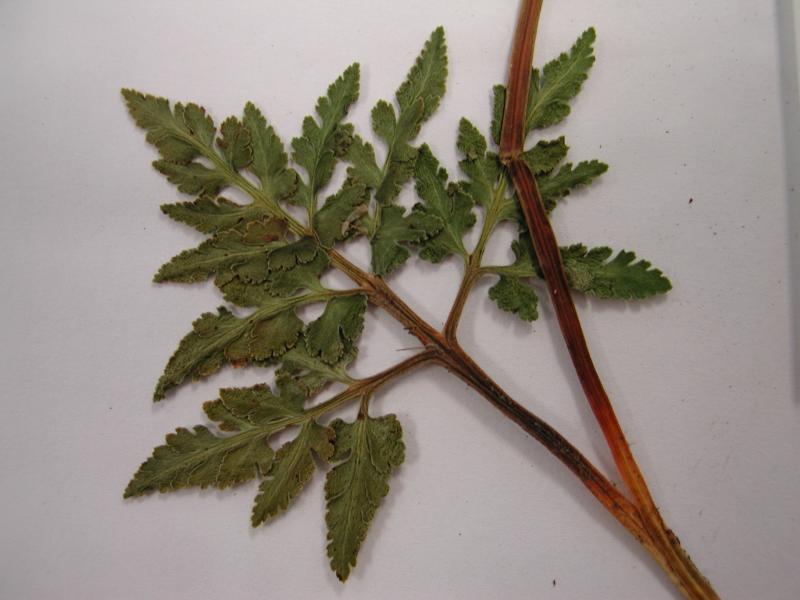 This fern often occurs in the company of other similar-looking grapeferns. If many individuals are seen in one population they must be carefully examined to identify separate species. The species name comes from the Latin "ruga", meaning wrinkled, and refers to the wrinkled surface of the leaf.

There are two existing populations with only one to a few plants in each population. There are eight historical populations but none of them has been seen since the late 1940s.

It is very difficult to ascertain a short-term trend since populations are small and plants do not appear every year.

This fern was never common in the state but changes in agricultural use and habitat development have probably resulted in a decrease in populations. None of the historical populations have been rediscovered and only two new populations are known.

This fern appears to be stimulated by grazing so changes in grazing patterns and subsequent succession could threaten populations. Suburban development south of Oneida Lake has reduced available habitat.

Grazing and other disturbance patterns need to be maintained around existing populations to prevent succession from changing the open habitat that this fern requires.

Long-term demographic studies need to be undertaken on existing populations to better understand trends and variation.

This fern is limited to the St. Lawrence Seaway and Great Lakes regions. This range extends from northern Vermont and southern Quebec through northern New York, southern Ontario, much of Michigan, northern Wisconsin, and northeastern Minnesota. Reports from Connecticut are likely erronous.

Rugulose grape fern is a perennial, evergreen fern. The common leaf stem of the fertile and sterile segments is up to 6 inches long while the leaf stem of the more erect fertile segment can be up to 9 inches long. This spore-bearing portion of the leaf can be up to 5 1/2 inches long. The leaf stem of the sterile leaf can be up to 3 inches long. The sterile leaf blade appears in the middle of May, is green, and grows up to 6 inches long and 10 inches wide. It is divided into two or three broadly triangular leaflets (pinnae). The terminal pinna blade is egg shaped to triangular in outline and the same size as the lateral pinnae. The pinnae are again divided into pinnules which are divided into segments. The terminal pinna are divided into progressively smaller segments up to the tips. The ultimate segments of the pinnules are angular trowel shaped to spoon shaped. The edges have somewhat rounded, wide teeth The upper surface of the leaf is convex and wrinkled when alive. The leaves remain green throughout the winter where they are exposed.

This can be a difficult to identify fern. With only a few individuals typically present, we do not want to encourage collection. Instead, to obtain verification of the identity, please take a few photographs of the plant and collect just a portion of the leaf frond.

In Botrychium dissectum and Botrychium oneidense the terminal pinna is larger than the lateral pinnae. The pinnules of the terminal pinna are more or less undivided at the tips and are flat and smooth. Botrychium oneidense is usually only found in low shaded forests and swamps where Botrychium rugulosum is found in open habitats. The long stalked pinnae and rather large space between the basal pair of pinnae and the upper pairs will distinguish this species from B. lunarioides and B. multifidum. Botrychium multifidum has pinnules that are rounded, larger and mostly 4-8 mm wide. The leaf surface is flat and without wrinkles. The edges of the ultimate segments of the pinnules have rounded teeth or are smooth. New leaves appear in early May. Botrychium rugulosum closely resembles its Asiatic counterpart, B. ternatum, to such an extent that they were considered the same species until 1982, when Wagner and Wagner (1982) determined that true B. ternatum did not occur in North America.

Leaves for this fern emerge mid-May and fruit develops mid-August through September. This fern can be identified vegetatively, so surveys may be conducted at any point during the growing season.

The time of year you would expect to find Rugulose Grape Fern vegetative and fruiting in New York. 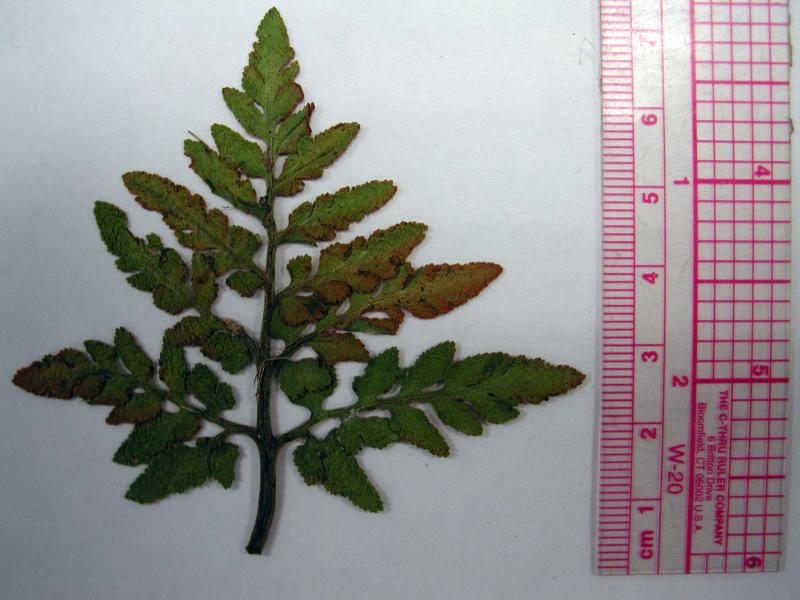 Information for this guide was last updated on: April 18, 2006