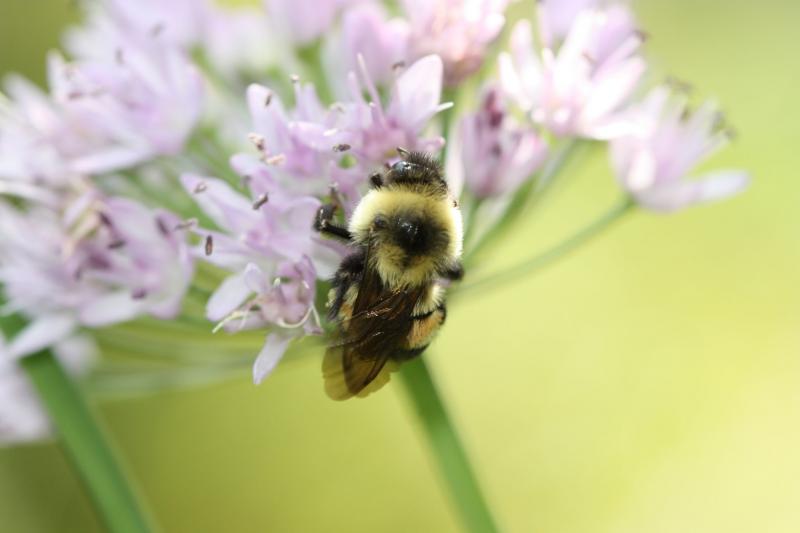 State Conservation Status Rank
SH
Historical (Possibly extirpated) in New York - Missing from New York; known only from historical records (more than 30 years ago), but still some possibility of rediscovery upon further searching.
Global Conservation Status Rank
G2
Imperiled globally - At high risk of extinction due to rarity or other factors; typically 20 or fewer populations or locations in the world, very few individuals, very restricted range, few remaining acres (or miles of stream), and/or steep declines.

Not all rusty-patched bumble bees have a rusty-brown patch of hair on their abdomen. Workers and males have this coloration, but queens do not (Evans et al. 2008). See the Identification Comments for more details.

Rusty-patched bumble bee (Bombus affinis) has been ranked state historical (SH) as the last known record for New York is from 1999 and the species has not persisted in neighboring states, suffering catostrophic decline throughout its range in recent years. While the definitive cause for its decline is unknown, bumble bee experts and scientists strongly suspect exotic pathogens such as Nosema bombi that have been introduced into wild populations (Cameron et al. 2011) and neonicotinoid pesticides (Colla and Taylor-Pindar 2011).

There has been no known record of rusty-patched bumble bees in New York after the year 2000 (Richardson 2013 and Yanega 2013). When comparing data from the last 15 years to the decades prior, there is a 100% decline of this species and it is currently ranked state historical.

The primary threat to species in the subgenus Bombus leading to their rapid, recent decline has been attributed to exotic pathogens. Cameron et al. (2011) showed a higher proportion of B. affinis individuals infected by the pathogen Nosema bombi than other bumble bees with stable global populations. In addition, insecticides, habitat loss and fragmentation, are known long-term threats for many bumble bees and research is needed to determine the impact of climate change and the introduction of non-native hymenoptera (Colla and Taylor-Pindar 2011, Schweitzer et al. 2012).

Bumble bees are generalist foragers and need nesting habitat in the spring, flowers for adult and larval nutrition throughout the spring and summer, and sites for queens to overwinter. Rusty-patched bumble bees are underground nesters and will use abandoned rodent burrows, hollow tree stumps, and fallen dead wood (Colla and Taylor-Pindar 2011). Foraging habitat should include flower abundance and species richness with overlapping blooms to ensure nectar availability throughout the growing season (Schweitzer et al. 2012). Select food plants for B. affinis include sunflowers, asters, goldenrods, Vaccinium, Prunus, and Aesculus (Colla et al. 2011). Suitable sites for bumble bees to overwinter may include rotting logs, mulch, or loose soil (Schweitzer et al. 2012).

The rusty-patched bumble bee has not been confirmed in New York since 1999. Due to this and its rapid, recent decline throughout much of its range, its current status in New York is state historical (SH).

The historic range for rusty-patched bumble bee includes Maine westward to Minnesota including southern Canada and southward in the United States to North Carolina and Tennessee. The current range for this species is undetermined, as due to its rapid, recent decline, records pre-2006 may now be considered historical. The probable extant core area appears to be centered around Illinois, Wisconsin, Minnesota, and Ontario, but any populations are localized within these states and provinces, if they persist (NatureServe 2015).

Rusty-patched bumble bee workers and males have yellow hair on most of the thorax and abdominal segments one and two with a rusty brown patch on the front half of the second abdominal segment. The hairs on the head and other abdominal segments are black. There is a patch of black hair in the middle of the thorax extending into a "V" shape toward the rear (Evans et al.2008, Evans 2009). Queens are larger with the same coloration except they do not possess the rusty patch. Queens are generally 21-22 mm long, 9.5-11 mm wide. Workers are 11-16 mm long and 5-9 mm wide and males range from 13-17.5 mm long and 5-7 mm wide (Evans et al. 2008).

Bumble bee queens hibernate over the winter, emerge in the spring, locate a nest site, and rear young (workers, males, and new queens). After new queens and males mate, all males, workers, and old queens die by the beginning of winter and new queens settle into sites to overwinter (Schweitzer et al. 2012). The best time to see queens would be early spring. Adults may be observed throughout the active months of April into November.

The time of year you would expect to find Rusty-patched Bumble Bee present, active, and reproducing in New York.