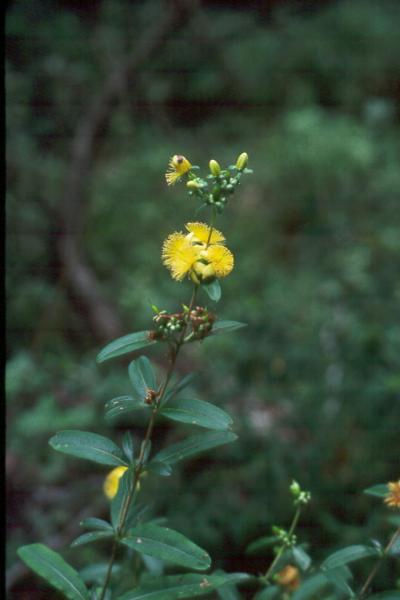 Shrubby St. John's-wort has a wide range of population sizes. In southeastern New York there are populations of just a few to dozens of plants, while in an agricultural setting in Cattaraugus county there is one population estimated to contain a million plants. It is certainly living up to its species name there.

There are five existing occurrences, two of which have more than 1000 plants. The best population has over hundreds of thousands of plants. The three remaining populations have less than 50 plants each and may not be viable long-term. There are six historical occurrences which still need to be surveyed.

The overall short term trend seems stable with three of the five existing populations sustaining large numbers over recent years. The remaining two small populations have not been resurveyed but were threatened and may not remain viable.

Shrubby St. John's wort was never known from more than six historical populations in New York and there are now five existing populations, so it has remained stable but at a low level. In a couple of places it grows very well and is one of the dominant plants, but it has not expanded to other areas of the state.

Management efforts need to preserve the open habitat where this plant grows and prevent succession by other woody plants. At the same time care must be taken not to directly impact plants during the maintenance.

Research is needed into the historical distribution of this species and how it expanded its range into New York. Was it introduced as an ornamental or was the introduction natural? Habitat preference should also be studied to understand why it grows very well in a few widely-separated places but has not expanded its range across the state.

In New York this species has been found most often in early-successional, human-influenced habitats such as powerlines and roadsides, associated often with oaks as well as with a diversity of other tree and shrub species (New York Natural Heritage Program 2007). There are many habitats, from swamp-margins to cliffs and woods (Gleason and Cronquist 1991). Swamp borders, thickets, meadows, fields, roadsides, sandy open oak woods (Voss 1985). Dry or damp sandy or rocky thickets, pastures and slopes (Fernald 1970).

Hypericum prolificum is found throughout most of the eastern US, ranging from Maine to Florida in the east and Texas to Minnesota in the west. In Canada it is known only from Ontario, where it is a species of concern.

Hypericum prolificum is a shrub up to 2 m tall with a spreading, bushy growth form and sharply 2-edged twigs. The leaves are opposite, articulate (jointed) at the base, linear to oblong or elliptic, entire, and 3-6 cm long by 4-15 mm wide. The flowers are in groups of 3-7 at the ends of the branches and in the axils of the upper leaves. They have 5 bright yellow petals ( up to 1 cm long), the center dominated by the many (more than 100) yellow stamens. The fruit are 3-parted, joined at the center, and 8-15mm long.

Hypericum frondosum is not known to be native in NY but may appear in (or escaped from) cultivation. It has terminal, solitary (rarely 2-3) flowers, and the placenta do not meet in the fruit center. Hypericum densiflorum ( restricted in New York State to Long Island) is a highly branching shrub with smaller fruits (up to 6 mm tall by 3 mm wide) and more flowers per inflorescence (7-many) than Hypericum prolificum.

Hypericum perfoliatum flowers from July through September, the fruits persist through frost and possibly into the following spring.

The time of year you would expect to find Shrubby St. John's Wort vegetative, flowering, and fruiting in New York.